Visiting journalist touches on Latinos, immigration in the presidential election 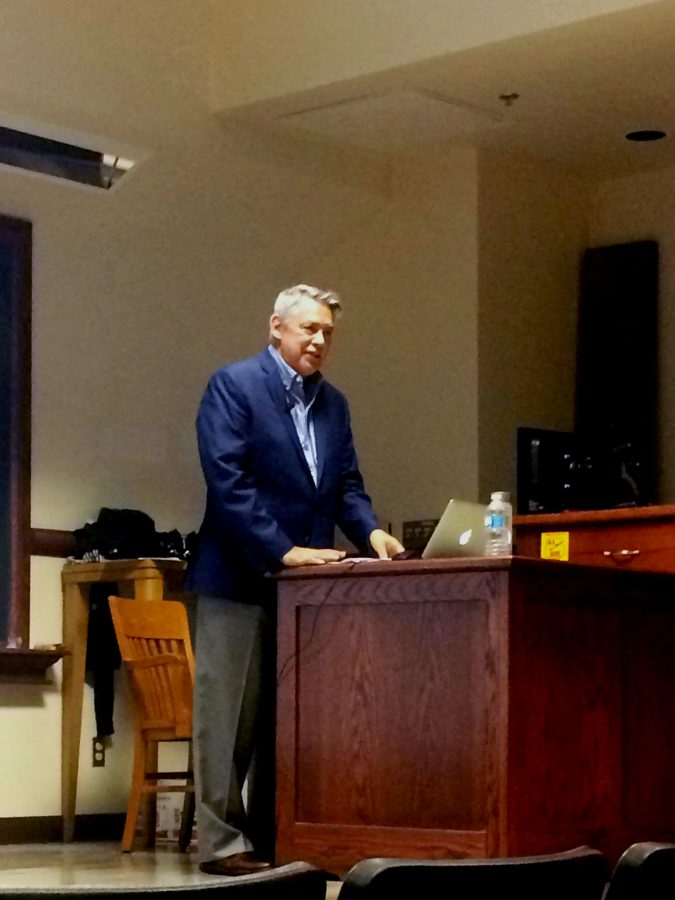 Juan Gonzales speaks at the University of Illinois on Monday, October 24, 2016.

In the moments leading up to the “Latinos, Immigration, and the Race for President” lecture, the audience chatter flowed between English and Spanish.

The group was gathered to hear journalist Juan Gonzalez speak at the University on Monday. Gonzalez worked at New York’s Daily News for 29 years, and he currently co-hosts “Democracy Now!” with Amy Goodman.

The primary sponsor of this event was the Global Diaspora and Migration Initiative. This group facilitates discussion on issues such as migratory communities, displaced peoples and transnational flows.

“One of the main aims of the initiative is to offer context and illuminate some of the most pressing and controversial aspects of the human experience,” said Dara Goldman, Spanish and Portuguese professor.

With the upcoming presidential election less than two weeks away, Gonzalez focused on the issues surrounding migration politics in the United States.

He called the issue “the true human rights issue of our time, and sooner or later justice will prevail in our cause.”

“Even today, the hardest, most medial and least appreciated work in the United States is being performed by Latino migrants,” Gonzalez said. “Those who pick the fruits and vegetables that nourish us, who butcher the meat and poultry we consume, who tend our lawns and repair our roofs, who repair our houses and haul our waste, who clean the hotels we use and the office buildings where we work, who wash the dishes and clean the tables in restaurants where we eat, who keep our universities clean and sparkly are invariably Latino.”

“Each of these represent separate wings of this complex thing called the American media,” he said. “And each with its own proud tradition.”

Gonzalez recalled education in his youth where Europeans were depicted as the “heroes,” with the “non-white people still seen as shrouded in darkness or in some lesser, inferior form of cultural development.”

“As someone born in Puerto Rico, and raised all my life in the United States, I learned virtually nothing in school about my own homeland,” Gonzalez said. “And so it was for so many Mexican, Cuban, Dominican, Salvadoran, Guatemalan, Honduran, Colombian, Panamanian children like myself grew up right here in the United States.”

Throughout his lecture, Gonzalez developed how media, politics and migration are interwoven. The media, he said, depicts minorities as “threats to society, rather than contributors.” Because of that, negative stereotypes of minorities influenced migration policies in politics.

Aura Perez, junior in ACES, said her big takeaway was about the political aspects of the lecture.

“It makes sense how connected (immigration and politics) are,” Perez said. “Immigration is a big focal point of this election.”

Gonzalez condemned the xenophobic rhetoric of this election, referring to Trump’s hateful speech against Mexicans and Muslims.

Sophia Ruiz, senior in LAS, said she believes Trump’s rhetoric turns many young people away from voting in this election.

“The young generation is less tolerable for that behavior,” Ruiz said. “But, we fought for the right to vote. To oppose it is problematic, since it shifts the outcomes of the election.”

Gonzalez believes that choosing from “the lesser of two evils” in this presidential election is crucial for promoting change in the political system. Gonzalez said that even though Bernie Sanders lost the Democratic Primary, he started a political revolution. It is up to young people to vote then act, to get the right people in office and be activists for progress, he said.

“(Young people) should vote, even if not for president,” Gonzalez said. “There’s the issue of state and congressional races, to see if there are other progressive candidates to vote from.”