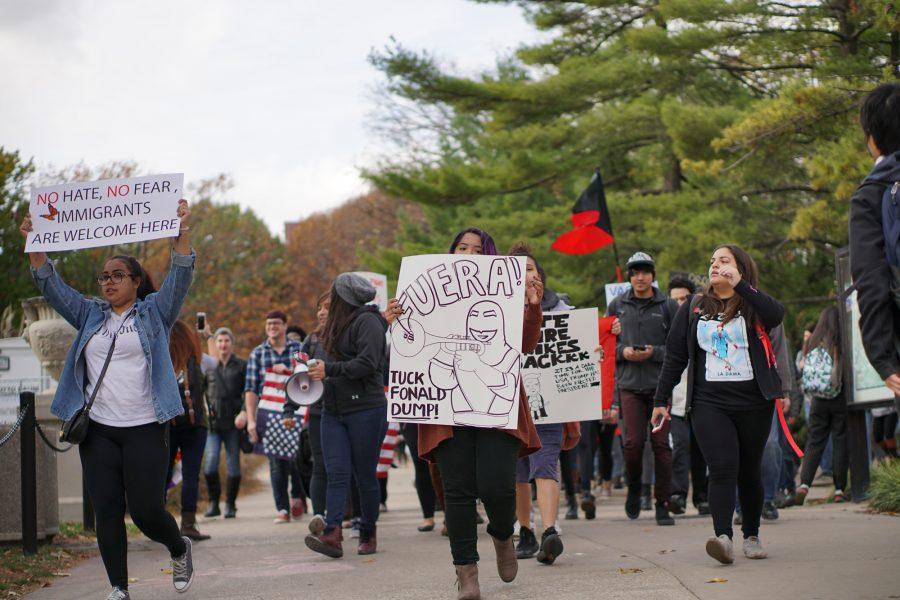 Students gather at Alma Mater to march through the Main Quad and down Green Street in order to protest President-elect Donald Trump on Friday.

“What ifs” dominated Monday’s Academic Senate meeting surrounding talk of civility in the wake of the 2016 U.S. presidential election results. While University experts are watching the campus closely, they have no prediction on what could happen.

Chancellor Robert Jones and Provost Ed Feser are currently attending the Association of Public and Land Grant Universities conference in Texas. The conference is focused on the impact of the presidential election and responses across all higher education, Peter Schiffer, vice chancellor for research, said.

“We are fortunate that we didn’t see the worst of violence and hateful engagements that some of our peers have experienced,” he said. “That unfortunately doesn’t mean that we don’t have concerns and many students, faculty, staff and members of our community are dealing with the real uncertainties and anxieties about the future.”

Bruce Reznick, professor in mathematics, asked about contingency plans for a change in Visa rules by Trump that would affect international students.

Schiffer said the Provost’s Office, Chancellor’s Office, Student Affairs Office and the Dean of the Graduate College, Wojciech Chodzko-Zajko, are monitoring the situation closely and thinking of contingencies. He believes this will be a topic of discussion at the conference where they can see peer’s plans as well.

A petition is currently circulating urging President Timothy Killeen, Jones and Associate Chancellor for Diversity Assata Zerai to make the University a sanctuary for undocumented community members. A sanctuary area has policies of not cooperating with federal immigrations authorities, so it would provide protection and safety for these undocumented citizens. The petition asks for a public declaration of support and protection for undocumented people.

Within his first 100 days as president, Trump said he plans to deport millions of immigrants and build a wall to divide the U.S. from the south.

“I am thinking particularly of students and faculty of color, muslims, LGBT and women, among others. I’m mainly here to say senators should see this as a moment when we need to mobilize,” she said.

Illinois Student Senate Vice President External Alex Villanueva spoke about a rally on Friday held in solidarity against the results of the election. The rally, held by the Mexican Student Association, was attended by around 1,000 students.

While walking down the Main Quad, the rally passed a table hosted by IlliniPAC, who were writing letters to veterans for Veterans Day. Villanueva said as the protesters walked by, some held up their middle finger and yelled profanities at the two members of the IlliniPAC booth.

“What I’ve heard from my peers is that they felt verbally assaulted and they were fearful,” he said. “Imagine being surrounded by people who were yelling the worst things possible.”

Shani Benezra, president of IlliniPAC, said protesters yelled “F**k your flag” when passing the booth, and said members of the booth never engaged with them and were just there to honor veterans.

Villanueva directed administration to call student leaders together to have a discussion about the relationships between organizations and how they can move forward to work together. When having discussions about the election going forward, he encouraged faculty to talk about civility and how to communicate with one another.

“I think there is no problem with being upset about the election, how it turned out, who was elected or about how the election was done on either side … but as we move forward, please encourage students to treat each other how we want to be treated,” he said.

Threats, intimidation or acts of violence will not be tolerated on campus, Schiffer said, standing in for the chancellor at Monday’s meeting. Feser and the Office of the Chancellor sent out a Massmail Nov. 10 detailing resources students can use.

Schiffer said they are investigating and taking action to every report that comes in, adding safety is the biggest priority.

The University of Illinois Office of Inclusion and Intercultural Relations is hosting a workshop, “Talking with [Racist] Uncle Joe,” on how to speak to family members, friends or coworkers about challenging topics Wednesday from noon to 1 p.m. The interactive exercise will teach participants how to stay true to one’s beliefs while responding in a group setting.

John Kindt, chair of the senate committee on faculty and academic staff benefits, said the repeal or revision of the act is likely to occur within the first 100 days of the new administration.

“Developments are expected, and I wanted to share that we have terrific experts who are watching this, but there is no way we can anticipate what is going to happen and how this is going to impact current benefits,” Kindt said.