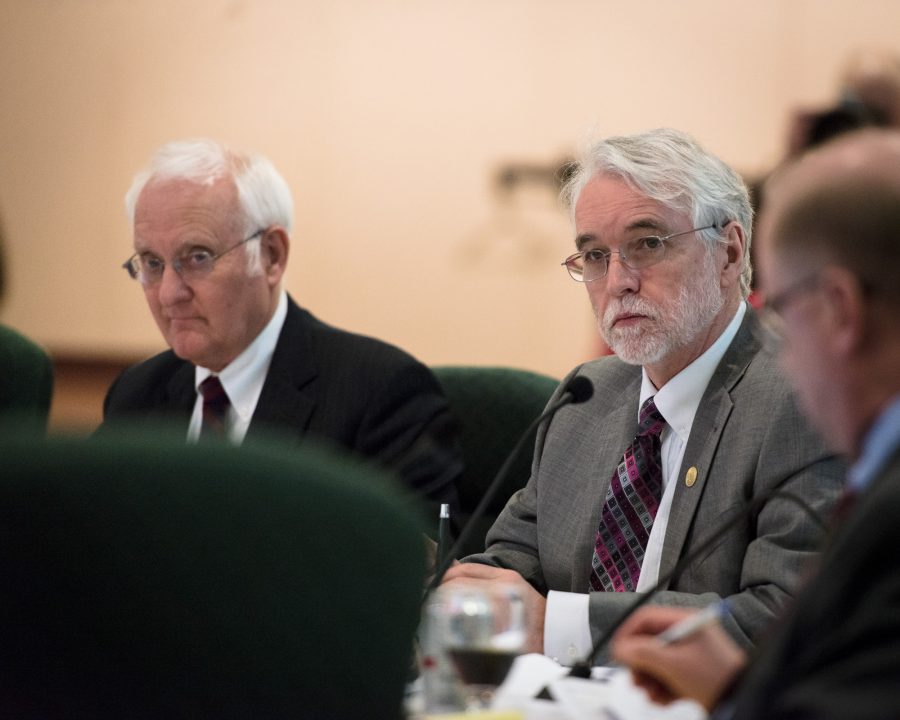 President-elect Timothy L. Killeen listens intently during the board of trustees meeting at the Illini Union on Thursday, March 12, 2015.

All three campuses, Champaign-Urbana, Chicago and Springfield  agreed to provide a foundation for new academic and research partnerships with Mexico’s largest university and the country’s leading research institute.

This four-day trip aimed to explore new educational and research collaborations in Mexico and involved meetings with government agencies and two of the nation’s top universities.

“These are some major universities in Mexico working with us,” University spokesman Tom Hardy said. “This will be an opportunity to diversify our international enrollment, and have more graduate students, doctoral students from our southern border, whereas we’ve been relying on Asia.”

The University adopted a new strategic framework earlier this year, seeking to build on the service to students, the public good and its global impact. The outreach effort is rooted in this new framework.

“We are committed to new partnerships at home and around the world that support our students and our excellence – promoting opportunity, diversity, and educational and research programs with global impact,” Killeen said in the news release.

In the agreement, the Mexican Science and Technology Council will provide 10 Mexican students every year with funding to pursue doctoral studies at any of the three campuses.

The total amount invested by the council during the five-year agreement will be about $7.5 million, which will be renewable. This amount covers the students’ tuition, health insurance and living costs.

Besides the agreement, officials also signed a letter of intent with the Department of Health in Mexico City. The letter established a joint research into the causes of two major health problems, diabetes and obesity, which are prevalent among the population that the department serves.

“It’s important for international universities to work together because they’ve got a lot in common and by working together they can be more impactful,” Hardy said.

This project is scheduled to be launched during the first quarter of 2017. The partnership will bring together researchers from the Department and the University of Illinois at Chicago, which is home to the nation’s largest medical school and notable faculty experts in diabetes and obesity research.

The project aims to explore social and cultural factors that might contribute to the two health problems by examining two sample populations of 200 each, one in Mexico City and one in Chicago.

During the visit, the University signed other agreements that initiated new partnerships with the National Autonomous University of Mexico and the National Institute of Public Health.

According to Killeen, the formal agreement signals new initiatives like student and faculty exchanges, and research collaborations based on previous informal works with both National Autonomous University of Mexico and the Institute.

The National Institute of Public Health is one of the largest public health institutes in the developing world.  The institute’s past collaborations with the University system include student exchanges and maternal and child health research with UIC’s School of Public Health.

The University delegation also met with students and officials from the Monterrey Institute of Technology and Higher Education, one of Latin America’s leading private universities.

The delegation worked on opportunities for faculty visits and summer study programs for students. They also promoted possible research collaborations in engineering, medicine and business.

In addition, the delegation met with Mario Molina, a winner of the 1995 Nobel Prize in Chemistry. Molina is a climate policy adviser to Mexico’s president and founder of the Molina Center for Energy and the Environment. The center focuses on exploring solutions to challenges related to environmental protection, energy use, climate change prevention and sustainable development.