At local airport immigration rally: ‘This is a nation of laws’ 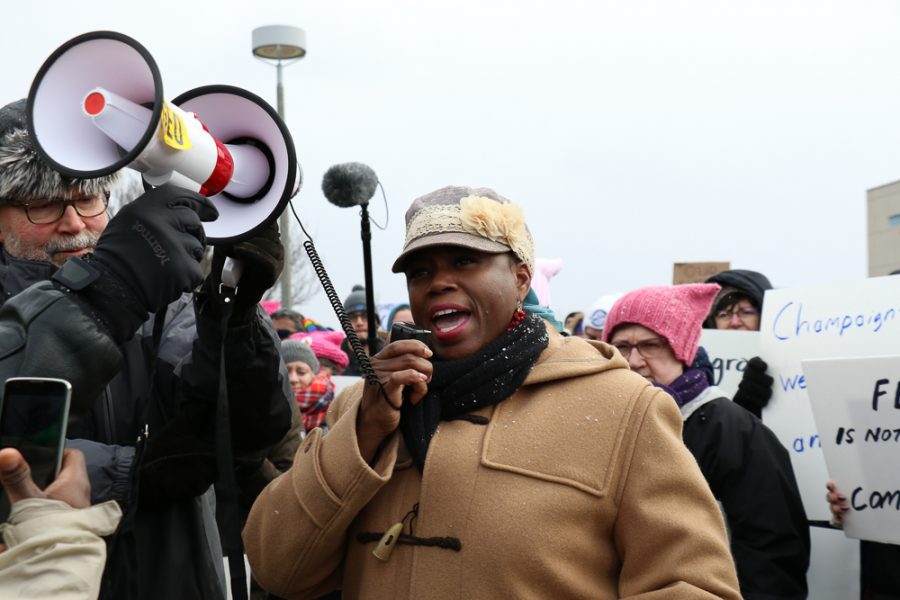 Annie Abbott felt frustrated, angry and sad. So, on Friday, the director of undergraduate studies in Spanish took to Facebook to vent about the executive order from President Trump banning certain immigrants for 90 days.

She said she would go protest the order at Willard Airport in Savoy. She didn’t expect a response, but her friends said they’d be there too. Realizing there would be a broader interest in the rally, Abbott partnered with Mohammad Al-Heeti to organize the gathering.

“I saw that people in other cities were going to the airports and spontaneously building this movement,” Abbott said. “Even though we don’t have immigration and those detainments were not happening here, I wanted the airport to be the symbol of where we take a stand.”

At 2 p.m. on Saturday afternoon, Abbott, her friends and other protesters arrived at the airport.

They began chanting, “No hate. No fear. Refugees are welcome here,” while more and more cars pulled in. Hundreds of people attended the rally.

Many protesters came with their signs, and a noticeable amount wore pink knitted caps from last week’s Women’s March, including Abbott.

Protesters marched in a loop outside of the airport. However, the crowd grew and so speeches began instead.

Rep. Carol Ammons and Urbana Mayor Laurel Prussing were among the speakers. Rep. Rodney Davis was noticeably absent, and Ammons made sure to note, asking “And where the hell is Rodney?” The crowd soon started chanting Ammons’ words.

“If you are truly for the people of East-Central Illinois, then you will get here to Willard Airport not too far, not too difficult to find,” Ammons said. “You will get here and stand with your Muslim people that you claim to represent.”

Prussing noted Urbana is one of only four sanctuary cities in Illinois. The others are Chicago, Evanston and Cicero. Though President Trump recently threatened to take away federal funding to sanctuary cities, Prussing said she is not afraid.

“This is a nation of laws,” Prussing said. “I think the new president is going to find that out.”

Essam Mohamed El-Naggar, visiting professor in ACES, said he is living in fear.

As an immigrant from Egypt, he’s worried the executive order will take him away from his two children. They were born in the U.S. He doesn’t want his family to split apart.

“We hope that the executive order will take some of these issues into consideration,” El-Naggar said. “Separating families has been the most important issue for people who live in this country for a long time and who have been here awhile.”

One of El-Naggar’s daughters, Salma, goes to University High School in Urbana. Though she’s worried too, she’s ready to stand up.

“This is our turn, us immigrants and people of color, to be active,” she said. “That we can make a difference.”

The El-Naggar family came together to rally for themselves and other immigrant families. Essam El-Naggar said he appreciates the support. He doesn’t feel singled-out.

“We’ve been part of the Champaign-Urbana community for the last 20 years,” he said. “We belong to this place.”