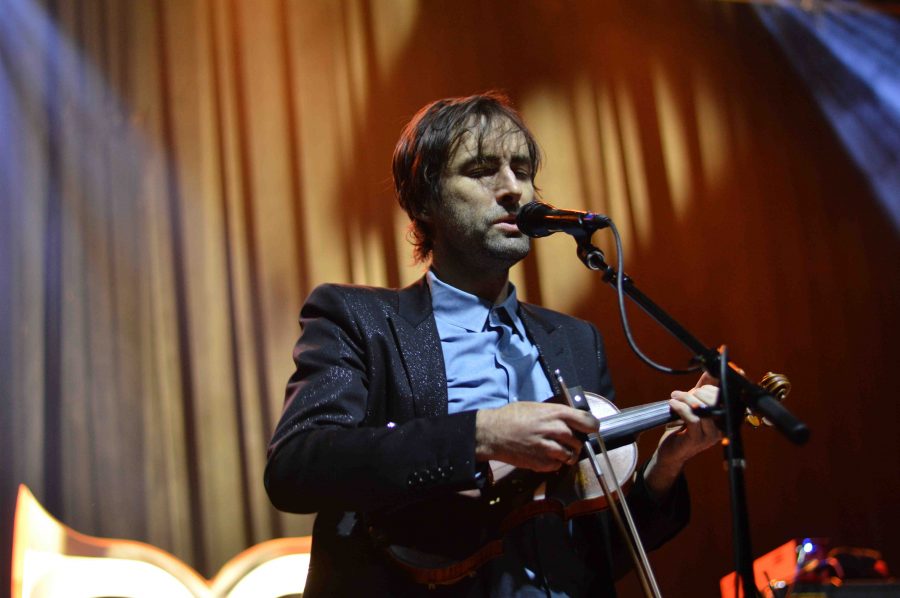 Watching Andrew Bird perform is like watching a casual, three-piece orchestra. The set is simple, the band doesn’t rely on gimmicks, and the music is raw and skillful.

Bird performed Monday night at Canopy Club in Urbana. Ryley Walker, a Chicago folk musician with a slightly heavier sound, opened the show at 8 p.m. until Bird went on for a 90-minute set.

Even the gramophone is more than just a quirky set piece – the $28,000 instrument was specially designed to spin. The rotational speed is controlled by a pedal and the speaker design creates a Doppler effect.

The gramophone, like Bird’s music, is just as technically impressive as it is music-focused.

With no preamble except the spinning horns, Bird launched into “Capsized,” the first single from his 2016 album “Are You Serious.”

It was clear that Bird loves performing because of his admiration for music. Emotionality is one of the key elements to playing an instrument, and his expressions while cradling his violin related the feeling of the song just as much as the lyrics.

Bird frequently coordinated the lights so he was in darkness, or so the focus was on his shadow. Either way, the real focus was always on the sound.

The first half hour of the set was just music – no banter with the audience besides the obligatory “Everyone alright?” while he switched from violin to guitar.

Instead, Bird interacted with the crowd – particularly those very familiar with his music – by teasing the music and extending a pause before diving back into a rapid violin solo.

The crowd filling both levels of Canopy Club was responsive, even though Bird’s style doesn’t necessarily lend itself to dancing. After a particularly long and impressive whistling solo, the applause was boisterous enough to drown out the music.

Despite being one of the smallest venues on Bird’s tour, Canopy Club seemed just as important to Bird as any arena venue. Although he’s played huge stadiums where the green room is actually the Detroit Pistons’ locker room, “nothing feels as good as this.”

Bird is from the Chicago suburbs, which added a personal touch for the audience. During the song “Pulaski at Night,” the crowd cheered and sang along to the line “Come back to Chicago City of, city of light.”

This is part of the beauty of Bird’s performance: it’s honest and accessible. Most of the songs come purely from the band, and the flourishes in each song are just Bird’s adept violin playing. The few times a loop pedal or other digital enhancements were used, it was very obviously done for artistic reasons – such as distorting his whistling to sound like a real songbird’s.

During one of his rare breaks from playing, Bird performed a request from a couple who had recently gotten engaged.

He had written the song, “Tables and Chairs,” more than 12 years ago and said that he had been reworking the song since then. He said it was written in a different time, and he had been changing some of the clever inside jokes to be more urgent and topical – the old lyrics are “not going to be much good against fascism.”

After a few more songs, the lights when down and the band exited the stage with the gramophone still spinning.

The crowd waited patiently for the trio to return. Bird didn’t disappoint by playing an encore, ending on “Fake Palindromes” and finally exiting to thunderous applause.