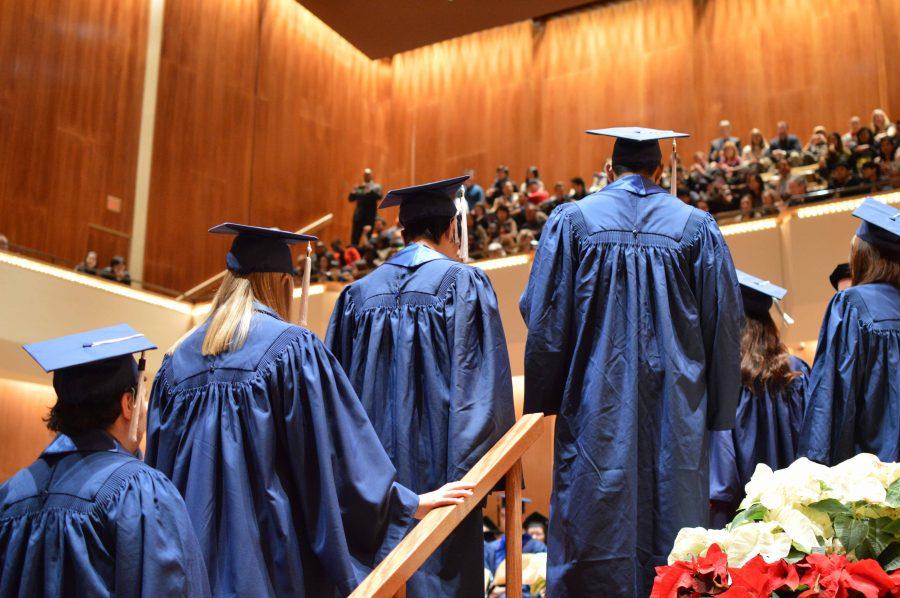 Graduating students from the College of Liberal Arts and Sciences walk onto stage during the fall convocation ceremony. A petition is circulating among students to bring former President Barack Obama to Convocation.

Two-thirds of recent graduates found jobs in Illinois after graduation, according to a report released by the Illini Success team.

The Illini Success initiative was launched in August 2014 to gather statistics on career paths of bachelor degree recipients. The second annual report was released February 2017 and looks at graduates from 2015-2016.

The data was obtained primarily through an online survey, with additional information collected from employers, the schools and colleges and career-oriented social media.

Seventy-two percent of graduates gained employment, while 27 percent continued their education. The largest amount of students employed from a specific college is the College of Media with 80 percent receiving employment.

Of those working, 82 percent landed jobs in traditional work environments with nine percent in transitional work and three percent in entrepreneurial or start-up companies.

Sixty-six percent of graduates secured jobs in Illinois with another nine percent staying in the Midwest area outside of Illinois.

“The results are informative in their own right, but more so given the protracted deliberations on public funding of our state universities,” Chancellor Robert Jones said in a press release. “This report is fodder both for the broader question of the impact of a world-class education and for the narrower question of the extent of our contributions to the state of Illinois and beyond.”

Of students who had internship experience, 39 percent were offered a full-time job as a result.

Salaries for full-time employed graduates averaged at $57,031, with the College of Engineering pulling in the highest salary at $71,856.

Julia Panke Makela, associate director for assessment and research at The Career Center, advised against making general conclusions from only two years worth of data.

“Comparisons based on the first two years of data would be premature and not very constructive,” she said. “But we are building toward a point where we will be able to explore trends and build inferences based on a more comprehensive research record.”

Megan Jones and Luke Cooper contributed to this report. In a previous version of this report the College of Education was listed as having the highest employment rate after graduation.