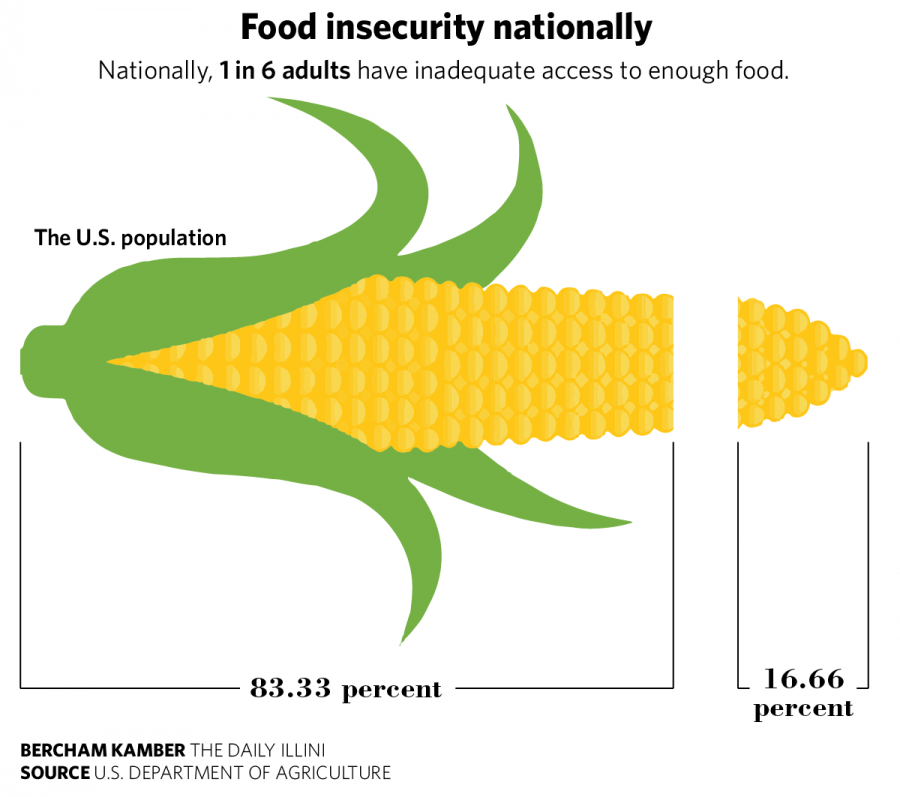 Alongside the University’s efforts to combat high levels of food waste, there also is a growing push to end student hunger.

An estimated 2 to 5 percent of University students face problems of food insecurity while on campus, said Dawn Aubrey, associate director of housing for dining.

Aubrey defines food insecurity as the lack of access to the healthy and sustainable food needed for an active lifestyle.

“There ended up being more of a light shined on it (food insecurity), because there were some studies that were performed,” Aubrey said. “The reality is that (the issue) is very quiet.”

A study conducted by the University’s School of Social Work surveyed 781 students, with 176 responding they have experienced a lack of food.

Two hundred and forty students responded that they know other students who have trouble finding meals. In Champaign County, 16.3 percent of households have trouble providing food.

While at the University, first-generation students are most likely to face food insecurity, said Aubrey.

“We know of cases of having a student, for example, send all of their resources home,” Aubrey said. “They max their loans because the family home is going to be foreclosed.”

In scenarios like this, the student is usually left with a limited amount of financial resources for other necessities like housing and food.

“Living on ramen noodles and frozen pizza is seen as college right of passage, but it can also be a result of inadequate access to nutritional food,” Longfellow said.

Aubrey said that students with University meal plans will often help out others and swipe friends into the dining hall that would otherwise miss a meal.

“It’s not unusual for a student with a meal plan to help their friends,” she said. “It’s something we’ve observed and we’ve been told.”

Aubrey, chairing the University’s food insecurity board, said the campus is taking several steps to provide for students and is growing in their efforts as more data becomes available.

In an attempt to show solidarity, University President Timothy Killeen signed the Presidents United to Solve Hunger initiative in December 2014. The worldwide initiative began to combat hunger on campuses.

The University also participates in the Zero Percent program, which allows organizations like University dining to post their leftover food on the website. From there, local food pantries can declare their interest and pick up the food for donation.

“In the event that there is food leftover, that food is donated,” Aubrey said. “As you can imagine, it’s not unusual for us to have 40,000 (leftover) meals going out in a day.”

Aubrey also began efforts in fall 2016 to get the University’s dining halls to accept Link cards, which are given to people who are eligible for Food Stamp benefits. Students who are unable to pay for meal plans could be able to use the benefits toward University food.

The University also partners with Illini Fighting Hunger, an RSO on campus that packages meals for food banks in the area, by buying bags of shelf-sustainable rice casserole from the group for students to buy for personal use, to give to friends in need or donate to food pantries.

Since fall 2016, students have donated over 6,000 meals through the partnership.

“You would be surprised by how many young people, like students, don’t have somewhere to get their next meal, so that’s always a concern,” Shah said.

The Wesley Food Pantry began offering specific hours for only students to come in and get food. In addition to their regular services, the first Monday of each month from 3 to 5 p.m. is devoted solely to students.

Longfellow said she will see students at both regular hours and student-only hours.

“We started our student only hours this school year to see if that would be attractive to students in need,” Longfellow said. “We haven’t yet seen large turnouts during those distribution.”

There is an average of less than 10 students utilizing services per month during the student hours, said Longfellow.

The University will continue to provide students with food assistance, though it may not be easy, said Aubrey

“There are very good people in our community that help,” Aubrey said. “It’s one of the most generous communities I have ever seen. But it’s not something that gets attention, for the sake of the person needing the assistance.”