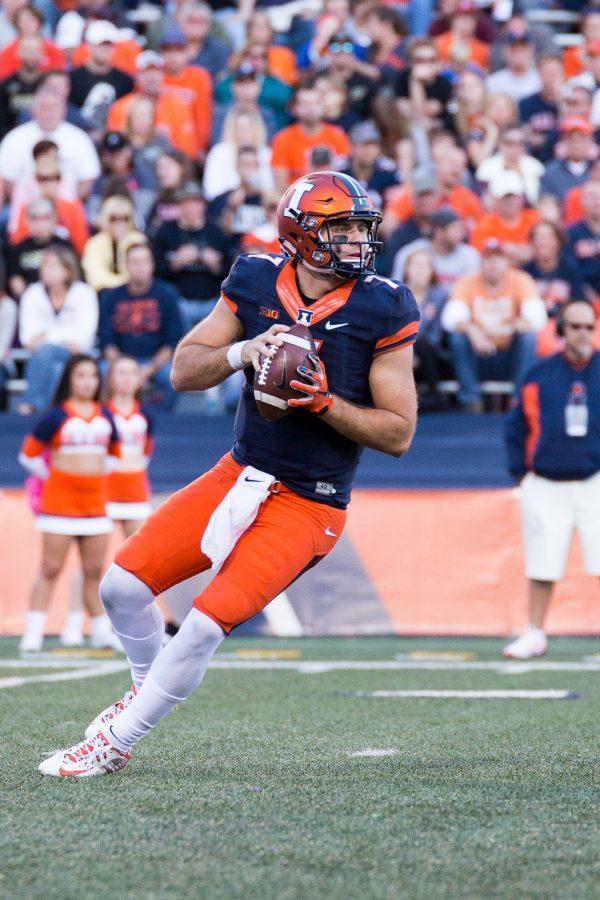 Illinois quarterback Chayce Crouch (7) looks to pass the ball during the game against Purdue at Memorial Stadium on Saturday, October 8. The Illini lost 34-31.

Smith said he enjoys the energy Crouch brings to the team, but he needs to be smart about the ways he uses it.

“Well, first off, he needs to learn how to slide,” Smith said. “But really excited about what he’ll bring throwing the football (as a) dual athlete. He is the undisputed leader on the team.”

In 2015, Crouch saw action in seven games, totaling 160 yards and two touchdowns through the air. He added 96 yards on the ground.

Crouch played in four games last year, starting in one. The junior led Illinois to a road win against Rutgers last season, throwing for 61 yards and a touchdown.

Wes Lunt was under center for a majority of the snaps last year for the Illini and primarily served as a pocket passer. Lunt threw for 5,900 yards and 36 touchdowns during his career at Illinois. The Illini’s offense will look different this year with a dual-threat quarterback leading the way.

Crouch’s best statistical game came in a loss to Purdue last season. Crouch compiled 137 yards and two touchdowns on the ground and 142 yards through the air. Lunt’s longest rush of his career, meanwhile, was 14 yards.

The junior quarterback will have more opportunities to find receivers with the return of an injury-plagued Mike Dudek and Malik Turner, who is coming back for his senior season.

Illinois also added wide receiver depth with the signings of Ricky Smalling and Carmoni Green in the past year. Both players were three-star recruits coming out of high school, according to 247sports.

Crouch will lead an Illini team that won three games last year. His first big tests as the undisputed starter will be against Western Kentucky and South Florida in the early non-conference slate — both teams won 10 games last season.

Crouch will get the ball when Illinois begins its season Sept. 2 against Ball State.