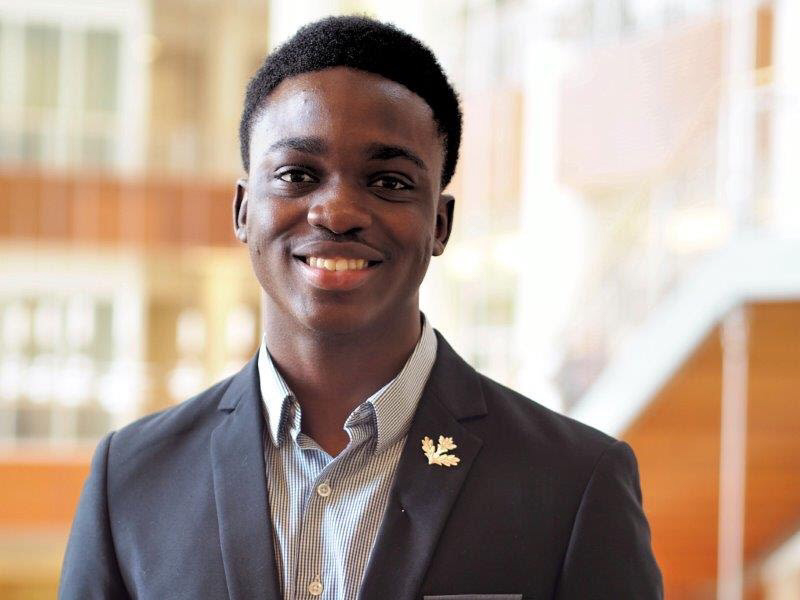 Awele Uwagwu, a sophomore in LAS, flew back to Nigeria when his student visa was terminated due to an overdue balance in his student account.

It was the weekend before the Jan. 29 class registration deadline, and Awele Uwagwu, a sophomore in LAS, suspected his student visa was about to be terminated.

Though his dad remained hopeful, by Monday, his family was still unable to clear the overdue balance on Uwagwu’s student account. With the overdue balance preventing him from registering for classes and maintaining his visa, Uwagwu flew back to Nigeria less than a week later. Two days after his flight, his visa was officially terminated.

It was his home of southern Nigeria, Uwagwu said, where the crude oil industry has caused extensive water pollution and oil spills, that motivated him to become a chemical engineer.

After the value of the Nigerian currency, Naira, plummeted in 2016, Uwagwu and many other Nigerian students at the University have found themselves unable to afford the costs of international tuition, said Faramola Isiaka, a close friend of Uwagwu’s.

“They tell everybody it’s a fixed (tuition) rate. But really, if you’re international and your money’s in Naira, it’s not fixed,” said Isiaka, senior in Engineering. “If you’re paying X amount in dollars and suddenly the currency you’re paying in gets halved in value, you’re basically having to pay double the amount.”

Isiaka assisted Uwagwu in setting up a GoFundMe page, enlisting the help of friends, family and internet denizens to crowdfund the money to pay off Uwagwu’s debt. Accompanied by a picture of a smiling Uwagwu, the page described Uwagwu’s 3.94 GPA, his work as a tutor for the Center for Academic Resources in Engineering and his volunteer work teaching chemistry to middle and high school students.

“If you just look at what he’s done, what he’s doing, where he’s from and what he’s about, you can tell that there’s a lot of untapped potential,” Isiaka said. “I think he’s going to be a very important person in the future. I still think that.”

Though Uwagwu’s admission to the University still holds, he’s uncertain about returning. Like other international students who have found themselves in similar situations, Uwagwu is working on applications to universities with programs of a similar caliber but with lower tuition and more aid for international students.

International tuition, which can cost up to $42,796, is more than double the cost of in-state tuition, and international students are ineligible for much of the financial aid given to in-state and out-of-state students.

According to Uwagwu, the $900 in merit-based aid he received freshman year was barely enough to scratch the surface of the nearly $50,000 he needed to pay.

“We have a 150-year legacy of putting an affordable and accessible higher-educational experience in the hands of those who choose to enroll here, and our international enrollment continues to grow because of this reputation,” said Martin McFarlane, the director of International Student and Scholar Services, in an email.

Isiaka, however, called the University’s unwillingness to help international students a “disservice, not just to the University, but to the world,” saying many students come to the University with the intention of returning home to contribute to their countries, while others were never given the opportunity in the first place.

“I understand the way things work, and it may seem selfish, but I feel like there could be a better system to at least support international students with a merit scholarship,” Uwagwu said. “I really wish things could be more merit-based and not necessarily about where you’re from, what country you’re born in, because at the end it’s all chance and I think everyone should get the best education they can get.”