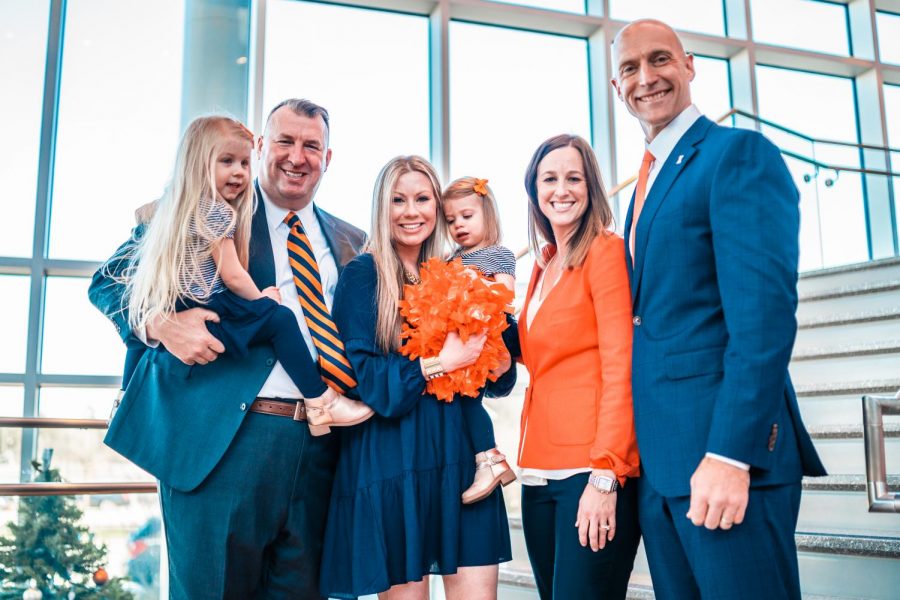 New Illinois head coach Bret Bielema and his family pose for a picture with Athletic Director Josh Whitman at the Smith Center on Monday.

At 9 a.m. on Sunday morning, Bret Bielema heard his oldest daughter Briella wake up. From meeting with Illinois athletic director Josh Whitman earlier in the week to traveling to Penn State to watch his new team, Beliema’s life had been very football-focused the last week. He had been missing quality time with his daughters.

So while his wife, Jen, hopped in the shower, Bret and Briella laid in bed, grabbed his phone and searched up the famous I-L-L I-N-I chant — a sound Bret can’t wait to hear Illini fans shouting as he walks through Grange Grove onto Zuppke Field come September.

Bret and Briella spent the better part of that morning teaching each other the chant and practicing for when they headed to Champaign less than 24 hours later.

“I just can’t imagine having any greater moment than that as a father,” Bielema said while fighting back tears in his introductory press conference.

Bielema got emotional multiple times while talking to the media Monday morning. While Bielema’s husband and father-daughter status is relatively new in his life, family has meant everything to him, beginning with the long days on his dad’s farm taking care of thousands of hogs with his siblings.

“I know right now sitting in Prophetstown, Illinois, are my mom and dad, Arnie and Marilyn,” Bielema said as tears welled in his eyes. “I thank them for raising a kid the right way. Telling me no when I need to be told no and telling me yes when I needed to be told yes.”

When Whitman was conducting his swift coaching search, a couple of major factors were on his mind. One, he wanted someone who was looking to settle down at one spot not someone just “looking for the next big job.” And perhaps the biggest factor — at least to Illinois fans — was finding a coach who could recruit the state, arguably Lovie Smith’s biggest struggle in his five-year tenure.

And the person who passed both those tests with flying colors: Bret Bielema.

Bielema grew up about eight miles away from Prophetstown, a town near the Quad Cities with dreams of becoming a three-time Heisman Trophy-winning linebacker for the University of Illinois before taking his talents to the Chicago Bears.

Those goals — uncovered from Bielema’s third-grade teacher once he became a hot-shot head coach at Wisconsin — didn’t exactly come to fruition. But, they weren’t far off.

Instead, Bielema played four years as a defensive lineman at Iowa, originally joining the team as a walk-on, but earning a scholarship after freshman year. After coaching at his alma mater as an assistant for eight years, Bielema had a two-year stint at Kansas State before making his way to Wisconsin, where he started his head coaching career.

Seven seasons, six bowl games, three Big Ten Championships and a 68-24 record later, and Bielema had left his mark on the Big Ten. It was Bielema’s next stint, however, that was a turning point in his life.

“As you mold this thing, and understand how you evolve as a coach, a lot of times, people think you’re so much, and so greatly defined by your success,” Bielema said. “But as a man, as a person that has been in this profession a long time, you’re actually more defined by your adversity. And obviously, I left one institution to go to another with an idea of being highly successful.”

In 2013, Bielema walked into Arkansas with confidence and a winner’s mentality, ready to turn the SEC  West program into a success story. In his first year with the Razorbacks, Bielema won just three games — a season Bielema will never forget. But, he followed his first disappointing season as a head coach with three-straight bowl appearances.

It wasn’t enough. Bielema was fired from Arkansas, wrapping up his time in the college football world for the time being.

“The things that really motivate me are the failures,” Bielema said. “When I left my previous institution, they gave me a letter that said I was fired without cause because I didn’t win enough games. And I know what I did, and what I accomplished in that building, and that wears on my heart to this day.

“To walk out of there, on someone else’s terms, you know, to this day is something that motivates me on a daily basis,” Bielema said.

Bielema followed his tenure at Arkansas with nearly three seasons in the NFL, two of those spent with future Hall of Fame coach Bill Belichick and the Super Bowl-winning New England Patriots.

Bielema has a long track record of learning from some of the best football minds to ever live. He played and coached under Hall of Famer Hayden Fry at Iowa, coached with Hall of Famer Bill Synder at Kansas State, and took the reins from Wisconsin’s Barry Alvarez, another Hall of Fame coach.

“I’ve seen a lot of really good examples of (how to) handle your demeanor, approach things in a certain way and be a lot more even keel,” Bielema said. “So I think I’ll always be confident. I don’t mind walking into the room and letting people know that.”

But after traveling the country, watching the greats and learning from his failures, Bielema is back at home and itching to “have (his) own ship again.” And he’s wasted no time in taking control.

Sunday morning after flying to Champaign, Bielema met with the team for the first time. No cameras, no press, no coaches, just him and the near-100 man roster.

“I’m not a publicity guy, I’m not a guy that’s trying to create something that’s artificial, or put something out there that’s not real,” Bielema said. “I just wanted those guys to know that team meeting was between me and them and the information that we shared was, was real.”

Whitman was one of the only other Illinois Athletics members in the room. And if there were any lingering doubts about the hire, they quickly disappeared as he saw the room light up with energy as Bielema sold his plans for Illinois to the team.

“Anytime you put somebody new in that room, you’re carefully watching to see how people respond,” Whitman said. “And I just couldn’t have been more pleased with the way they reacted yesterday in the meeting. Again, that’s just one short conversation, but it gave me great hope and confidence that that will lead to another conversation, another conversation, even increasingly more personal conversations and one on one discussions.

“(It) gave me a lot of hope that there will be a really strong bond formed between him and those players.”

Bielema felt that instant connection too. After meeting with everyone, Bielema met with the leadership council and then players who could potentially pursue the NFL in the spring or simply move on with their lives.

The Illini haven’t been consistent winners since the late 1980s, early 1990s under Mike White and John Mackovic when Bielema was busy being Illinois’ rival. The Illini fan base is desperate for a winner. In the past five seasons, Lovie Smith put up a 17-39 record and a 10-33 mark in the Big Ten.

Building Illinois back up will be a monumental challenge, but when Bielema told reporters on Monday that Illinois was “a destination spot” for him, he was genuine. That has been apparent just three days into the job.

Hours removed from announcing his position with the Illini, Bielema called the Illinois High School Football Coaches Association to express his interest in connecting with in-state schools. Within days of taking the job, Bielema said he has already spoken with dozens of high school football coaches.

Bielema also had met with the majority of Lovie Smith’s coaching staff on Monday, letting them know his plan. He hopes to have an established coaching staff of his own by late January.

Bielema, 50, is deep into his coaching career, but he is nowhere near finished. Still young and looking for a place to put his family roots and final impression into, Bielema won’t take five or six years to win at Illinois — success will start in September.

“He’s got unbelievable experience tremendous success,” Whitman said. “But he’s still at a stage in his life, where he’s got this huge chapter to come that I think could be, I hope, will be the defining chapter of his career. I think when people look back at the legacy of Brett Bielema football coach, I hope they start with the University of Illinois, based on what’s to come here and his future.”

And for a kid with an Orange Krush towel hung up in his room, Bielema’s life has come “full circle.” And after experiencing adversity and missteps, Bielema is determined to make this chapter in his life the most important and successful one yet.

To achieve that goal, Bielema will carry his father’s lesson from the farm back in Prophetstown, where his legacy is forever celebrated and cemented with a “Hometown of Bret Bielema” sign.

“If you’re going to do something, do it right, so you don’t have to do it again,” Bielema said. “So we’ll build this baby up the way it needs to be done.”