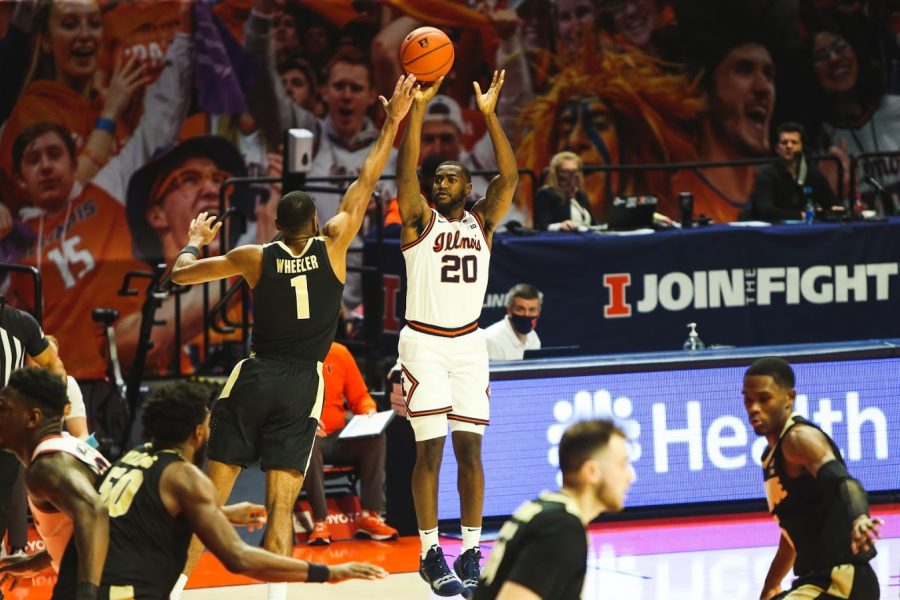 Senior Da’Monte Williams takes a shot during the game against Purdue on Saturday. The Illini won the game 66-58.

The Illini didn’t have their strongest outing of the season on Saturday night as they hosted Purdue, but a 10-point lead at halftime and a couple of offensive runs late in the second half secured them the win.

A quieter game from Ayo Dosunmu led to strong nights from some of Illinois’ role players like Da’Monte Williams and Adam Miller, but a disciplined defensive outing, especially in the paint, gave the Illini an edge as they move to second place in the Big Ten behind Michigan.

While playing against a mid-tier conference team, the Illini proved they can still win a game even if Dosunmu doesn’t put up 30 points.

In just his second game this season with less than 15 points, Dosunmu was a big factor in the first half, scoring 12 points. The junior ended his team’s three-minute scoring drought early in the game with a transition layup. He also hit a couple of shots late in the first half to extend the Illini’s lead.

Dosunmu didn’t score in the second half despite playing 17 minutes; however, he only took three shots with no free throw attempts. The stat line could make it look like Dosunmu had an off day, but it was the little things like five rebounds and three assists that Brad Underwood was pleased to see out of his star on Saturday.

The freshman finally got a couple shots to fall after going scoreless against Indiana. Finishing with 10 points — his most since putting up 14 against Minnesota on Dec. 15 — Miller hit two of his six three-point attempts and made four of seven free throws. Even Miller’s misses look good, and Underwood believes more shots will begin to fall because “no one works harder than Adam.”

Miller has also flashed improvements on the defensive end as Underwood emphasized the freshman graded out the best defensively against Indiana. For the majority of the first half, Miller guarded Brandon Newman, limiting him to five points.

Frazier has combined for just 16 points in the last three games — including five against Purdue — but his defense against opponents’ top guards has been irreplaceable. Guarding Sasha Stefanovic to start the game, Frazier kept him out of the lane and limited him to just one make in the first half which was a result of early-game miscommunication.

Frazier was all over the ball and disrupted the passing lanes frequently, finishing with three steals and three defensive rebounds. He also had three assists and committed just one foul. When speaking with media after the game, Underwood praised Fraizer’s leadership and his ability to remain calm when Purdue went on a 17-0 run.

There’s no doubt Williams was the star of the game, scoring 12 points on 50% shooting from the field. After the Indiana game, Underwood said he challenged Williams to be more aggressive on the boards, and it paid off as Williams secured a double-double with 10 rebounds.

While Williams’ stats are impressive, his shot selection and timing against the Boilermakers was even better. With just a five-point lead close to halftime, the Illini needed a boost and Williams provided it with back-to-back threes. His third three-pointer was even more influential as he snapped Purdue’s 17-0 run to start the second half.

Another night, another double-double from Cockburn. Against Purdue, the Illini big put up a team-high 14 points and 10 rebounds while adding two blocks. Cockburn had one of his best defensive outings of the season, helping limit Purdue to 20 points in the paint.

Going up against 6-foot-10 forward Trevion Williams and 7-foot-4 center Zach Edey, Cockburn had his work cut out for him. But the sophomore held his own and was often patient with his shots, not just tossing them up. And, of course, his couple dunks and alley-oops were very entertaining.

The biggest thing with Cockburn is continuing to improve his hands and being strong with the ball when he gets the rebounds.

Curbelo has once again stirred up the starter vs. bench player conversation as his presence has continued to make the Illini offense better. There are not many plays Curbelo can’t make and his ball-handling and passing ability help space the floor out and give players like Dosunmu or Williams open shots.

A no-look pass to Williams, an alley-oop to Cockburn and a dunk of his own highlighted the freshman’s Saturday night. But again, it’s his efforts on defense that are most noticeable to Underwood. His communication and instinct on that end of the ball have steadily improved as he has started to disrupt the passing lanes.

Very little production came out of the junior forward against the Boilermakers, as he finished with zero points, two rebounds and a block. Because Purdue is a bigger team, it made more sense for Underwood to play Cockburn more.

Bezhanishvili’s energy on and off the bench, however, earns him some bonus points and it’s obvious his positivity is contagious and helps keep his team from getting too low.

Hawkins, the less talked about freshman of the group, proved why he will be a valuable player down the road for the Illini. Playing over Jacob Grandison on Saturday, Hawkins scored five points, including a three-pointer in the second half. Hawkins was also strong on defense in his few minutes of play, grabbing two rebounds and recording a block.

Underwood cited a couple of great weeks of practice from Hawkins as the reason why he played over Grandison.