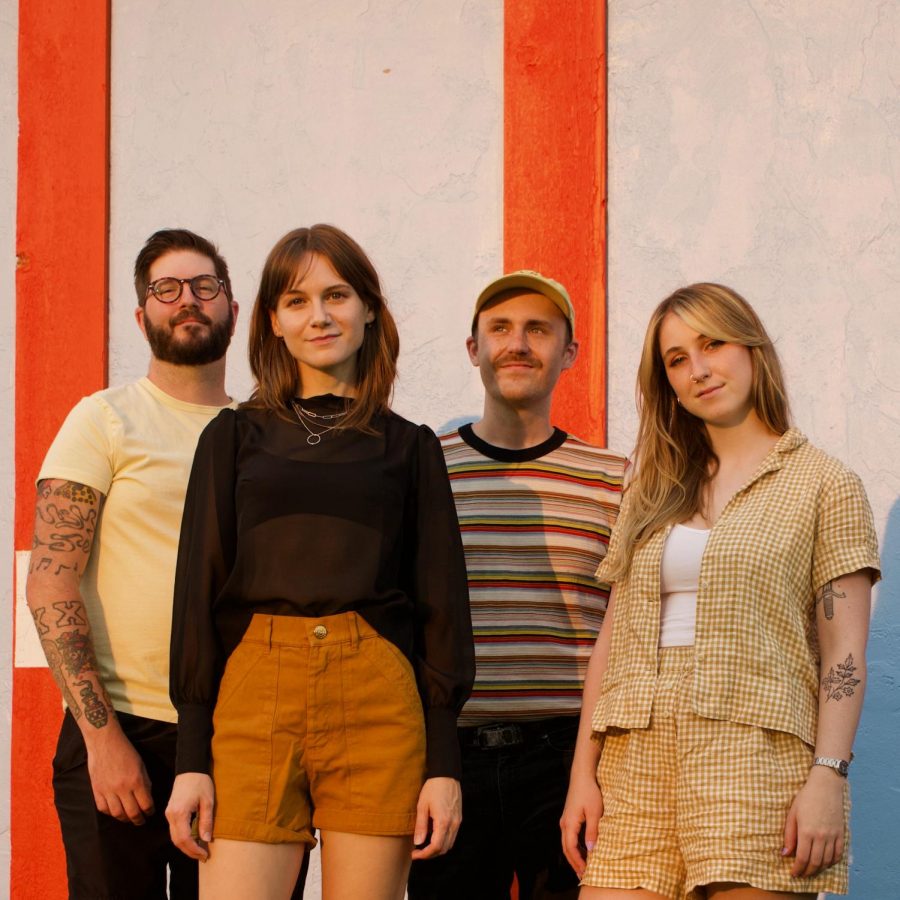 The band members of Nectar pose for a photo. Nectar will be performing at Pygmalion Thursday.

Over the past year, there has been an absence of shows, which has put many musicians and artists temporarily out of commission. This is not the case for Champaign’s own indie-punk band, Nectar, who has been busy releasing a single, practicing for its Sept. 23 Pygmalion set and preparing for its upcoming sophomore album release.

Next week, the band will perform at Pygmalion, a multiday music festival held in Champaign-Urbana. This set will be Nectar’s second time playing at Pygmalion.

The band will perform at 8 p.m. on Thursday, Sept. 23, at Nola’s Rock Bar in Urbana. Audience members must be 18 years or older. Also performing that night are Retirement Party at 9 p.m. and at 10:15 p.m. Dogleg is performing.

Glowacki is looking forward to the band’s appearance at Pygmalion, saying she has a “newfound gratitude” for live performances, especially after experiencing a lack of shows this past year.

Nectar’s setlist for Pygmalion will include an energetic mix of the band’s old and new songs to match the energy of Dogleg and Retirement Party, Glowacki said.

The setlist will also include the band’s latest single, “Routine,” which was released on Sept. 9. Glowacki said the tune is inspired by the monotony of day-to-day life and learning how to find comfort in the routines she relies on, such as feeding her cats.

The single’s artwork is a photograph that was taken by Glowacki and her friend, Claire Daly, depicting a bird’s nest with two bright blue robin’s eggs that were abandoned on Glowacki’s porch.

Glowacki said she found the visual beautiful and sad and related the image to “Routine,” saying, “With the theme of the song and even just the word ‘Routine,’ there’s connections there with the routine of the seasons coming and going, birds laying eggs every year.”

Nectar played three shows this summer in Mahomet, Springfield and Urbana. Glowacki said all three shows were special for different reasons, especially because they were the band’s first gigs in more than a year.

“It felt safe, too,” Glowacki said. “So it felt good to kind of ease our way back into shows in a way that still felt safe and comfortable for everybody, and to reunite with friends that were playing with us or coming to see us. So, it was a really welcoming experience.”

The band’s first summer show was at the Rose Bowl Tavern, which Glowacki said felt like, “a really perfect first show back, being at home in Urbana.”

Performing at the Rose Bowl Tavern was a fulfilling experience that solidified her feelings as to how much she loves playing music, Glowacki said, saying the show was like a “welcome back or waking up sort of scene” for many local bands.

On Oct. 24, Nectar will be playing at Nightshop in Bloomington, Illinois with Bottom Bracket and Hit Like a Girl. Glowacki said she’s looking forward to the gig, saying, “It’ll be a really fun show.”

If she had the opportunity to perform at any music festival, Glowacki said it would be a dream to perform at the Pitchfork Music Festival in Chicago, though she also likes the idea of performing at festivals in beautiful settings or cool locations.

Nectar is preparing to release its sophomore album early next year, and Glowacki encouraged readers to “hang tight” until the band is ready to announce more about the release.

She said she’s excited to share the album, saying, “I feel like it’s just another part of myself that I’ll soon be able to share with people.”

“I’ve never worked so hard on something before,” Glowacki said. “So I feel extremely proud and eager to share this with everyone because I know I have given it as much attention and care as I could have in all aspects.”

To purchase tickets to Pygmalion, visit thisispygmalion.com/nectar/. To listen to “Routine,” check out nectarnectar.bandcamp.com/track/routine.