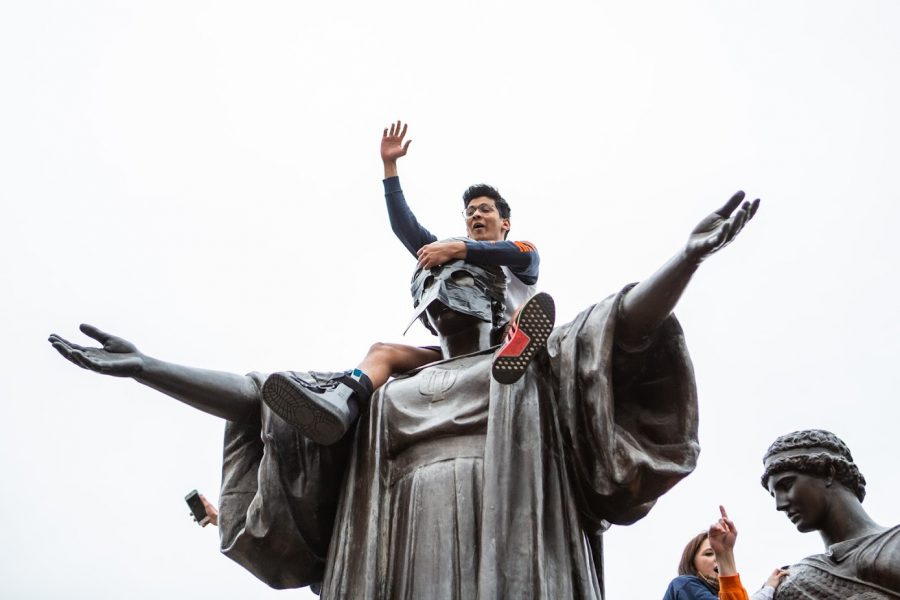 An orange wave of cheering students filled Green Street soon after the Illini won the Big Ten Championship Sunday afternoon.
Awarded No.1 seed in the Midwest region for the first time since 2005, it was the fourth time in school history for Illinois.
Katie Sackrison, freshman in Education, was walking on Green Street with her friend when the game ended. When they saw a crowd of students rush past them, they knew Illinois had won the game.
“The energy in the air, you could tell everyone was so happy and it was just like such an accomplishment, even for the school,” Sackrison said.
Sackrison followed the crowd headed to Alma Mater.
“There were people climbing Alma,” Sackrison said. Literally on top of her, at the highest point.”
Ali Abdullah, sophomore in Gies, was watching the game with his friend who lives on Green Street.
Around 10 minutes after the game ended, Abdullah saw a “huge swarm of people” running toward the Main Quad and the Union.
According to Sackrison, the celebration felt surreal because she hadn’t seen so many people together in one place due to COVID-19.
“I expected a lot more people to be like worrying about COVID.,” Abdullah said. “I thought everyone would be wearing their mask.”
According to Abdullah, around half of the students in the crowd were either not wearing masks properly or not wearing them at all.
Notable events of the celebration included someone lighting fireworks, as well as a truck trying to drift but subsequently popping a tire on Green Street.
The celebrations went into the evening, with the street being filled with more people than usual.
“At some point I was like, I don’t know if the cars are honking for them to get out of the street or because they are celebrating that we won,” Sackrison said.
Illinois has clinched an NCAA Tournament berth after eight seasons and will be playing Drexel Friday.
“I feel like since we had such a good team this year people have been really tracking the progress,” Sackrison said. “And I know a lot of people are excited for March Madness. They think we’re going to make it to the Final Four. And I feel like celebrations for that would be even bigger.”