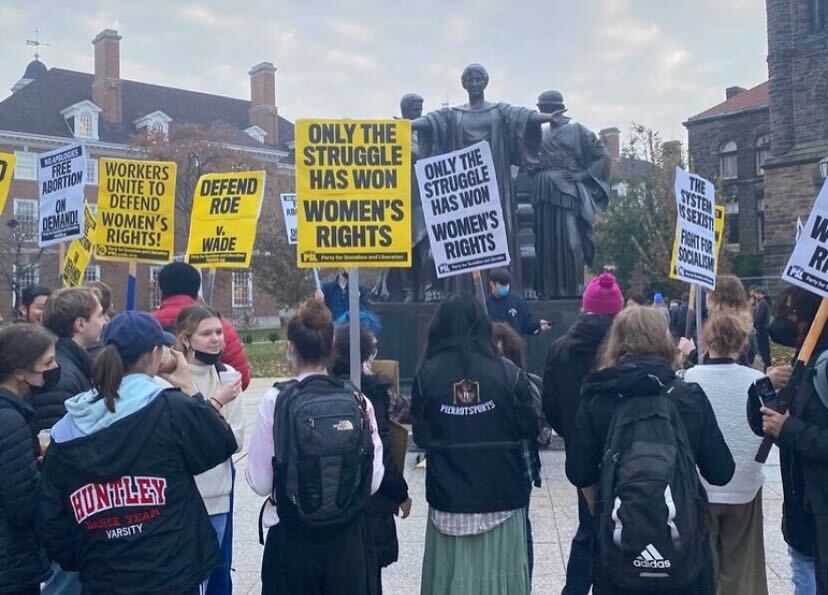 A group of students protest at Alma Mater for a rally set up by PSL on Dec. 2. The rally was in defending Roe v Wade in response to the recent Supreme Court decision.

The Party for Socialism and Liberation hosted a rally advocating for abortion rights in front of the Alma Mater Wednesday in wake of the Supreme Court case on the topic.

The Supreme Court has agreed to hear arguments in Dobbs v. Jackson Women’s Health Organization, a Mississippi case. This case is evaluating whether abortions should be banned after 15 weeks.

Esther Whang, a student speaker at the rally, opened her statement by expressing her and the crowd’s frustrations and anxiety about the situation.

Whang explains that Roe v. Wade protects a woman’s right to choose whether or not to terminate their pregnancy “without excessive restriction from the government.”

“It is already difficult for many people to receive abortions across the United States of America,” Whang said. “External laws have already restricted abortions to low income families, individuals of color, LGBTQ+ communities and those living in rural areas.”

Whang notes how, if Roe v. Wade is overturned, abortions would be illegal in a minimum of 20 states and three territories in the U.S. These areas include at least 20 million people.

“I am here today to make sure that those that are oppressed are heard, and those voices who don’t have a lot of say in a lot of situations with the government right now are heard,” Whang said.

Leah Tritabaugh, member of the Young Democratic Socialists of America at the University, was also a speaker at the event. She, too, expressed her frustration on the Mississippi case.

“I am sick and tired of demanding basic rights year after year,” Tritabaugh said. “Time and time again, we find ourselves stuck in this back and forth game of tug of war with our freedom on the line … if this isn’t the land of the free, then what are we?”

Hrant Kebantsi, a member of the PSL, believes women’s rights and body autonomy are “fundamental human rights,” and the PSL is passionate about preserving those rights.

“We wanted to mobilize today because the Supreme Court is hearing arguments that could strike down Roe v. Wade and the danger to human rights to their bodies across the country,” Kebantsi said.

Kebantsi emphasizes that the PSL is passionate about preserving these human rights as they are being attacked, and this led to the organization arranging the rally.

“We feel it’s really important to come out and build strength to fight against this grave and gross threat to human rights, ” Kebantsi said.

Roe v. Wade has not yet been overturned. The Supreme Court heard the arguments of Dodds v. Jackson Women’s Health Organization on Wednesday, and a decision is expected by the end of the 2021-2022 term.