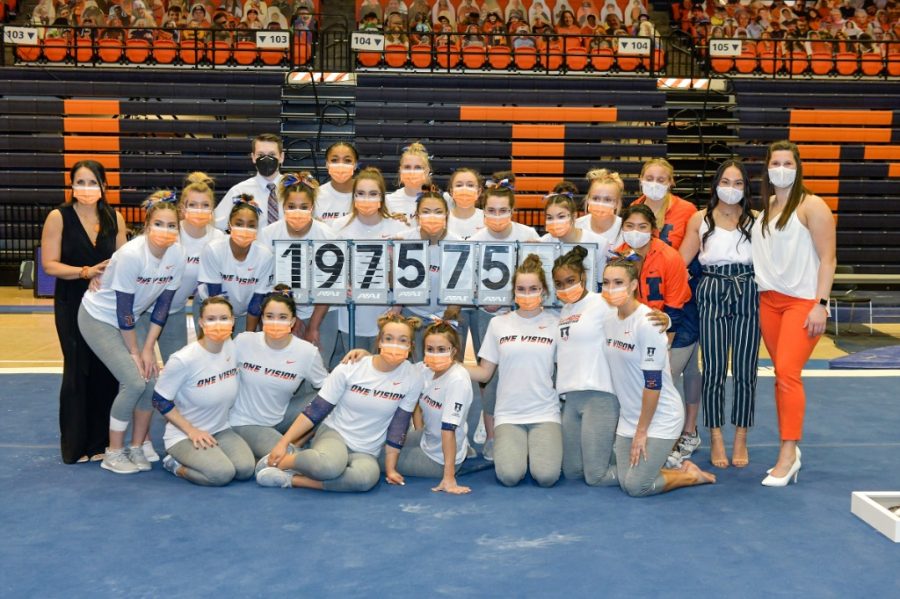 The Illinois women’s gymnastics team poses for a photo with a scoreboard showcasing their new all-around record. The team is using program records as motivation to compete to the best of their ability.

Heading into a conference tournament, everybody wants momentum or something to give them radiating self-confidence, whether it’s a win or even a great week of practice. But, what the Illini women’s gymnastics team did was on another level.
“It means a lot to the program, because I think it means a ton to the student athletes that bought into the vision four years ago,” said head coach Nadalie Walsh. “Where we’ve been talking about wanting to break the school record and accomplished some major milestones. So for this group of young women, to be able to conquer that milestone, I think is a really great victory and a win for not only us, but the people in the program before us.”
Right before the competition, the coaches could sense a slight difference in the team’s attitude and body language. There was a different type of happiness and natural confidence in the air. Everything seemed easy leading up to the meet, and they just had a good handle on all of it.
The Illini broke two team records by getting the highest score in program history with a 197.575 and the best on beam with a 49.525. The team feels like they can hang with anybody, and this embodies that mindset.
Multiple gymnasts also tied or broke 13 personal records. On vault, sophomore Mia Townes broke her personal best with a 9.925. Senior Nicole Biondi, sophomore Mia Takekawa and freshman Abby Mueller tied theirs with a 9.900, 9.800 and 9.775, respectively.
On bars, Biondi and freshman Amelia Knight broke their bests with a 9.950 and 9.925, respectively, while senior Rachel Borden also tied hers with a 9.850.
On beam, Townes and junior Shaylah Scott broke their bests with a 9.950 and 9.875, and Borden tied hers with a 9.875.
Townes and freshman Kaitlyn Ewald both broke their career-highs on floor with a 9.925 and a 9.825, respectively. Biondi also broke her all-around high score with a 39.525.
The Illini started out the season hot, winning their first three meets and six of their first seven road matchups. However, things got bumpy from there. They hadn’t won a meet since Feb. 13 against Penn State, and it was their only win since Jan. 23.
They had their struggles, but they were close. We saw flashes of what they could become when they broke their season high multiple times. This is why the small details are so important. The margins between a good team and a great team are slim, and it’s the reason they focused so much on the minutia. This performance is just their demonstration of blossoming from a potential top team to a contender.
“The last weekend we competed, on the bus ride home we talked about us being a little bit more intentional and truly looking at the details, because the only reason why we were losing or not getting the scores that we wanted were because of tiny things,” Townes said. “So, in the gym that next week, we really, really pushed. We were so intense. We were so intentional with our gymnastics … I think being that intentional during practice and then mentally all of us being in a strong, mental state and all of us being unified for each other … was what really made it happen altogether.”
Scott added their mindset wasn’t bad, as they just all needed to shift a little and get on the same page.
The gymnasts’ goal this season was to first win the Big Ten for the first time, win their region and then go deep at the NCAA Championships. If they can replicate their performance from last weekend, their goals will be attainable.
“I think this is a building block for the program,” Townes said. “This is definitely not where we stop … I think we have the capability to go 198 anytime, so I think now it’s kinda like, ‘this is what we can do.’
“This is what we continue to do, because even after the meet, there were still a couple of things that we talked about as a team and we were like, ‘We could have done better on that’ … I think this is just a moment for the world to be like, ‘Oh, Illinois is really like that’ … For us to be able to just have that moment was definitely a building block for us, ‘cause it only goes up from here.”