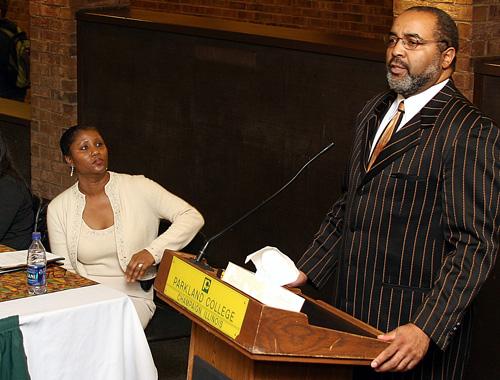 Although Jan. 19 marks the 23rd year that the nation has observed Dr. Martin Luther King Jr.’s birthday as a federal holiday, some think that this year is especially memorable because it falls just one day before the inauguration of the first black president.

But for Kent Redmon, professor of speech communications at Parkland College, is not worried that the holiday would be overshadowed by the historic inauguration on Tuesday. Redmon commemorates King by reenacting his famous speeches for audiences throughout the Champaign community.

Over the years he has spoken at public and private organizations, educational institutions, hospitals and even prisons. While he is noted for the variety of performances, King’s speeches appeal to him because their messages are motivational in nature and are still relevant today.

“Some pieces of his rhetoric were prophetic,” Redmond said. “He was able to win people over with influence as opposed to power.”

Redmon originally began his reenactments in preparation for oratorical declarations for his speech team, but has continued for the last 20 years because he enjoys spreading the message of peace.

“He’s the only person I know that does the rendition,” Gilbert said. “It’s very encouraging and reminds me that you can kill the dreamer but not the dream.”

Although Gilbert was only nine when King was killed, he was deeply moved by the power of his words and the strength of his message.

“It’s not ancient history,” he said. “We might still have a long way to go, but I’m a personal witness that we’ve come a long way.”

Gilbert honors King by sharing his ideals and beliefs with his children through books and movies.

“We have to share with the young people that it hasn’t always been like this,” he said.

When Gilbert was younger, he said he couldn’t go through the front door of the restaurant his mother worked at.

“If I wanted a hamburger, I went to the back and got it there,” he said.

Redmon added that the younger generations have not had to suffer and cannot appreciate everything King stood for.

“It’s a blessing in a way, but at the same time it might suggest we are losing a part of our history. We want to keep alive all of the things you have access to now that you might take for granted because they didn’t come free,” he said. “Somebody bled and died for that.”

For Kelly Gibbons, sophomore in Education, this year’s holiday means more to her than simply a day without classes.

“People have more to celebrate this year,” she said. “From here on out, this is a marking point and I think people will reflect on that.”

Redmon added that the election of President-elect Barack Obama is a central part of getting to the promised land that King spoke of.

“People will ask, ‘Has the dream been realized?’ Part of that answer is to look at the inauguration,” Redmon said.