Celebrating 50 years of education at sea 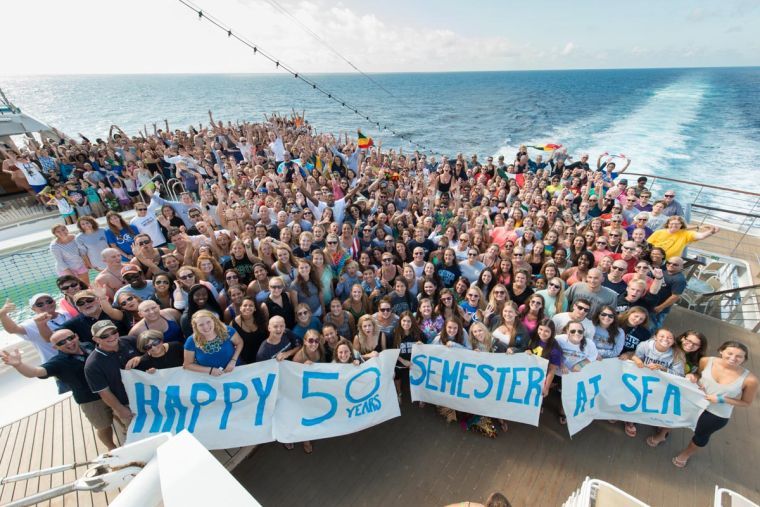 From learning art history in Saint Petersburg, Russia, to entering the media outlets of Cape Town, South Africa, the students, faculty and staff aboard the MV Explorer see the world while sailing down the Atlantic Ocean. With 20 to 25 disciplines incorporated into the curriculum, a 9,000-volume library, a student union and countless other amenities, Semester at Sea creates a study abroad program on a floating university.

Among those on board for the Atlantic Exploration 50th anniversary voyage is Eddie Diaz, 2001 University alumnus and dean of student life for the program.

Though Diaz never imagined himself working in student affairs as an undergraduate, he worked with the Illini Union Board as program manager of student activities and at the Leadership Center after graduating.

While working on his master’s degree in higher education administration at Loyola University Chicago, Diaz discovered Semester at Sea and decided to apply during his job search. He was hired as an associate dean for the fall 2009 voyage and instantly fell in love with the program. When asked to come aboard again this fall semester, Diaz was grateful for the opportunity.

“I think the beauty of this program is that you’re with so many different people,” Diaz said. “We have a tag line that says, ‘Our campus is the world.’ It’s not only on the ship, but from all over the world, depending on the voyage you do.”

For both Diaz and professor Jessica Roberts, the beauty of the program also lies in the ability for students to immediately apply the knowledge they learn aboard the ship when stopping at a port.

Each course contains required fieldwork that is worth 20 percent of a student’s grade. For the journalism history and ethics course Roberts teaches, her students spend a day in Cape Town, South Africa, visiting the Cape Times and Bush Radio and interacting with professional journalists.

“It’s like asking someone why they watch a movie,” Roberts said. “You could hear about the plot, you could find it on Wikipedia, but that’s not the same as watching it and getting to actually be there and experience it. You might have an idea in your head of what Morocco is like, but to live it is a whole new thing.”

Roberts words spoke true for Carl Hughes, an Oregon State University student who is aboard the ship.

“Since I’ve been on the trip, this has definitely been the craziest, coolest, best experience that I’ve had so far in college,” Hughes said. “I still have two more years after this, but I’ll be hard pressed to find anything that matches up to this.”

So far, Hughes’ favorite port was in Ghana, when he visited Kofi Opoku, a man who compiles medical research for all of the different plants growing in his rainforest. Hughes was inspired by Opoku’s commitment to sharing his knowledge with the students and his passion for doing what he loves.

In addition to the experiences the passengers have received on land, the ship itself allows for an interesting dynamic between students and faculty.

Outside of the classroom, Roberts also teaches a CrossFit fitness class and is able to interact with students on a different level as well.

“They see you as people more than just a sort of personality-less figure who shows up in class a couple times a week to spout information,” Roberts said. “It makes for a warmer environment. I really like my students and I know a lot of them in a way that it’s impossible to know your students in a traditional university.”

Every semester, the study abroad program hires new faculty and staff to keep the experience new and refreshing for all.

Once this voyage debarks in Fort Lauderdale, Fla. on Dec. 16, Roberts will start her teaching profession on land at Xi’an Jiaotong-Liverpool University in China. Hughes will continue his academic career at Oregon State University and Diaz will return back to Chicago. However, none of them is ready for it to end quite yet.

“I think one of the challenges is just appreciating everything because it happens so fast,” Roberts said.

Diaz said he wishes he knew about the program as an undergraduate and encourages University students to speak with the Study Abroad Office and to visit semesteratsea.org to learn more information.