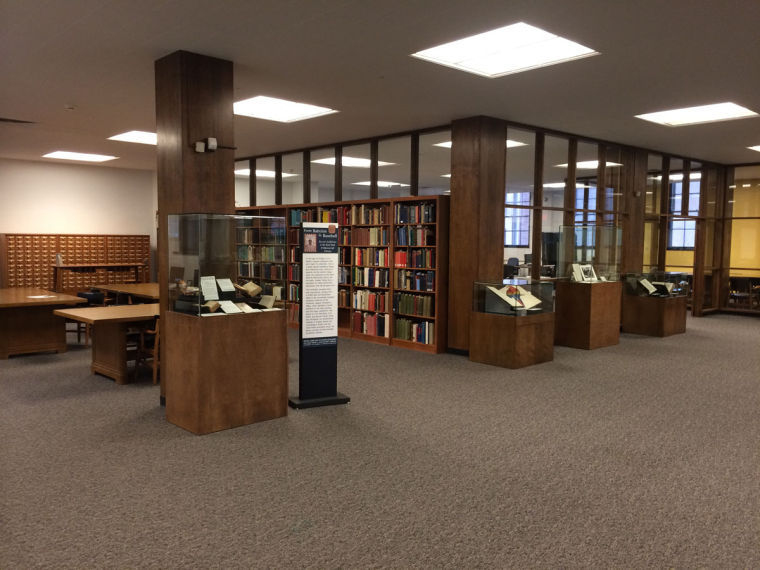 The University’s Rare Book and Manuscript Library, located in the Main Library, holds a variety of diverse collection of letters, manuscripts and illustration books for students to explore.

The third floor of the Main Library is dead quiet. And empty. But at the end of the hallway, there is a place filled with life and intrigue.

Inside, partitioned glass rooms with wood trim contain different scenes. In one room, people diligently type on computers near shelves of reference books, dated wood and gold card catalogues. In another, a student carefully thumbs through the pages of an aged book with a mahogany cover.

In the center of the room, display cases line the glass walls, containing the off-white and yellowed pages of letters, manuscripts and illustration books.

The end of the hallway isn’t a step into the past, it is the University of Illinois Rare Book and Manuscript Library.

Founded in 1936 with the personal collections of professors Harris Fletcher and Thomas Baldwin, the Rare Book and Manuscript Library contains almost half a million books and over three kilometers of manuscripts. The University Library has the third-largest collection in the country, after Harvard and Yale, and the largest public university library collection of “incunables,” or books printed before 1501, according to David Morris, a graduate assistant in library and information sciences.

There are works from nearly every subject and time period in history, including the medieval ages, Elizabethan and Stuart periods in England, economics and science. It also features papers of authors — like Marcel Proust, Ernest Hemingway and William Maxwell — a collection of miniature books, a fragment of the Guttenberg Bible and Shakespeare’s first folio.

For Marten Stromberg, a curator of rare books and manuscripts at the library, it is hard to pick one favorite selection.

“The best answer that I can give is that my favorite book is always the next new thing that I haven’t seen before,” Stromberg said. “I get to see new and interesting things on a daily basis.”

Stromberg does have some favorite collections, however, including the letters of poet Gwendolyn Brooks and the personal libraries of Carl Sandburg and H.G. Wells. He also likes the Meine collection, which includes works of 19th century American humor and wit, like those of Mark Twain.

Like Stromberg, Valerie Hotchkiss, the director of the library and professor of medieval studies, said she has a new favorite every month. She particularly enjoys a manuscript by a pirate under King James I, a dictionary of seafaring terms and sketches by Charles Dickens.

“The collections are really varied and world class,” Hotchkiss said.

Because of the high value and delicacy of the old books and manuscripts, they are stored in a vault. The vault consists of two floors and four quadrants, each containing different categories and collections, Stromberg said. He also explained that the vault is temperature and humidity controlled. Most of the vault is kept at 50 degrees Fahrenheit.

Stromberg said the library is not only open to the students, but to the public as well, from 8:30 a.m. to 5 p.m. Monday through Friday. Visitors must register and bring identification for security reasons, he said, and then are able to view the material.

The library has brought visitors from all across the country and world, including foreign dignitaries, Stromberg said. He explained that British researchers, for example, are drawn to the H.G. Wells collection.

In addition to helping visitors find books and manuscripts, the curators also coordinate exhibitions that showcase different eras and treasures of the library.

This semester’s exhibition, titled “Babylon to Baseball,” contains a miscellaneous variety of items, such as a Babylonian clay tablet circa 2050 B.C., baseball scoring guides, an illustration book of parrots and more, Stromberg said.

Beginning on May 30, a new exhibition will be unveiled called “Fire Burne and Cauldron Bubble.” Morris curated the exhibit, which will focus on works about witchcraft. He said the library has a wonderful selection of material on the subject, such as a 1496 edition of a handbook on hunting witches titled “The Hammer of Witches.”

“It is actually kind of sad to think about how many things are going to be left out of the exhibit, (because) you are trying to decide what people are going to find cool, what is important from a research standpoint and what can fit in the display cases,” Morris said.

“(The manuscripts) are vibrantly colored and painted in letters of gold so they are gorgeous to look at,” he said.

One manuscript that Morris has catalogued includes a book from the coronation of Charles IV in France in 1326. It contains gold letters that kept their luster through the years. However, he said people must not touch the letters because they will oxidize immediately. He also said he deals with Egyptian papyrus from the 3rd century B.C.

“It is thrilling to work with this stuff,” Morris said.

Both Morris and Stromberg encourage students to visit the library.

“The only way to see what is here and what is interesting is to spend time working with the collections,” Stromberg said. “Find something you are interested in, talk to a librarian and we are happy to work with you to teach you how to explore.”

Hotchkiss said that students should come to the library to do primary research, which she believes is the best kind of research.

“If you don’t have an idea, we have ideas to lead you to research that hasn’t been done before,” Hotchkiss said.

After all, in this extensive library, many of the books and manuscripts, filled with secrets of knowledge of the past, have been untouched by researchers. All one has to do is step inside.

Annabeth can be reached [email protected]