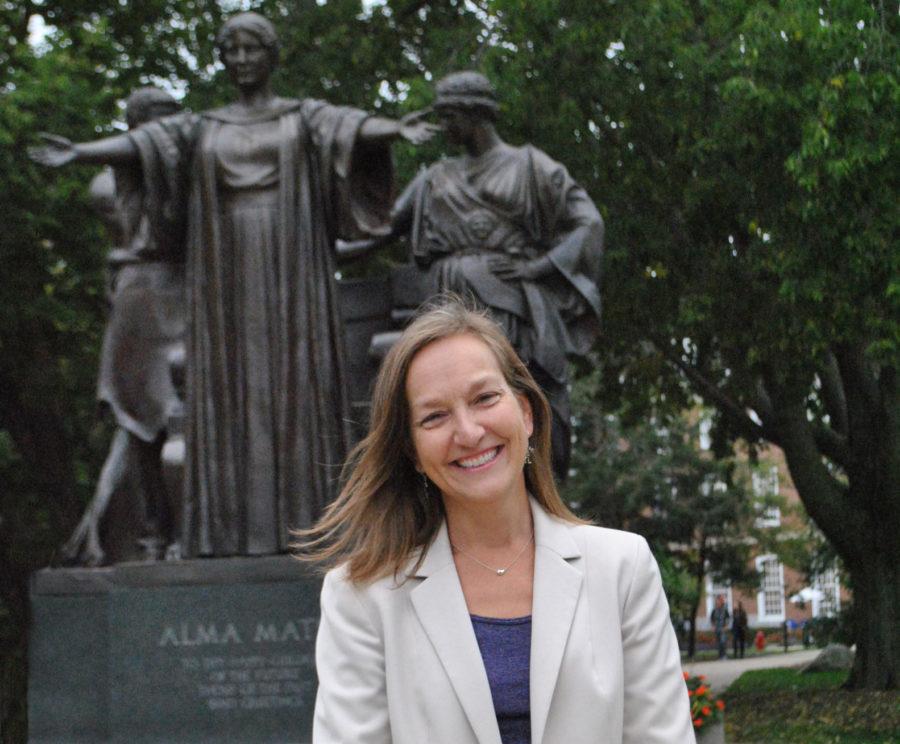 Associate Chancellor Robin Kaler stands in front of the Alma Mater. When Alma changes outfits, Kaler is the one who dresses her up.

Since her undergraduate days at the University, Robin Kaler has been a runner. What started with a tiny track at the Intramural Physical Education Building has led to 5Ks, 10Ks, half-marathons and even multiple marathons.

So this would be no different. It was a project.

In November 2002, Kaler’s mom finished her radiation treatment for breast cancer. That same day, at 41, Kaler, associate chancellor at the University, was diagnosed with breast cancer.

“You think, ‘I’m gonna die,’ because somebody says you have cancer, that’s kind of what you think,” Kaler said. “They talk about how now it’s so treatable and everything and it’s not necessarily the worst thing in the world to happen, but when it happens to you, it’s pretty overwhelming.”

Kaler came home that evening and discussed the situation further with her husband, who was undergoing chemotherapy at the time for his own health challenges.

“He had such a really good attitude himself, that the next day I thought, ‘Oh, for gosh sakes, if this is the worst thing that happens to me, I need to tough it out,’” she said.

From then on, breast cancer became Kaler’s project.

She scheduled an appointment to see a good surgeon at Northwestern Memorial Hospital in Chicago, and since her husband wasn’t feeling well from the chemo, she brought several friends with her. There were a total of seven of them when the doctor walked into the patient room, and one of her friends even carried a recorder with her. But to Kaler’s surprise, the doctor didn’t tell her to put the recorder away and thought it was a great way to allow her husband to hear the appointment later. At that moment, Kaler decided she could trust her life with this doctor.

In December, Kaler had a lumpectomy, a surgery removing only the tumor and some other tissue, at Northwestern. She then underwent radiation treatment from late February to early April at Carle Foundation Hospital.

Every morning, Kaler woke up, went on a run, got her two daughters, Emily and Zoe, ready for school, ran to her radiation treatment around 7 a.m. and then went to work. She wasn’t late once and only took two days off when she had the surgery.

“When she was undergoing the cancer treatments, we knew it was happening, but she was still doing everything she had to to get her job done,” said Jeff Unger, former director of the Illinois News Bureau at the University. “She wasn’t about to shirk her responsibilities.”

At her radiation treatment, Kaler would see a lot of people who had already given up or let the illness dictate their lives.

Kaler chose the former spirit, and she trained and qualified for the Boston Marathon during her treatment. Just a few months after treatment, she ran a 3-hour-and-51-minute marathon.

“I feel like when you’re young, things that are a little bit scary can seem a lot scarier, and I never felt scared or anything like that at all,” said Zoe Kaler, Robin’s oldest daughter and junior in Media. “I didn’t even realize that she had it until I was older. I guess I didn’t really realize what it meant, and I’m sure part of that was because of how strong she was.”

In 2004, Kaler ran the Boston Marathon. It wasn’t anywhere near her fastest time, but it was her way of knowing she made it. All through the race, Kaler heard people cheering for someone named, “Smiley,” and she couldn’t figure out who they were yelling at. It wasn’t until she was in a spot completely by herself and she heard someone shout, “Go Smiley,” when she realized they were looking at her.

After the radiation, Kaler traveled to Chicago on a monthly basis so her doctor could administer a shot to her ovaries. Because Kaler was estrogen receptor positive, reducing the amount of estrogen in her body helped block the cancer cells from growing again.

Eventually, Kaler grew tired of the shots, so she asked her doctor to remove her ovaries. She also wanted to rid herself of anything that could be a potential cancer-causer in the future, so she had a complete hysterectomy.

For about five years, Kaler took Tamoxifen, a drug commonly used to prevent breast cancer in both women and men. Since the surgery, her cancer hasn’t come back.

Yet, Kaler isn’t the only survivor in her family. Her sister had lymphoma a couple of years ago, her mom has had breast cancer twice, and her dad had a stroke a couple of months ago. Through it all, the family just figures out what they have to do to keep moving, Kaler said.

So much so that both Zoe and Unger, her co-worker of 20 years, tend to forget she was ever diagnosed with the disease.

“It’s not a death sentence. It’s a new path. It’s just a new path that you need to take,” Kaler said. “You thought you were going down this path, but you can get where you’re wanting to go down another path. Or maybe you’ll get somewhere better, somewhere different, and that’s okay. Just don’t fight it. Just do it.”