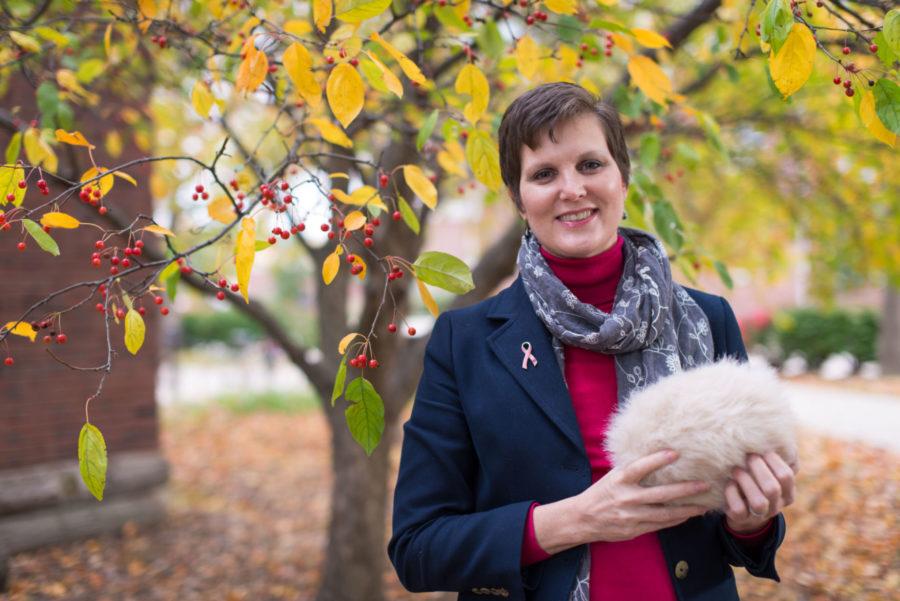 Anna Mehl has always been a fan of “Star Trek.” In particular, the fictional alien animal on the show — Tribbles.

Tribbles are fluffy, ball-shaped animals that are first seen in the episode “Trouble with Tribbles.”

In the show, the animal is born pregnant and is widely considered harmless until it continues to produce en masse.

Similar to Tribbles, they told Anna that the risk was minimal, that it wouldn’t be coming back.

But when Anna put on her swimsuit in the summer of 2013, she couldn’t believe what she felt under her left arm.

It was a tumor, and she knew all too well what that meant — a third bout with breast cancer.

It was her own form of Tribbles.

“I didn’t even feel like I deserved to wear a pink ribbon or call myself a survivor after the first incident,” said Anna, lead program coordinator for the Center for Innovation in Teaching and Learning at the University. “But if you don’t nail those Tribbles the first time, and they come back, they’ll get you. You can die if you don’t get them under control, and that is the thing about breast cancer, if it’s not caught early and treated correctly. We talk a lot about breast cancer, and we do a lot of things. But what people don’t know is that it’s not boobs that are at risk. It’s women’s lives. It will kill you.”

It was 2005 when the then 37-year-old and mother of one was first diagnosed with breast cancer. Anna, now 47, said she always feared that breast cancer would be a part of her life because her grandmother passed away from the same disease at the age of 39.

Her daughter, Dara, was only 18 months old at the time, and even though the cancer was Stage 0, she still wanted to fight the disease right away.

Anna went on to seek treatment at Carle Foundation Hospital, where she would have a lumpectomy and radiation treatments.

Following her treatments, Anna was deemed “disease-free” and said her doctors determined the likelihood of reoccurrence to be low, but they would maintain caution.

Then in 2009, Anna and her family were hit with her second diagnosis of breast cancer.

It occurred in the same spot as the first. But this time Anna wanted to move past her diagnosis, so she went on to get a bilateral mastectomy.

“We just decided it just wasn’t worth the risk,” Anna said. “So I didn’t want to have to deal with going to the doctor and surveilling that tissue, I just wanted it gone — I just wanted to live my life.”

It was during her second experience with breast cancer that Anna said she began to feel the impact of others’ support.

Along with other breast cancer survivors, Anna became heavily involved with the Young Survival Coalition’s local chapter. While Anna said the group is no longer active, it provided her an opportunity to learn mo=re about breast cancer and know what to expect. She also joined the Sinai Temple in Champaign before her second diagnosis, which she said provided her a community of faith.

But quickly after her bilateral mastectomy, Anna’s support was needed more than ever.

On July 9, 2013, Anna learned that she was facing a third breast cancer diagnosis.

A bilateral mastectomy can prevent risk of breast cancer occurring by nearly 90 percent in women who have a strong family history of breast cancer, according to the National Cancer Institute; however, Anna found herself in a rare situation.

Her doctors classified her as “not a textbook case,” she said.

But even though she had already been through two separate breast cancer experiences, this time was different for Anna.

This time the cancer was invasive.

She said she was immediately fast-tracked at Carle, and she would eventually seek further treatments at Barnes-Jewish Hospital in St. Louis.

“I had told my doctor, ‘I want the absolute, most-aggressive treatment plan. I don’t care what you have to do; I will suffer. I will do whatever you tell me to do,’” Anna said. “I wanted to do the most aggressive thing, so after much consideration, it came back that the best way to proceed was chemo.”

Anna’s chemotherapy treatments were then followed by radiation treatments.

“I was close to a lot of people at the Lodge and helped a number of them,” she said.

After six weeks at Hope Lodge, Anna was “disease-free.” For Anna’s husband, Mark Althouse, program coordinator in ACES, Anna’s three bouts with cancer all held something different; however, Anna always continued to fight through them.

“She was very, very resilient and really tough, especially the third time through,” Mark said.

Both Althouse and Dara were a part of the stability that permitted Anna to continue through her battle and all three diagnoses and treatments.

“He is such a rock,” Anna said of her husband’s support. “In some ways, cancer diagnoses can be harder on the partner than it can be on the actual person because I am actually doing something. I am going in and getting treatment, but you know, he has to stand there and wait to hear what happens next.”

Her daughter is now 11 years old, and she is her 11th year of marriage to Althouse, but cancer is still a prevalent part of Anna’s life.

“For me, this is not over. I won’t ever close the book on breast cancer. I’m ready,” Anna said. “Because it can come back, and if it does I’m ready.”