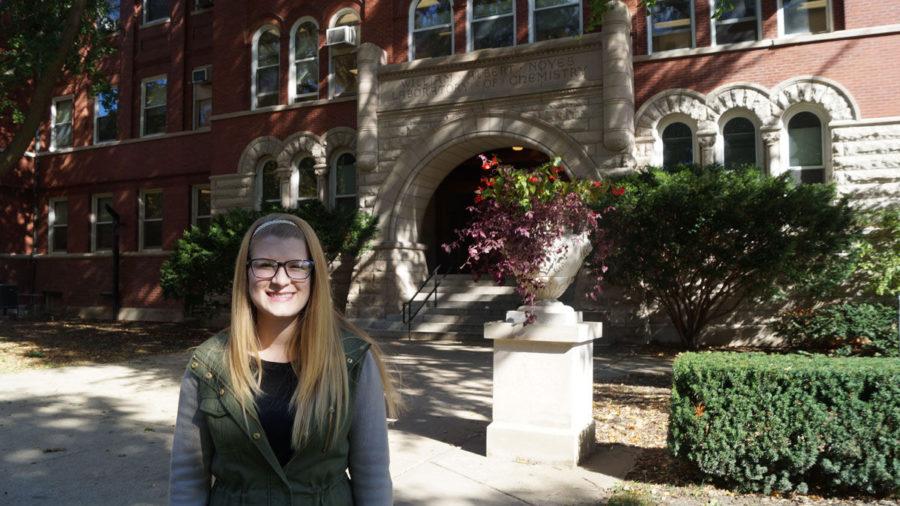 While the start of a new school year can mean sharpened pencils and fresh crayons for many students, it means visits from the University’s Reaching and Educating America’s Chemists of Tomorrow (REACT) Outreach program for local third graders.

What started as an event during National Chemistry week in 1993 to get the University’s American Chemical Society chapter out to schools has became something much bigger, said Jesse Miller, REACT director. That event continued for several years before the idea was suggested to allow students to participate in the activities for James Scholar Honors Credit.

Eventually, the popularity of the event led to it becoming its own program for 100-level chemistry courses, bringing with it an influx of volunteers; it went from 40 students to 400 volunteers, according to Miller.

To organize the program, the class 199K was created, which allows the staff to create and improve curricula, schedule classroom visits, train volunteers and work with the students.

Now, REACT is a program that allows students in certain chemistry classes to fulfill James Scholar Honor credit or volunteer by visiting the schools within a 30-mile radius of campus. University students do everyday chemistry activities with the students there, as well as participate in demonstration shows at Don Moyer Boys and Girls Club, Montessori schools in Champaign and third-, fourth- and fifth-grade classrooms.

The program focuses mainly on volunteering in third-grade classrooms, though in recent years it has branched out to other grades, events at the Orpheum Children’s Science Museum and CHEM Family Nights. For president Sophie Friedman, junior in Engineering, she finds that the third and fourth graders aren’t the only ones who gain an advantage from the program.

“It’s beneficial to (the kids) and to (the students), too, because you get to see a bunch of little kids, you get them excited about chemistry and share your knowledge, too,” Friedman said. “So you kind of get a dual relationship for that short hour of time that you can make these kids have fun with science for a day.”

One constant throughout REACT’s history has been its third-grade program. Dubbing it the “bread and butter,” Miller notes that third grade is not only the best time to reach out to kids because they’re not yet busy with band or sports, but also because they’re just beginning to understand the science involved in the demonstrations.

In some areas, elementary students anticipate REACT’s arrival when they enter third grade.

“The kids do look forward to it. Especially in places like Mahomet, places we’ve been going to for a while, they expect it,” Miller said. “When they get to third grade, they know it’s the Physics Van and REACT that are coming.”

Emilee Nawa, sophomore in LAS, is one of the people who helps in coordinating the long-awaited visits to the third grade.

As the coordinator for one of the biggest programs that REACT offers, Nawa is in charge of emailing local schools to see if teachers are interested in having the students visit, letting them know what visits will be happening that semester, sending them lesson plans and scheduling classroom visits around teachers’ schedules.

“We’re pretty flexible with getting involved, making it so that it works with everyone’s schedules, making sure that it makes everyone happy,” Nawa said. “Because we don’t like disappointing — especially the third graders, cause they love having us, and it’s like an expectation now.”

Nawa began as a volunteer during spring semester last year for James Scholar Honors credit, and then discovered she enjoyed working with the children.

During a family night event last semester, Nawa did a demonstration that involved running electricity though a pickle to make it glow. This intrigued one of the children so much that they kept coming back to Nawa’s table each time the experiment ran, asking her to explain it. A little girl’s curiosity about science was what made Nawa want to continue with the program in the fall as a board member.

“She was very enthusiastic, and that was one of the reasons I liked REACT a lot, because of kids like her. We get to teach them something and they get really intrigued by it,” Nawa said. “It’s probably something she went home and was like, ‘Mom, Dad, this is so cool. Look what I did today. I learned something today, do you want to know what I did?’ I think it’s awesome.”

All in all, participating in REACT has taught Nawa a lot about herself, even about potential career paths. While before she only saw herself becoming a physician’s assistant, she is now also considering teaching.

“I really didn’t think about teaching before this semester. I like being with children and that whole ‘light bulb thing’ is kind of really cool. I like teaching them science, because it’s something that’s abstract and they don’t usually learn something weird like that,” Nawa said.

To Miller, though, it doesn’t matter whether or not the students experience that light bulb moment.

“This is my personal philosophy: It’s not that important to me that the kids learn anything when we go out there. I know that seems kind of goofy. It’s not that I don’t want them to learn anything, but that’s nothing, that’s not the raison d’être,” Miller said. “It’s that they have fun and see that science can be fun and interesting and it’s not just a bunch of pointy-headed guys in lab coats working at Monsanto trying to take over the world.”

Susan can be reached at [email protected]