From sadism to social commentary: “Venus in Fur” has it all 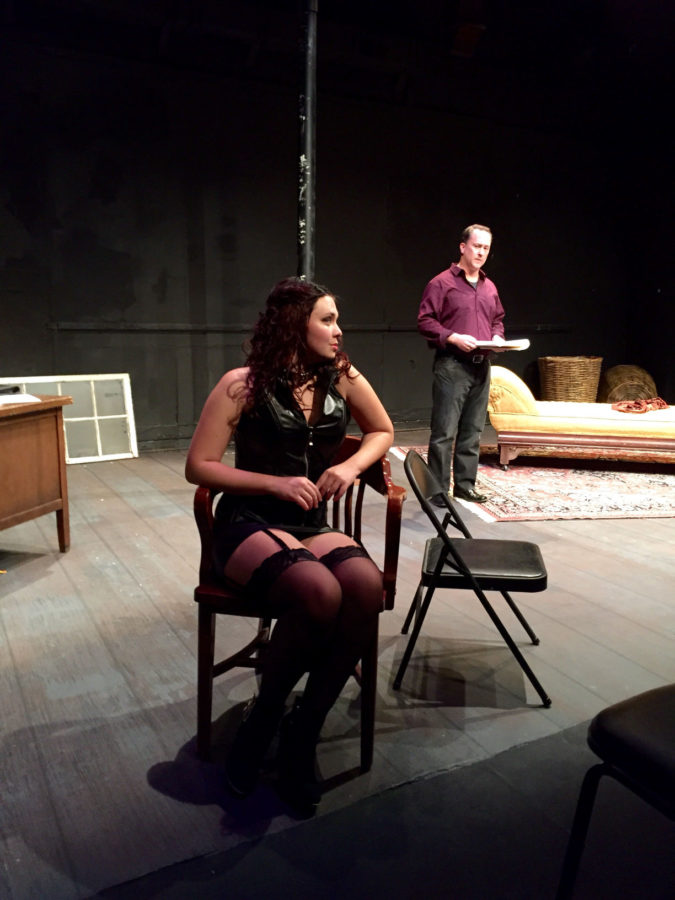 Laura Anne Welle and Thom Miller star in “Venus in Fur,” a play running from today to Nov. 15 at the Station Theatre.

The novel, “Venus in Furs,” was adapted into a stage production by David Ives in 2010. The Power Play follows a successful playwright and struggling actress during a tumultuous audition filled with sexual tension, sadism and plenty of comedy.

“Venus in Fur” is the second show in the Station Theatre’s season. The theater is located in downtown Urbana.

The play, though focused on sexual themes, has a taste of everything.

“It’s a fun, sexy kind of role and then kind of dark also. You get to flirt and you get to get angry; all the fun stuff actors want to do,” said Thom Miller, who plays Thomas Novachek in the show. Novachek is a writer-director struggling to cast the female lead for his show.

Laura Anne Welle is performing in her fourth show at the Station. She plays Vanda, a crass actress struggling to be cast.

“Vanda struck me right away as someone I loved,” she said. “I definitely came in to here going, ‘I really want this part.’?”

Despite never working together before, the actors have developed a repertoire on stage, according to Gary Ambler, director of the play.

“The hard thing is, it’s only two of us,” Miller said. “I never leave the stage and she never leaves the stage once she gets on.”

This is also the first two-person show for both actors.

“The tension and the way this comes to a crescendo happens more because it is just two people and him and I, the energy that we build, can build to a kind of ridiculous level,” she said.

For Ambler, working with two actors is fun and simpler because he focuses on fewer cast members.

“It’s about kind of keeping the tensions even or making them strangely dissonant, when things agree, when things don’t agree,” he said.

The actors brought in an additional element that Welle called an “accidental happiness”: Miller is twice as old as Welle. The significant age gap works well for the show, according to Welle.

“That’s a lot of where this kind of power dynamic comes from. In the play, he’s a white, older, straight guy,” she said. “He starts with all the power. He’s the one with the reputation, and all of the prestige and she kind of flips that on its head.”

According to Ambler, the plot was familiar to some. During auditions, it was often compared to “50 Shades of Grey.”

For Ambler, the power dynamics in the play are realistic: “There’s nothing more power-rich than that relationship between a director and an actor and how that gets flipped is so interesting.”

The idea of “flipping” is constant throughout the show. Not only are traditional gender roles reversed, the actors alternate between characters. In the play-within-a-play, Thomas goes from being a director to an accented actor. Vanda loses her uncouth mannerisms and becomes a whole different person, Welle said.

Intimacy is key to the show, with a simple set and small cast.

“It’s interesting because this space is kind of great for that kind of intimacy, always, and you can work more subtly,” Ambler said.

Welle also stressed that the show is comedic at heart.

“It’s going to be just the right amount of sexy and scary and funny, and I think a lot of sexy shows are kind of dark or almost triggering or unpleasant for people to go through,” she said. Despite going through the show in very little clothing, “It’s too fun for me to find any part of it upsetting,” she said.