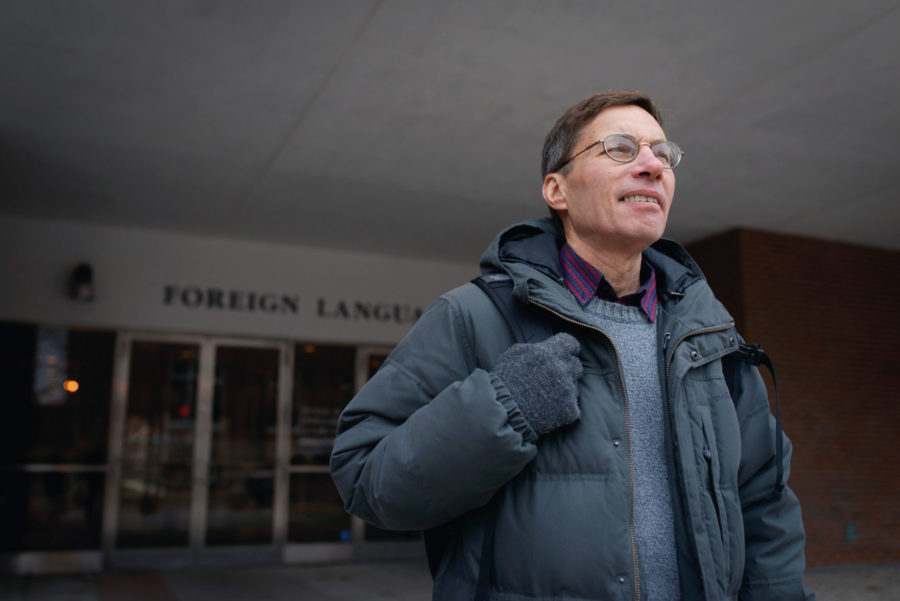 At 63 years old, Michael Chrzastowski was much different from the other graduate students last fall.

After working as a University employee for 25 years at the Illinois State Geological Survey, Chrzastowski graduated on Dec. 20 with a master’s degree in religion with a focus on Islam, achieving a degree that was 10 years in the making.

The educational milestone was not his first. With his new master’s in religion, Chrzastowski now has five collegiate degrees from major universities across the country, but the newest addition marks a dramatic shift in Chrzastowski’s professional arc; after four degrees in the sciences, his fifth is the first in the humanities.

But in 1986, Chrzastowski was sure his formal education was finished.

He started in Seattle at the University of Washington where he would work toward two bachelor’s degrees, one in geology and one in oceanography. Eight years after graduating with the two degrees, he received a master’s degree in geology in 1982 from Western Washington University and in 1986, a Ph.D. in coastal geology from University of Delaware. And after one year of working as a geology visiting professor at Delaware, he began working as a coastal geologist at the Illinois State Geological Survey in 1987.

“I’d never imagine that then I would also go … back to school and start all over again,” he said. “My earlier education was pursuing a very ingrained interest, and pursuing science is something that I had from youth.”

But Chrzastowski’s education path would begin once again in 2004, when he enrolled in courses at Parkland College.

“When my retirement was already on the horizon, I started considering what were the possibilities of what I wanted to do after retirement. I could have just continued doing geologic work as a consultant, but I thought I would look at other possibilities,” he said.

After taking courses in business management and computer mapping, he enrolled in his first religion course at Parkland, which would turn into two courses, and after transferring to the University in the spring of 2005 with a full tuition waiver under University employment, he decided to continue a formal education in the religion department.

“I came up with the goal of, in my post-retirement, to be a religion teacher,” he said.

Even though religion wasn’t a huge part of Chrzastowski’s life, he said he understood the vitality of a belief system in society especially as he grew with age.

“It is something that matured with time, and it is maybe something to do with getting older, where you start to think more about life and death,” he said. “But earlier in my life it was not, it was marginal.”

While still working at the Illinois State Geological Survey, which is a branch of the Prairie Research Institute, Chrzastowski was taking one religion class a semester to work toward a degree for his post-retirement career.

Even having to switch his work schedule around to fit in class, Chrzastowski often skipped lunch breaks and worked into the evening to make up for his class time.

Despite still considering himself a scientist, Chrzastowski is now looking to teach religion to fellow Christians, particularly about Islam beliefs, and the overall importance of religion.

“Religion is not science, and science is not religion,” Michael Chrzastowski said concisely.  “What you have to do is learn how to compartmentalize them. When you try to mesh them is where things can become difficult and problematic. But they’re separate.”

After eight years of taking undergraduate courses, Chrzastowski was retiring, and the University was accepting applications for the first class of graduate students in religion. Due to his part-time schedule, Chrzastowski said that his graduation was delayed a semester after the other four members of the first five finished their studies.

Chrzastowski applied for the masters program and was accepted as one of the first five students.

At the beginning of his second path of education, it was with the help of professors and faculty such as Valerie Hoffman, professor of Islamic studies and director for the Center for South Asian and Middle Eastern Studies, that Chrzastowski was able to continue to take religion courses at the University, despite being classified as a non-degree student.

Hoffman was one of Chrzastowski’s first professors at the University and said that Chrzastowski was a leader in the classroom and admired his return to college.

To see Chrzastowski and his fellow members of the initial class graduate has been a great honor to see for members of the religion department, both Hoffman and David Price, professor and chairman, respectively.

Both Hoffman and Price said the program initially took quite a bit of work to get off the ground; however, looking back it has been a “meaningful experience,” Price said.

Price said that the program is the only graduate religion studies program at a public school in Illinois and said that with the help of Chrzastowski and his peers, the program’s students have continued to find success since it began no matter what their focus.

Chrzastowski said he knew his focus would pertain to Islam, as each graduate student must have a specific religion as a focus area, because of the relation between Christianity and Islam.

“I was very surprised at what I learned and what became aware to me what information I had was misinformation, or in many cases was just wrong,” he said. “That’s why I became interested in teaching more of that to other Christians.”

Through the development of the University’s religion department, Chrzastowski said his principal goal now that he has achieved his fifth college degree is to teach at a Christian school at the collegiate level, “that understands the importance of its students getting a basic understanding in Islam, which is the second largest religion in the world,” he said.

For Chrzastowski, the importance of religion continues to impact daily life, whether one is especially devout to a religion or not.

“Religion is a factor that influences world events,” he said. “If we want to understand what’s going on elsewhere in the world, we need to understand the backstory to a lot of events, which are people making decisions and taking certain actions based on religious beliefs. Understanding that better… helps us understand our world better.”

Now, more than 40 years after receiving his first bachelor’s degrees from the University of Washington in 1974, Chrzastowski said education continues to impact his life.

“There’s no age limit to education. I’m an example that there is also no limitation, there’s no real sense of a terminal degree,” he said. “It’s the most beneficial thing a person can do for themselves and that hasn’t changed at all.”

Declan can be reached at [email protected].