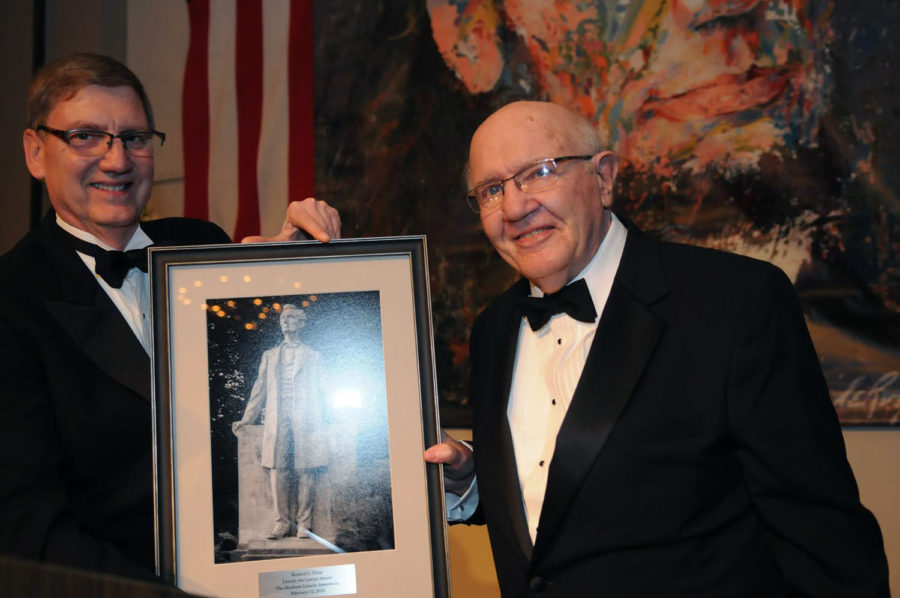 Richard Thies, a lawyer from Urbana, accepts the “Lincoln the Lawyer” Award by The Abraham Lincoln Association on Feb. 12.

When Richard Thies, 83, was admitted to the Illinois State Bar Association to practice law in 1955, he took the oath at the Centennial across from the Supreme Court building in Springfield. Looking out at the city where Abraham Lincoln once practiced law, Thies remembered feeling excited that he could now practice in the same courtrooms that Lincoln did.

Nearly 60 years later, he would win an award that would equate his career with Lincoln’s.

On Feb. 12, Thies, an Urbana lawyer at the firm Webber & Thies, P.C., was awarded the prestigious “Lincoln the Lawyer” Award by The Abraham Lincoln Association. The award was presented in Springfield during the organization’s annual Lincoln’s Birthday Banquet, an event that has seen notable guests like President Barack Obama in 2009.

Thies is only the 11th person to receive the honor from the association, which looks for people who have carried similar values of Lincoln in their careers. Other recipients of the award have been judges, legal scholars and governors.

Steven Beckett was on the committee that chose Thies as the award’s recipient. Beckett, who is also an Urbana lawyer and lecturer at the University’s College of Law, said he has known of Thies since growing up in Urbana. He said they officially met when he was in law school at the University in 1972 and have known each for more than 40 years.

“Don’t you think that the people we respect the most lead by example? It isn’t so much what it is that they have to say, but we see how they live their lives and we see what they do for other people and the community and by seeing and observing them, we sort of go, ‘Wow, that’s the way I want to be,’?” Beckett said. “Dick Thies is that kind of guy and that’s why the award is so meaningful.”

When Thies’ name was mentioned to the other lawyers during a committee meeting, he said their reaction of approval was instantaneous.

When Thies received the phone call that he won the award, he said he was speechless.

“To try to express how you feel when anyone says that you have some of the qualities of Abraham Lincoln is just mind-boggling,” he said. “In fact, it still is.”

But when looking at all of the community service that Thies has done in C-U, it’s not surprising he won the award, said his son John Thies. John and his brother David are both lawyers at their father’s firm.

Thies’ activities include being a member and former president of the Kiwanis Club of Champaign-Urbana and Urbana Association of Commerce, a chairman of the Citizens Advisory Board of the Urbana School Board and Salvation Army Advisory Board, among others.

John said he was delighted when he heard his father won the award. He felt Thies had earned it after all of the accomplishments in his career.

“As lawyers, you’re in a position within the community that is held in such respect,” John said. “There is a real opportunity to make a significant difference around you.”

Thies said he believes practicing law and community service go hand in hand and would advise every young lawyer to get involved in their community.

“It’s a great way to get exposure … and to see what your values are,” Thies said.

Thies said young lawyers today might overlook community service because the profession is more complex. He said lawyers now have to specialize their practice, but in the last 60 years, he was able to work on a variety of cases such as airplane crashes, libel and slander at newspapers, personal injury, environmental law and international negotiations.

Born in Scottsbluff, Neb., in 1931, Thies said he never thought about becoming a lawyer until he came to the University as a history major.

“My family didn’t have a lawyer, didn’t know anything about lawyers, didn’t get in trouble where they needed a lawyer,” he said. “It’s a profession that allows you to serve other people. That’s your primary function — helping people solve problems.”

After receiving his undergraduate degree, Thies continued at the University and studied law. Then he served on active duty in the Judge Advocate General’s Department of the U.S. Air Force for two years and taught a law class at the University.

He said he decided to stay in Urbana when he met his wife Marilyn, local resident and University alumna. Thies said that the C-U community is a wonderful place to raise a family and practice law.

Along with his wife and two sons, Thies has three daughters, 16 grandchildren and two great-grandchildren.

But despite his large family, Thies still loves the opportunity to meet new people, and at the end of a case, being able to say he had a satisfied client that he really helped.

“When you are starting out, it’s sure nice when that first client comes through the door. That was a great experience to think that somebody (was) going to come see me,” he said.

Along with all of Thies’ community service accomplishments, Thies has been a leader in many law associations.

With so many honors, Thies said he recently found a box full of about 30 plaques while cleaning out his house to move to a retirement village with his wife.

For now, Thies will continue working beside his newest and favorite award in his office, which is located inside Urbana’s Lincoln Square building.