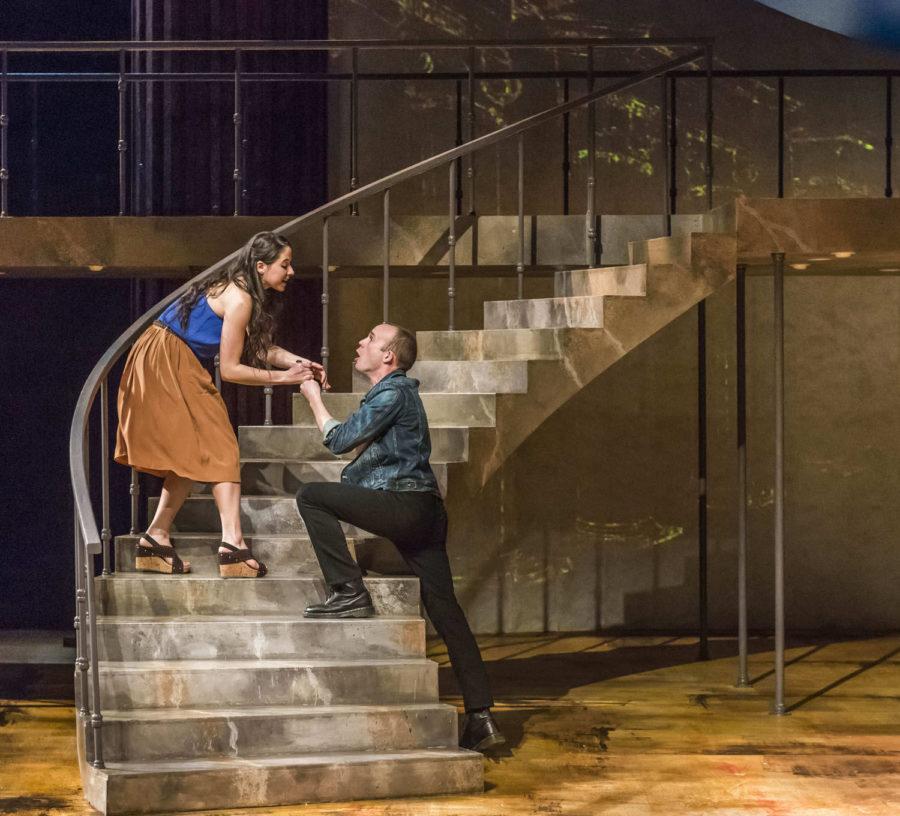 David Monahan (Giovanni) and Clara Byczkowski (Annabella) pratice during a rehearsal of “‘Tis a Pity She’s A Whore” in the Colwell Playhouse at the Krannert Center in Urbana on Monday. The play is directed by William Brown.

While Illinois Theatre’s latest production, “‘Tis Pity She’s a Whore,” is advertised with a mature-content warning, the show contains much more than language and nudity.

“There’s nothing extra added on for shock value,” said Sally Rae Hamer, senior in FAA, who plays Isabella, a college girl turned assassin, in the play. “It’s just portraying the story of real people, this is really happening to them. In real life, there is language and nudity and blood.”

The show, directed by William Brown, will be performed at the Colwell Playhouse from Thursday to Saturday and March 12 to 14 as the theatre’s fourth show of the season.

“I just think it’s a play that you don’t have an opportunity to see very often, or do, and we all feel so lucky to have this opportunity,” said Brown, a resident director for the Writers’ Theatre based in Chicago.

When the play, originally written by John Ford, premiered in the 1600s, it was banned in several countries and wasn’t performed until the 20th century.

In the first scene, the protagonist, Giovanni, confesses his love for his sister, Annabella, to his friar. The plot doesn’t get less provocative from there, but Brown said the issue is then “on the table,” and the play becomes romantic.

“It lulls you into thinking it’s ‘Romeo and Juliet,’” he said. “John Ford makes no decision about the rightness or the wrongness of their love, but he does give them a love story that is powerful and seductive.”

Like William Shakespeare’s infamous play, the show is a revenge tragedy, with so much backstabbing and bloodshed that cast members have compared it to “Game of Thrones,” Brown said.

While the plot is Shakespearean, in the decades between Shakespeare and Ford, key differences arose in the style of theatre including a move indoors, and a general loss of loftiness and grandeur, instead favoring domesticity and masculinity, according to Brown.

“The language is so modern. People are going to think we made it up, but it’s exactly what he wrote,” he said. “It’s easy to speak, it’s easy to understand. I find it quite accessible, and I think an audience will too.”

Brown adapted the script to be set in modern day Parma, Italy. The changes to the script itself are minimal, with most of them relating to anachronisms, he said. For example, the characters have modern costumes and use cell phones and guns.

“Theatre isn’t a dusty museum framing work as it originally appeared,” wrote Jeffrey Eric Jenkins, producer for the Illinois Theatre and head of the department of theatre, in an email. “This play is very theatrical, very intense and any shifting of period can only enhance its impact today.”

The shift to modern day makes the play more relatable, because the audience is not separated from the action by not relating to the setting, according to Hamer.

“It’s like all of these normal people who get thrown into this extreme, extreme circumstance which is, I think, what makes it so exciting,” she said.

Each of the parts play a vital role in the plot, and it is written so each character is flawed and contradictory, to an extent that there are no clear heroes or villains, Brown said. The complexity of the show and its characters makes it an acting challenge, but Brown said the actors have been astonishing.

Hamer credited Brown’s direction for allowing her and other members of the ensemble to develop their characters.

“We’re very focused on the show and committed to making it the best we can,” Hamer said.

Brown has never directed a show at the University, but he said he feels like an alumnus because he has worked with so many students over the past 20 years.

“I’ve probably hired a couple dozen people who actually went to this school through the years and I love them,” he said. “So something is happening here that’s right.”

Brown’s work with past students was one of the benefits to hiring him, according to Jenkins.

“Bill Brown is one of the most respected directors of classic work in this country,” he wrote. “It seemed like a good fit — and it is.”

The set design has also been impressive, according to Brown. The show features an elaborate, multi-floor set which relies more on audience imagination rather than multiple set changes, he said.

When considering the technical aspects and complex revenge plots, the controversial content is not meant to be a focus, according to Jenkins.

“It is impossible to guess how the play will be received, which is part of the excitement of doing it,” he wrote. “In our current world of social media saturation, ‘Tis Pity’ doesn’t strike me as especially controversial — there have been film and television versions of the play — but I imagine it will keep the attention of our young audiences.”

Hamer said one of the goals of the actors was for the audience to see Giovanni and Annabella as lovers rather than brother and sister.

“I feel like people are going to come away from it going ‘Oh my god, that play was about incest,’ but it’s about so much more,” she said.

Brown also said that while the effect of the play is powerful, love is still the main focus.

“One conclusion we’ve come to in two months of rehearsal is: ‘all revenge begins with love,’ or at least in this play,” he said. “At the bottom of all the revenge in this play, someone loves somebody.”