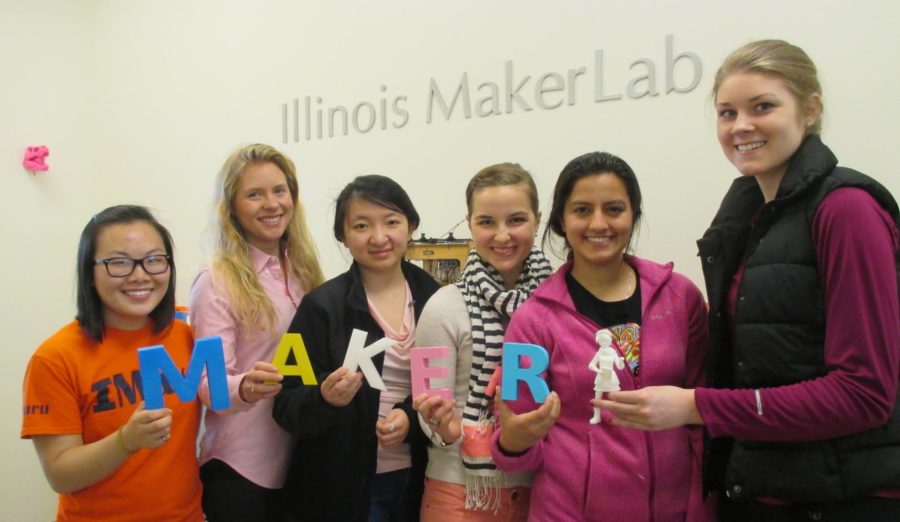 Last November, during a pilot session, a group of Champaign-Urbana girls ages 7 to ten gathered in BIF and were asked what they wanted to do when they grew up. Instead of the typical response of being an actress, singer or something involved with fashion, they were excited to learn about careers in the science, technology, engineering and math (STEM) fields.

MakerGirl is a project created by University students, whose mission is to inspire young girls to have a career within the STEM fields by educating them about the careers through activities and group based discussions and lectures. The project has only had one session, but plans to have three more sessions within the next few months.

“There is definitely a huge lack of women in science, technology, engineering, and math,” said Julia Haried, one of the co-founders of MakerGirl and senior in Business. “Personally, being a woman, I think that it is something to pay more attention to, and I’m interested in combating that and creating diversity there.”

Inspiration for the project stemmed from SOCW 321, a social entrepreneurship and social change class. The class was separated into two modules: In the first module, students were asked to think about their identity, and in the second module, students reflected on things they would like to change in society, said Elizabeth Engele, the second co-founder of MakerGirl and senior in Business. Realizing that some leadership positions within the STEM fields lack female representation inspired Engele to create MakerGirl.

“I just thought about how girls our age are focused on the wrong things that are taking away their energy from their careers and causes that they are passionate about,” Engele explained. “I wanted to develop a program that inspired girls our age to focus on their careers, but then I shifted the focus towards younger girls since that’s where the problem starts.”

Both Haried and Sophie Li, the third co-founder of MakerGirl and senior in Business, liked Enegle’s idea and joined her in the efforts to make it happen.

“From my perspective, a lot of young girls when they grow up are exposed to a lot of stereotypical girl values, and I think it is not fair to not educate them in other interests,” Li said.

During the pilot session, the participants were given the opportunity to create bracelets from a series of templates using the 3D printer. This was used as a time to expose the girls to new technology, but more importantly, demonstrate how enjoyable the STEM fields can be, Haried said.

Afterwards, the girls were informed about various influential women within the STEM fields. By recruiting various women engineers on campus to speak during the sessions, MakerGirl hopes to empower its participants and allow them to develop a new passion.

“On campus it is a unique opportunity for women in STEM that are our age to really use their knowledge to inspire younger girls and develop sort of a mentorship with them,” Enegle said.

With the University’s strong STEM-oriented education system, Haried believes that this campus is the perfect place to invest in a program like MakerGirl.

“Since our campus has one of the best engineering schools in the nation, it definitely directly benefits us because we have a lot of resources to raise awareness about the issue, and engineers see the lack of diversity every single day,” Haried said, “In order to help the women already within the STEM fields, I think that it is beneficial for them to know that there are other people backing them up on campus by trying to change it.”

The project not only aims to make an impact on campus but also hopes to influence the Champaign-Urbana community in a positive way.

“(MakerGirl) serves the parents in the community since they are looking for ways to educate their daughters about opportunities like these,” Enegle explained.

By allowing parents to sit in on the sessions, MakerGirl hopes to motivate them to discover what their child’s passions are and support that ambition.

“Education is all about exposure. By introducing them to this knowledge and career path, they can get a rough sense of what STEM people do and bring out their (child’s) interest in STEM,” Li said.

The project hopes to continue a path toward success by holding four more sessions during the next two months. Even though MakerGirl is a for-profit project, they do offer scholarships to accommodate those with socioeconomic discrepancies, Haried explained.

MakerGirl is a program that sets itself apart through social entrepreneurship, women empowerment and STEM.

“Currently, there is this huge wave of women empowerment, and MakerGirl carries this mission through introducing girls to real STEM technology. But it’s not only the idea of women empowerment, it is also about actually doing something and showing girls what the STEM field is like in the real world,” Li said.

The goal of MakerGirl is to trigger a social change;therefore, they are potentially seeking opportunities of spreading the program to other universities, Enegle said.

Students who want to get involved with the project are encouraged to volunteer or observe a session.

“Our main vision of the program is by 2025 having gender equality and diversity in leadership positions, particularly within STEM fields,” Haried said.