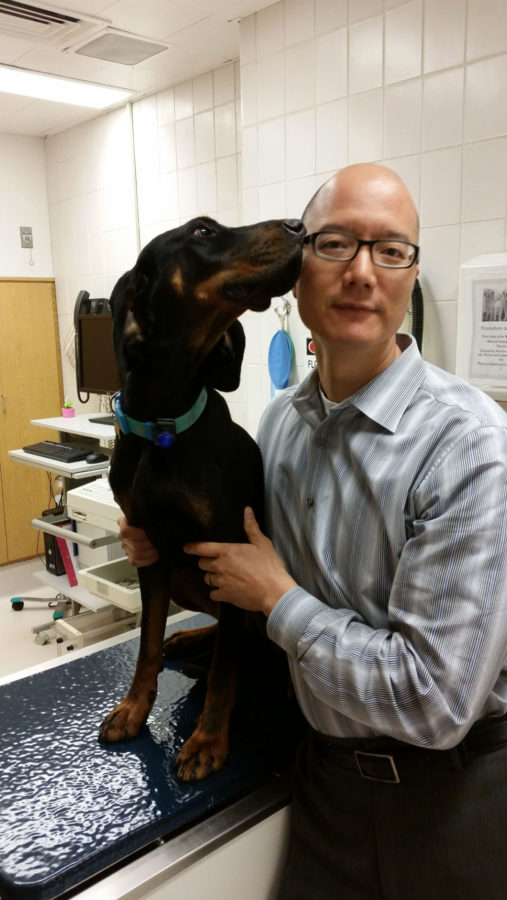 For Tim Fan, Ember was more than just a hound dog.

Ember, who was bred for research purposes, was one of the first dogs used in the process of testing the effects of PAC-1 drugs on dogs, which work to cause cancer cells to self-destruct while preserving healthy cells.

After the studies are completed, most dogs are adopted out by community members or researchers like Fan, a University veterinary oncologist and associate professor of veterinary clinical medicine, who decided to adopt Ember as his own.

Ember is just one of many dogs that was administered the PAC-1 drug in research conducted by Fan and a team of his peers, which is now beginning human trials with the same drug.

The process began when Fan read a paper in Nature Chemical Biology about PAC-1. After becoming interested in seeing how it could help his patients — cats and dogs with spontaneously arising tumors — Fan decided to contact the author, Paul Hergenrother, a University chemistry professor.

Then began the seven-year collaboration between the two. The partnership has developed research allowing their clinical trials to expand past dogs, now conducting trials with human subjects.

Thanks to the research done with dogs, they have been able to find out the best way to administer PAC-1, as well as what drugs it will work with.

“The dogs have been great to give us some confidence about the efficacy of the compound, to explore combinations of the compound with other chemotherapy drugs,” Hergenrother said. “Initially, it was an IV infusion and now it’s a pill.”

Another benefit of clinical trials in dogs is that they differ from the traditional model, according to Edward Roy, professor emeritus and chair of the Institutional Animal Care and Use Committee.

“The way the immune system responds to a tumor is going to be different whether you have to inject cells into the tissue and it starts from that, or if it starts sort of undercover, stealth, with just the mutation of a single cell and it starts growing without the inflammatory response,” Roy said.

As the clinical trials with humans is in the early stages, Hergenrother said he is cautiously optimistic about PAC-1 benefitting humans.

“We’re just hoping to push it forward, we hope it can help cancer patients and obviously the first round of cancer patients are just getting it now, so it’s hard to know until anything happens,” Hergenrother said.

However, it wasn’t the prospect of human clinical trials that drew Fan in, but the idea of providing more therapies for dogs and cats with cancer.

“I think the advantage I have as a veterinarian is that we see dogs as cancer patients,” Fan said. “So many of these dogs with certain types of cancer, they don’t have very good therapies at all available for them, so it seemed to be a natural possibility to move promising small molecules like PAC-1 forward through (mouse) modeling, normal dog studies and ultimately dogs with cancer.”

Healthy dog studies differ from clinical trials because the “science investigators” test the properties of the drug prior to administering it to pet dogs.

Over the past seven years, Fan has had three groups of research dogs in studying the effect of the drug.

Even though some dogs that are used for research come from pounds and shelters, Roy said that was never an option for the team.

Instead, the dogs are purchased from breeders that specifically breed dogs for research purposes.

“We wouldn’t want to use an unknown drug in pet dogs because there are many emotional ties to a pet dog, so ethically, we want to make sure we had a good understanding of how much drug could we give, how long is that drug going to be in the body of a normal dog before we move into pet dogs with cancer,” Fan said.

After a study concludes, Fan and his colleagues work to find homes for the research dogs. Fan himself even adopted a research hound dog — Ember.

“I think that for the most part, most scientific investigators are wanting to try to get homes for these higher mammals,” Fan said. “In particular, with me being a veterinarian and having that animal bond, it’s even more of an overriding goal to make sure that if we’ve done research on these dogs and if they’re still very, very good, then we want to find them good homes.”

Roy said that Fan’s devotion to helping dogs is something he has noticed in others, in spite of the stigma that animal testing carries with it.

“I think that all the people that I know that do research with dogs … are people that have dogs themselves and that care about dogs a lot and who are trying to do something about dog health and human health,” Roy said. “They’re portrayed as people who are doing evil things to dogs, but I have never seen that, in all the years that I’ve been doing research and animal oversight. I’ve never seen these monsters who want to torture dogs.”