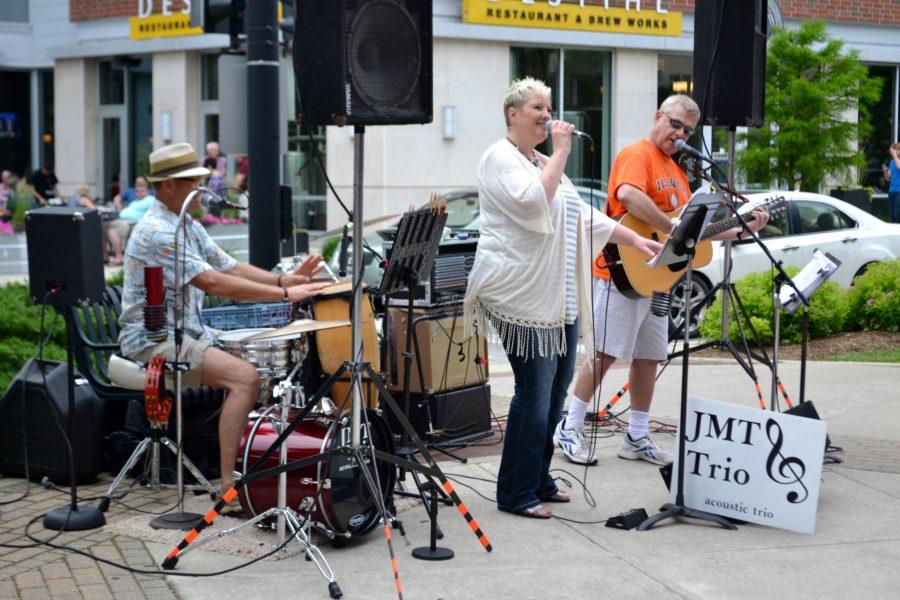 JMT Trio, a country, pop and oldies band, performs for a large crowd in Downtown Champaign during Friday Night Live on Friday, May 29.

Friday Night Live Champaign kicked off its season on Friday. The festivities included performances by local musicians throughout Downtown Champaign.

The event was presented by 40 North 88 West Champaign Community Arts Council. It was supported by the City of Champaign and Champaign Center and sponsored by Midland State Bank, No Regrets Tattoos & Body Piercing and Illini Radio Group.

Judy Lee, who worked the button making stand, said, “I’ve always seen the event on Facebook, but I didn’t realize there were events. I thought it was just a gathering.”

The corners of Walnut and Chester, Neil and Park and Neil and Church streets all hosted performers from 6 to 8 p.m.

Downtown Champaign was also decorated with pink and orange balloons tied to parking meters and light posts with banners for the event.

Erin McKenna, Champaign resident, said, “It looks like a lot of people in the community have come out for it, so that’s nice.”

McKenna said she heard about the event from ChambanaMoms.com and decided to give her new tandem bike a try.

Local businesses said they also appreciated the turnout and the customers the event generated.

Tiffany Square, a worker at Aroma Café, said, “A lot of our customers are students, and when students go, (business is) kind of slow. I would definitely say that this helps make up.”

Almost every outside table throughout Downtown Champaign was occupied. Friends and families came out to enjoy the event.

Friday Night Live Champaign will continue for the duration of the summer, with the last event of the season on August 28.