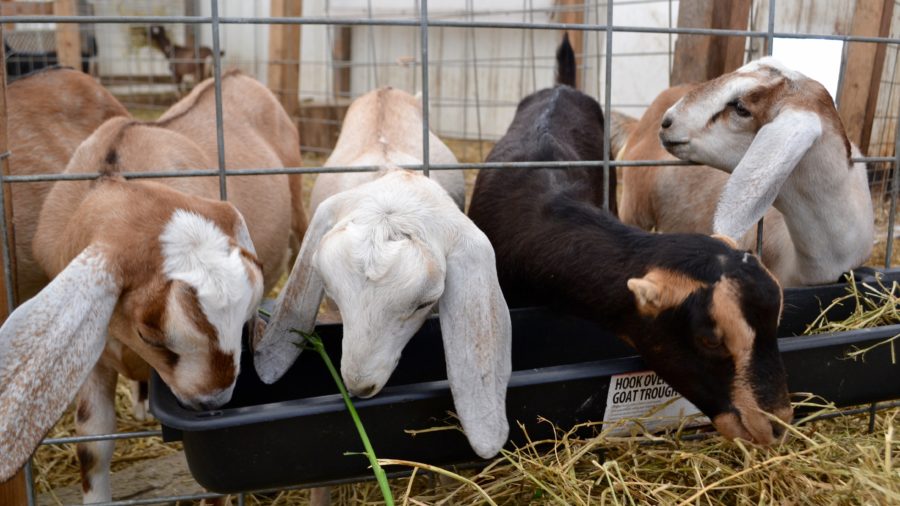 A few goats eat from a trough of straw at the Open House of Prairie Fruits Farm and Creamery on Wednesday, June 3.

Prairie Fruits Farm & Creamery in Champaign hosts a weekly open house during the summer months. The farm offers food, sweets and a chance to see its goats.

At the open house, which is every Wednesday from 4 to 6 p.m., visitors can purchase gelato made on the farm in an assortment of flavors, including salted caramel, strawberry, vanilla and mint. There are also caramels, fresh fruits, cheese and crackers. Visitors can meet the goats that supply the milk for the gelato and cheese.

Pat Syoen, a friend of Jarrell and Cooperband, said, “They went to Italy and got their [gelato] machine and learned how to make it there. So you know you’re getting the best.”

Visitors can wander in the barn to enjoy food and visit with the goats in their tents or sit outside at one of the many picnic tables around the farm.

“Once schools get out, all the kids want to come out and start off their summer with gelato and see the goats,” said Maureen Sullivan, a worker at the farm and a University graduate.

There were two newborn goat kids that had been born just the week before. Other younger goats were roaming in their fences, eating hay, while the older goats lined up to be milked in a separate area.

“I don’t go out too often, but this is a very nice outing for the day,” said Nita Rosenberger, a first-time visitor to the farm.

Open houses at the farm will continue on through early September.

As Sullivan said, “it’s a great place to be.”