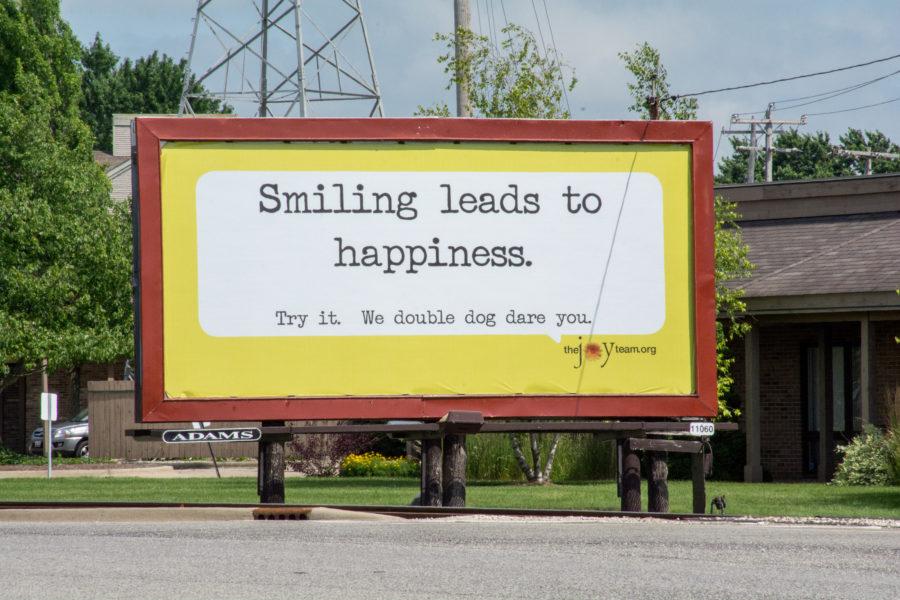 The new inspiring billboard at the corner of Springfield Avenue and Duncan Road in Champaign on Saturday, June 20.

Among the many billboards seen alongside Champaign’s streets, four are particularly unique. They do not advertise a product or inform drivers about safety precautions on the road. Their sole purpose is to brighten someone’s day.

The Joy Team, a nonprofit organization based in Vancouver, Washington, teamed up with Adams Outdoor Advertising to bring a year-long positive message campaign to Champaign.

“I think it’s a great way to infuse some positivity in places where you might not be expecting it,” said Michele Larsen, founder of The Joy Team.

The nonprofit organization was started in February 2010 because Larsen wanted to “put some positivity out into the world.” She also noted she planned to do so in a big way.

Larsen said she and her daughter distributed 75 notes with happy messages on them in November 2009. After doing so, she thought it would be nice to reach a much larger audience, and The Joy Team was started.

Until recently, most of the positive message billboards were spread across Portland, Oregon, which neighbors Vancouver, Washington, and has a larger population as well.

Larsen said putting the billboards up in Champaign was a “happy accident.” Adams Outdoor Advertising had contacted her almost a year ago, showing interest in the project, but starting their partnership never quite worked out perfectly until they contacted her again recently. This time, the timing was great, Larsen said.

“We didn’t think, ‘Oh, let’s go in Champaign,’” Larsen said. “It was just a wonderful exchange between Adams Outdoor Advertising and The Joy Team about our billboards … It’s really neat for us to be able to put some of these messages out further than our local community, which I really love.”

“It wasn’t the right time. We had some change in our market here, and I became the general manager,” Lash said. “That was one of the first things Natalie said to me … so we got on that right away.”

“We need cover for all of our billboards because we don’t leave anything empty, and it’s really fun messaging rather than having something that may be kind of depressing,” Fiol said. “It seemed like an opportunity to do something that would be inspirational and fun.”

According to Lash, the campaign has four billboards: two framed posters and two unframed bulletins made out of a heavier-weight vinyl to last longer.

“We will rotate them throughout the city for the whole year, and that’s what’s great about public service,” Lash said. “You’ll see them around and about.”

Lash said each pair of billboards has one billboard with an inspirational saying and one with a funny saying.

“We wanted one on each size to be inspirational and one to kind of make you laugh,” she said.

Lash also said people need the positive messages that The Joy Team puts on its billboards. She also said the nonprofit’s billboards saved the life of someone who was considering committing suicide.

“It still makes me tear up about it,” Lash said. “I think no matter how things are going, really positive messages make a big difference … and if we can make somebody smile, it’s done its job.

“I’m a big believer in supporting great things, and I think this is a great thing if we can help people, if we can make people feel better, if we can continue to show how powerful outdoor advertising is,” Lash said.

Larsen said she encourages people to share selfies with the billboards on social media using the hashtag #spreadjoy, tagging @TheJoyTeam.

“Positive messages are best when shared,” Larsen said. “That’s how they spread joy.”