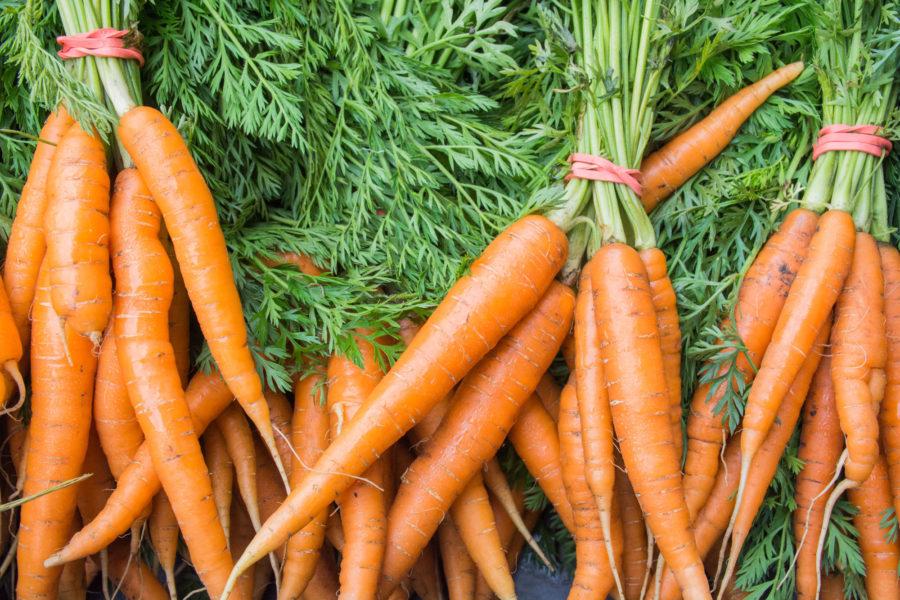 Carrots were one of the many varieties of produce available for pick-up from Sola Gratia, an Urbana community-based farm enterprise, on Thursday, June 25.

Sue Swartz picks at the soil between her fingernails.

It’s 11:15 p.m. on a Thursday morning. Clouds stretch in every direction on the horizon; mud collects along the base of her shoes. Outside, a farmer soaked in mud washes off her overalls.

“I love playing in the dirt,” said Swartz, standing inside a greenhouse and using a three-liter pail to dump soil into a seed tray. “It’s very relaxing, getting dirty.”

This is just another day at Sola Gratia Farm, according to Swartz, who is a volunteer.

The farm follows organic practices, abstaining from the use of fertilizers or pesticides. From summer squash and broccoli to kale and carrots, the farm carries 150 varieties of 50 different vegetables.

“There are names of vegetables I never even knew existed,” Swartz said. “Every week, I come, and I learn something new.”

The farm sells its produce at local farmer’s markets and at Urbana’s Common Ground Food Co-op. Its produce can also be found in menu items at local restaurants, including Big Grove Tavern and Red Herring.

The farm hosts camps to encourage children to implement healthy-eating lifestyles, and utilizes a system called community-supported agriculture, or CSA, which allows the public to purchase and eat half or full shares.

But the 60 farmers, comprised of both volunteers and staff, don’t just gather daily to plant, dirty their hands, and make a profit. They long to make a difference by growing and donating foods to the Eastern Illinois Foodbank.

This is what Gay Holman, one of the farm’s volunteers, loves about Sola Gratia.

Holman has always had a passion for gardening, but when she discovered the farm’s mission through her daughter, she wanted to use that passion to make a difference.

“Hunger is a big issue, not just overseas, but here — especially in central Illinois,” Holman said. “If you can do your little thing in your little area to help solve a problem, that’s important. You’re helping your section of the world be a better place.”

Holman has seen all sides of the farm. She’s been out in the fields in the snow, the rain, and the blistering heat. She has been soaked in mud and covered in sweat. But, while weighing bags of baby kale for wholesale, she said she wouldn’t have it any other way.

“Working with the farm has been really good therapy,” Holman said. “This saves me a lot. It really helps my spirit. I’m inside, outside. I’m doing something for people. This stuff provides food for not only our shareholders but the Foodbank. I feel like I have the best.”

This is the fourth planting season for Sola Gratia Farm, but the grounds behind St. Matthew Lutheran Church have grown produce long before its existence. The church originally grew beans and corn for the Eastern Illinois Foodbank, but when a nonprofit organization called Faith in Place approached the church about making it a community farm, Sola Gratia was born.

“The mission of the church was to help the hungry with that money,” Barkley said. “They hired their first farmer (for Sola Gratia) in 2012.”

So far, the farm has donated almost 20,000 pounds of fresh produce to the Eastern Illinois Foodbank since 2012. Recently, that’s about 30 percent of their total crops each year — and three times more than their intended goal.

Kristin Bosch, president of development and community partnerships at the Eastern Illinois Foodbank, said the foodbank has been helped tremendously by Sola Gratia’s efforts.

“A lot of these families don’t know where their next meal is coming from. Anytime we can get local, fresh produce, it’s a great asset. It goes directly to families in need,” Bosch said. “A lot of times, produce is one of the most expensive items at the grocery store. Being able to provide that to families in need is wonderful.”

But exceeding those goals and providing for the foodbank can be difficult. With uncontrollable factors, such as weather and rain, a lot of the crops are destroyed; thus, they cannot be sold, donated, or distributed. Sometimes, the farm doesn’t know if it’ll make budget.

“It’s an uphill battle every single year because there are so many moving parts. We never know until November if we’re actually going to make budget,” Barkley said. “We want to be able to make our donation, fundraising and community goals.”

Yapp said about five percent of their carrots were destroyed in the recent rainfall.

“With all the rain we’ve been having, the field is flooded, so we did a carrot rescue. We pulled out almost 300 pounds of carrots, got them washed, and got them in the cooler,” Yapp said. “If carrots sit in the water for a long time, there’s so much sugar in them that they just rot.”

But in these extreme conditions, Barkley said she feels closer than ever to her farmers and volunteers.

“You just end up finding humor and supporting each other,” she said. “There are times when you’re just dying after a 12-hour day in extreme heat or up to your nose in mud from pulling carrots out. Often, it’s that camaraderie or teamwork. Working in extreme conditions and seeing staff members and volunteers rise to that occasion is really satisfying.”

Barkley said she’s glad she can get her hands dirty with a purpose.

“I like being part of a mission-driven farm and knowing that this is helping others,” Barkley said “I like working with people and bringing them into healthy eating and being part of a community model that is serving others. I was working in a field for 20 years where some of the projects took five to seven years before I saw any results. This way, you can see very clearly what your impact is.”

Back inside the greenhouse, Swartz and Holman prepare to dirty their hands once more. They crouch down to a container filled with soil and stick their hands inside the dirt. Small circles of ivory skin poke through the rubble, as they wipe the dirt off their hands.

Barkley sneaks up behind them, grabbing the seed trays that Swartz just finished filling. She wants the volunteers to start planting more seeds in them.

She wipes the sweat off her face with her clean wrist.

“How do you expect to get the food if we don’t plant?” Swartz says back with a laugh.

Holman and Swartz have learned a lot from their dirty hands.

“We’ve got so many different personalities, but we come together for one purpose: to grow food for people who are hungry. It’s definitely a faith in place,” Holman said. “We’ve got faith in Sola Gratia.”