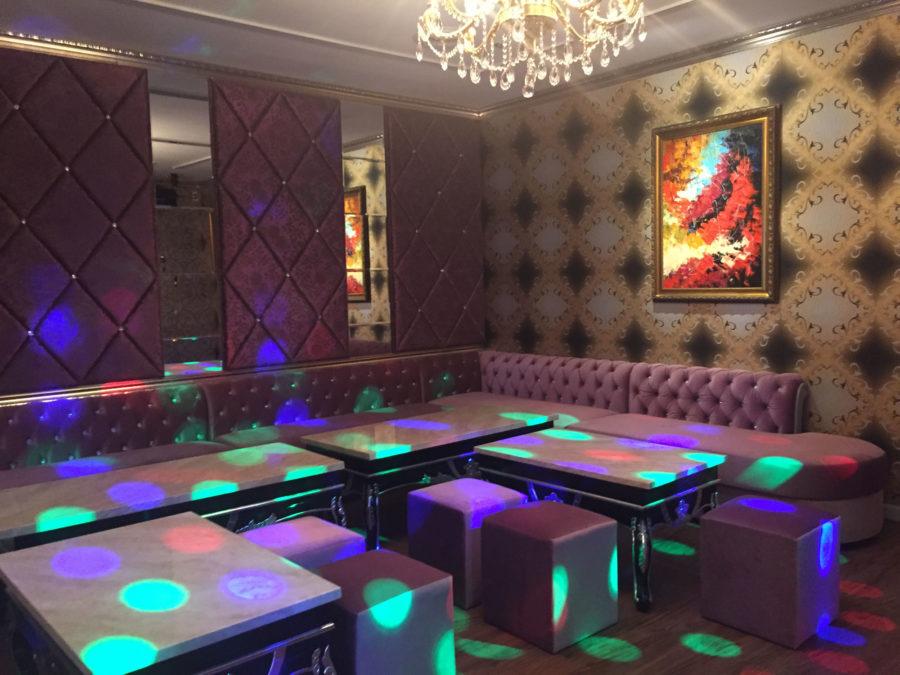 The largest room available, at the A-Plus VIP Lounge Café, uses a chandelier instead of a disco ball.

Plush couches with rhinestone studs, classical art and gilded wallpaper aren’t typically what comes to mind when someone mentions “karaoke,” but these decorate the seven private rooms in A Plus VIP Lounge.

The venue, at 214 W. Main St. in Urbana, has transformed its second floor into a karaoke lounge. The upper level should be open within the month, according to owner Di Yu.

“We want to make it a multilevel business and a flagship for the entertainment for this area,” Yu said.

The combined levels will make A Plus one of the three largest karaoke clubs in the this region of the United States, according to Yu.

Yu, who came to the University to study computer science, said he wasn’t sure how popular the lounge would be with American students.

“This kind of entertainment is very new to them,” he said. “In Chicago, I saw people using the rooms, but they mainly use it as a private room. They don’t sing songs; they just plug in their own iPods to play music.”

To most campus students, karaoke is limited to choosing from a book of songs and serenading everyone in the bar. The setup at A Plus is much more private.

“Asian people get really shy, and they don’t want to sit in front of everyone to sing,” Yu said. “But they feel comfortable with their friends in a small group.”

The rooms in A Plus range from medium to extra-large. They will cost less than $40 per hour, depending on size. Customers will also get a personal waitress and bartender for their room, which is how karaoke lounges are in China, according to Yu.

In China, karaoke is second-best to having tea with family, said Ada Tan, junior in Business. Tan studied abroad in Hong Kong and has family there.

“It’s not just about singing, but coming together,” she said.

Tan went to the busiest part of Hong Kong with her friends, who she said love karaoke and go every month.

A Plus’ karaoke design is based off of KTV, which is a popular karaoke chain in China.

“To Chinese people, (KTV) stands for a certain way to entertain,” Yu said.

All of the décor and systems were custom-ordered from China. After Yu designed everything, he sent his ideas to a company in China. It was shipped from Shanghai to Urbana in less than one month.

“I couldn’t find the furniture that met my requirements here,” Yu said, patting the lilac arm of a velvet booth in the café connected to the karaoke rooms.

The café is a unique addition and will be open during the day, as well as serving late-night karaoke patrons. It will carry traditional bar food, noodles, fried rice and teas.

The café is purposefully painted white with light colors, and Yu said being on the second floor makes it even brighter.

He said this is very different from other karaoke lounges: “They paint the whole place black, so it’s going to be really dark in the daytime.”

Bianca Carbajal, senior in Education, said this was a downside when she went to Star Karaoke in Savoy.

“The atmosphere wasn’t as lively, it was very dark,” she said.

Carbajal added that students would be interested in A Plus because it’s something different.

“Students get bored after a while, and they want to do something that’s off campus, so having something like that is nice,” she said.

Since students have so many options on campus, Yu said the karaoke lounge is made for Urbana locals as well as students.

“It’s going to take them a little while to know this place, but once they come here, they will love it. I guarantee it,” he said.