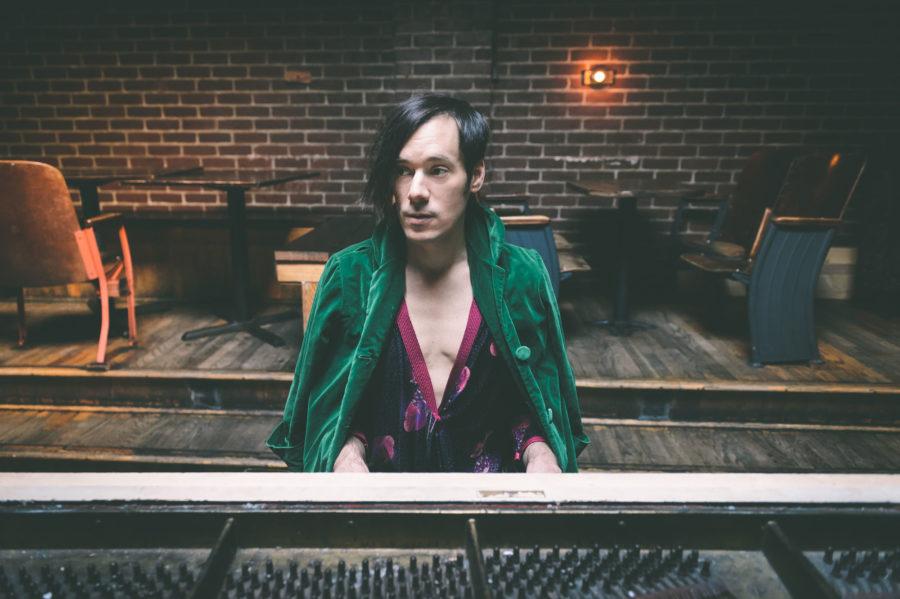 Kevin Barnes, 41, is the lead singer and songwriter for of Montreal. of Montreal will perform at The Highdive on Wednesday as part of the Pygmalion Show Series.

Thirteen is well-known as a cursed number, and on of Montreal’s “Aureate Gloom” — their thirteenth full-length album in 18 years — the darker aspects of life are expressed and examined. Of Montreal will perform with Surface to Air Missive at The Highdive on Wednesday at 8 p.m. as part of the Pygmalion Show Series.

Seth Hubbard, Polyvinyl’s label manager, has worked with of Montreal since they signed to the Champaign-based label in 2004.

“Be prepared for anything. It’s not going to be your standard rock show, whatever it is,” Hubbard said about the show. “It won’t just be a bunch of dudes playing their songs in street clothes.”

The Daily Illini had the chance to talk to lead singer and songwriter Kevin Barnes about inspirations, emotions and the ’70s-funk scene.

Daily Illini: How have you continued to find inspiration for your work?

Kevin Barnes: I don’t know exactly. I mean, really I’m just always looking for new things to explore and new territories to push the band into. I don’t really have a formula or anything like that. I find music infinitely challenging and fulfilling and exciting, so there’s always something new to do or some new twist I can try to put on it.”

DI: Does adding new influences to your music help you stay creative?

KB: I think if there’s something that is consistent throughout, it’s something that exists at the core of my being. It’s like something that I wouldn’t even be able to remove. I think that I often try to kind of defy my own perception of myself, or of my creative self. I always try to become a different person. I want each record to feel like it was made by a different band. That’s another way that sort of helps me approach it with a fresh outlook each time, so I’m not carrying the weight of all the other records with me. I sort of abandon them and move on to a new project, start fresh each time.

DI: What was your inspiration for adding a ‘70s-funk sound to “Aureate Gloom”?

KB: I think it was just the stuff that I was listening to and wanting to make something that felt as cool to me as the things I was listening to. I mean really a lot of the stuff I was excited about at that time was some fairly conventional stuff,  like Led Zeppelin, Black Sabbath, King Crimson. Sort of the early stages of prog and metal, before it became too virtuosic and too ridiculous, but it still has some mystery to it. I’m more of a mid-period Zeppelin fan. The early stuff, when it’s just straight blues, can be a bit tedious, but the riffs are always great. So I think I wanted to make something that had some pretty heavy riffs. Not too derivative of anything, but just kind of cool, badass rock, but then juxtapose that with more personal lyrics, more confessional lyrics, in a way that rock ‘n’ roll normally doesn’t have that level of intimacy to it. A lot of times it’s just kind of like “let’s party; let’s go crazy; blah, blah, blah.”

DI: Is there a reason why “Aureate Gloom” is much more frank and emotional than previous records?

KB: All the records have been kind of personal, but this one in particular I think I used as a form of therapy, like I do often if I’m going through a difficult time period, to escape into music and put all that madness and confusion and anxiety and sadness and passion or whatever into the music and the songwriting. It’s sort of a protective bubble to exist in and analyze things and maybe get some kind of new perspective on things. If you went to see a therapist, maybe they’d help you do that, but I’ve never been able to find a good therapist, so I’ve had to become my own therapist in that sense.

DI: How did recording straight to tape affect the album?

KB: I think you have to do a little bit more pre-production work. You have to know exactly how you want it to be. You can’t really do as much deep editing as you can when you’re working on a computer, so you kind of have to map it all out beforehand. On top of that, you really have to have your chops together. You have to be able to play really well because you can’t really hide behind anything. You can’t hide behind auto-tune and plug-ins and drum replacement. You actually have to play everything, and in that sense it’s really thrilling to just be in a room with your crew and work it all out together and make it all together. It’s way more communal and immediate. We recorded and mixed the record in three weeks and we were all living together in West Texas at this desert studio. The whole experience was really fantastic because just waking up together, going to the studio, working all day, working all night, hanging out all day and night together and then going to bed for a couple hours, waking up and doing it again every day – it was almost like a boot camp or something. At the end of it, everyone felt a little bit drained but also really happy with the experience. It was a bonding experience, a really beautiful experience.

DI: Did that help the record sound more raw?

KB: For sure. Our approach was to make a record the way the bands that we listened to from the ‘60s and ‘70s would have had to make a record before there were all these little tricks to get around being good at your instrument. You actually had to be good at your instrument, and you had to be a good singer, and you had to memorize. We’re just trying to get back to that state, which I think is a pretty magical place, like the records that I listen to most are the records from that time period, the ‘60s and ‘70s. The level of musicianship is so high. The vocalists from that time period are crazy good. Everybody’s so good, everybody’s so gifted, and it’s basically because you couldn’t fake it, so anybody you know, anybody you’ve heard on the radio is actually really great.

DI: What made you want to add a political voice to the album?

KB: I feel like whenever I tried to do it, I’d feel kind of preachy and it doesn’t feel natural for me. But that song, I think I sort of wrote it unconsciously. I wasn’t really thinking, “Oh, I’m going to write this political song.” I was just sort of touched by the Arab Spring and the movement and thinking about the human element of it and thinking about the underdog trying against all odds to defeat the evil, fascist situation that they’re under. I think that it was basically just kind of a song for the underdog and people who are standing up to oppression of all kinds. It’s fairly universal. It’s not necessarily about one specific group of people. I named it “Bassem Sabry” after the journalist who was basically murdered, but he’s sort of, in my mind, just kind of an archetype of someone who’s so brave and standing up against oppression in that way.

DI: It has a much more universal message, as opposed to being focused on one person.

KB: Definitely. And also, dealing with the complexities of certain situations, like in Syria, for example, or in certain place where you don’t even know who to support because both sides seem evil in their own or dangerous in their own way. There’s not like a clear cut “these are the good guys, these are the bad guys.”

DI: Did you have any other inspirations for the album?

KB: Definitely like ‘70s New York art scene, New York music scene, literary scene from the ‘70s was a big inspiration. I went to Manhattan. I lived there for a couple weeks to write material for the record because I felt like even though Manhattan of 2014, when I was out there, was not really in any way comparable to that time, from the ‘70s, when it was so much more dangerous and just so much more alive in a way. It’s still an exciting city, but it’s become Disney-fied in a way that it wasn’t really like that back then. But it’s just kind of fun to sort of wander around and imagine myself, wandering around the Village and passing Chelsea Hotel and thinking about all the cool, crazy stuff that went on during that heyday. So that was definitely a big inspiration for me too. People like Richard Hell, Patty Smyth, the New York Dolls, Television, Talking Heads and those bands. Times Square, it’s kind of like a mall in the Midwest or something. You read about Times Square from the ‘80s and early ‘90s, it was a dangerous, crazy place where all these druggies and prostitutes and hustlers would hang out, and now it’s basically just Sbarro and Olive Garden and Applebee’s.

DI: Will the setlist be primarily from the new album?

KB: We’re definitely going to be drawing from the last seven or so records, and also probably some newer stuff, like unreleased stuff. So it’ll be a pretty eclectic mix.

DI: Are you working on a new album?

KB: We are, yeah. We have pretty much all the songs written, and we’re just chipping away at the recording. We have almost everything started, and we’re working in my home studio this time, so we can take our time. We don’t have crazy deadlines or anything. The goal is to finish the record by the end of the year.

DI: Will the ‘70s-funk inspiration for the album be included in your live show?

KB: Oh yeah, definitely. I think the funk will definitely be in attendance. It’s going to be a fun tour. Now that I’ve sort of gotten past the darkness of the last year or so, I feel much happier and much lighter. I think the performance should be a lot of fun. I’m excited because, I don’t know if you’ve seen one of our shows before, but we a pretty interesting visual side to the performance. We have performance artists and really transportive, hallucinogenic visuals. That and the costume changes and that stuff make a fun, theatrical event.