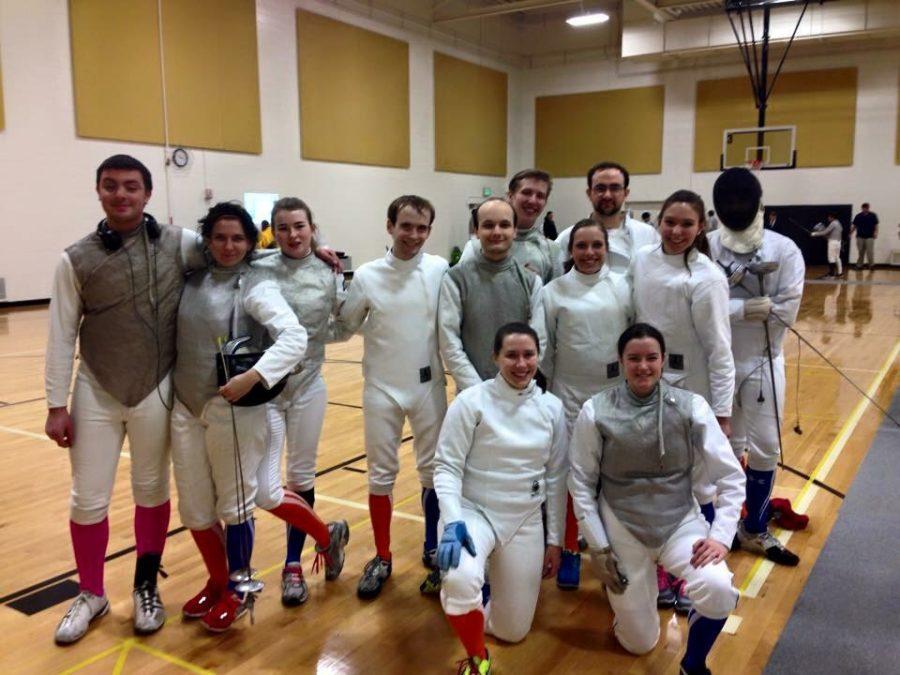 The Fighting Illini compete at a competition at Purdue University. The RSO has participated in fencing competitions across the country.

The Fencing Illini divide up into three sections: foil, épée and saber. In a full facial mask and heavy, white clothing, the team strikes at each other’s masks, gloved hands and torsos. When a member makes contact with their teammate’s body, a red light on a score board goes off.

While the team normally keeps score during a game, practice combines both the sport and team bonding.

Maddie Wallace, sophomore in FAA and president of the Registered Student Organization, leads her team in these pre-practice workout drills.

“It’s the second-safest sport in the Olympics, after badminton,” Wallace said.

These warm-up drills include moves like high knees and butt kicks. While the team runs around one of the gyms in The Point Fencing Club, located at 500 N. Walnut St. in Champaign, light pop music plays, such as Taylor Swift’s “Blank Space.” After warm-ups, it’s time to get into uniform.

In each of the three events in fencing — épée, foil and saber — each event has different rules and uniforms. Foil’s sword bends easily. The saber sword is bigger and is made for slashing one’s opponents. And épée’s sword is the biggest out of them all. While the usage of metal swords might seem daunting to some unfamiliar to the sport, not one of the members of the Fencing Illini are intimidated by them.

Wallace, who is from around the Champaign area, got into fencing when she was in junior high.

“I didn’t like other sports my junior high had,” she said. “I knew Champaign had a fencing club and wanted to try it.”

She then took time off from the sport during high school, but she missed it so much that she joined the Fencing Illini her freshman year. This year, she became the president.

While the team is relatively small in size — around 15 members — they are all dedicated to the sport. Practice starts at 7:30 p.m. Monday through Friday and goes until around 10 p.m. each night. Monday nights are reserved for practicing foil; Tuesdays are for saber; Wednesdays are for épée; Thursdays are called “Fencing Illini” nights where actual practice matches are conducted; and Fridays are open fencing. On Oct. 3 and 4, the team will compete at Ohio State University, and on Oct. 17, the team will travel to Bradley University. From these competitions, the team moves on to the United States Fencing Association competitions in hopes of getting ranked.

“There are no tryouts,” Wallace said. “We encourage members to go to classes (offered through the club). Fencing is a lot of fun, and it’s great exercise. We all have a good time.”

Ted Culbertson, saber captain and junior in Engineering, has been fencing for seven years, starting in middle school and continuing into high school.

“It’s a unique opportunity because it’s a fringe sport,” Culbertson said. “We get close.”

When they aren’t in practice or preparing for competitions, the team holds bonding events, such as ice cream crawls.

For Jack Nelson , freshman in Engineering, the RSO could allow him to continue an activity he’s been a part of since high school.

Nelson is particularly looking forward to the close bonds that the team forms.

“The energy when the whole team is cheering you on is different from all the other sports I’ve ever done,” he said. “It’s often your teammates who make you better.”

Katie Bora, senior in LAS,  is unlike most of the other members of the Fencing Illini. Bora had no fencing experiences prior to seeking out the RSO on Quad Day her freshman year.

“I wanted to try something new. The people are amazing and it’s good for your health. It makes you think and works out your body. You feel really good about yourself after,” she said.