Kill the Cup campaign comes to University this October 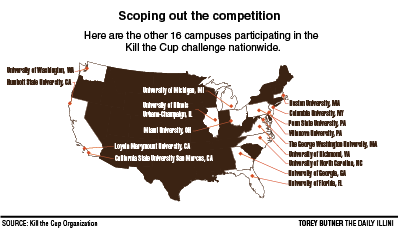 From the hot chocolate that melts the bitterness of winter, to the double shots of espresso that students crave during finals week, these delectable drinks have become a vital necessity to students on campus. The disposable cups containing these drinks, however, can actually do more harm than good.

Kill the Cup, an organization that advocates for environmental change through the reduction of single-use cups, has challenged the University to join what they consider to be the nation’s largest reusable cup contest.

“Our goal is to reduce waste through disposable coffee cups and use it as a way to educate consumers about sustainability,” said Drew Beal, co-founder of Kill the Cup.

From October 5 to 30, Kill the Cup will host a challenge involving 16 universities nationwide. The challenge invites students, faculty members and staff to unite in using reusable cups instead of the disposable ones given at most cafes. The university that outperforms the others will receive a reward of up to $1,000 in social-impact grants to fund a sustainability project of their choice.

Kill the Cup began as a graduate school project at the University of California, San Diego in 2013. Their goal was to change the problem of convenience and create a more environmentally sustainable habit. By offering prizes to those who used reusable cups, they hoped to make a meaningful difference on their campus.

”Everyone knows that it is better for the environment, but no one was actually changing their behavior,” Beal said. “It’s the little things that you can do everyday that can build up and have a significant impact.”

After the reduction in disposable cups the campaign saw at its starting university, Kill the Cup decided to offer the same opportunity to other campuses. Therefore, in 2014, they began to spread the competition to other universities throughout the nation.

“I didn’t just want it to be an environmental thing. I wanted it to be a fun thing that anybody can get into,” Beal said. “I thought of it as a lot like the March Madness basketball tournament. Teams of students and universities that care about making an environmental impact can come together.”

This year, the University has been invited to join the madness and attempt to win this environmental challenge. The competition is measured through social impact and waste diversion. In addition to using their cup at their university’s participating cafe, students should upload a photo of themselves with their reusable cup to the campaign’s app.

“We identified this competition as an excellent opportunity to get students mobilized around reducing waste on campus in the form of the ubiquitous disposable coffee cup,” said Katie Pollman, Kill the Cup student ambassador and senior in LAS.

Sohinee Oswal, Kill the Cup student ambassador and sophomore in ACES, also believes this challenge is a good opportunity to create a social movement toward a beneficial lifestyle.

“Students at U of I care about the environment, and this challenge gives students an easy and tangible opportunity to create a positive impact, which we believe can last far beyond the duration of this campaign,” Oswal said.

The public can get involved with the competition by visiting the Espresso Royale on Goodwin and Oregon with their reusable mugs throughout the month of October. All students willing to post a “selfie” on the Kill the Cup app will also be entered to win weekly prizes and a grand prize.

“This opportunity is unique because we have the support of the non-profit Kill the Cup and all of the resources that come with that partnership,” Pollman said. “It is a special opportunity to be able to implement these resources at the local level and be able to create change for our own campus community.”

By getting students more involved to win the competition, both Pollman and Oswal hope to use the grant money as a way to develop other waste reduction initiatives on campus. Specifically, they hope to purchase reusable bags for students, and in turn, reduce the amount of single-use plastic bags.

“The goal is that this awareness will lead to sustainable change, and students will continue to bring their reusable mugs long after the competition is over,” Pollman said. “Ideally, they will then think about how they can apply this concept to other aspects of their lives: reusable grocery bags, water bottles, etc.”

All are invited to join the “Kill the Cup 2015 at UIUC” Facebook page to receive any updates and opportunities to win prizes.

“The Kill The Cup campaign gives students a glimpse into many actions that can be taken to reduce waste on our campus,” Oswal said. “We hope this will catalyze a consciousness towards a less wasteful lifestyle.”