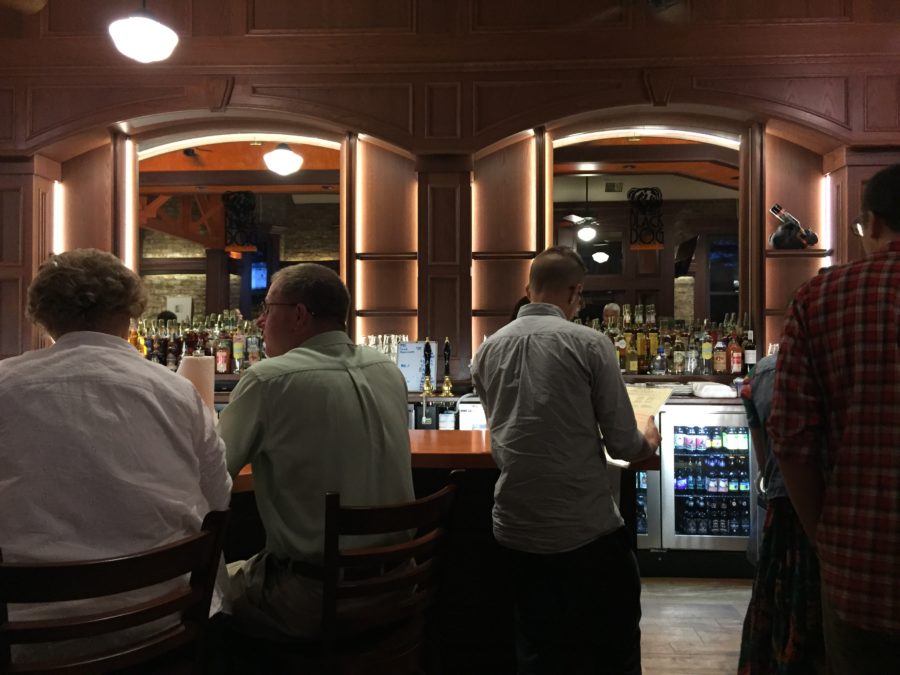 If the wind is right, the sweet smell of barbecue from Black Dog Smoke and Ale House can waft all the way to Illinois Terminal.

As of Thursday’s grand opening, Black Dog’s location at 320 W. Chestnut in Champaign is now serving their award-winning dishes with full dining room and bar service.

Black Dog began its Champaign expansion by opening for carry-out only in May. They had a limited menu and were only open Thursday, Friday and Saturday. The restaurant will be closed Monday and Tuesday for staff training, but will then be open seven days a week.

The new location ran into a few speed bumps, missing its projected August opening by a month due to reconstruction and renovation.

But spending time on the larger building seems to have made a positive difference.

“We pretty much got seated as soon as we got in,” said Kelly Senters, Ph.D. student in Political Science, who took her parents to the grand opening.

Kelly said she had gone to Black Dog’s original location a few times, and it was one of her favorite places to eat.

“I’m from the East Coast, and they don’t really have barbecue,” she said. “I hadn’t been exposed to it.”

Though Black Dog’s Champaign location is significantly larger than the original Urbana restaurant, customers were still waiting outside at 7 p.m., and favorite items were sold out quickly.

Her mother, Joanne Senters, said her only suggestion for improvement would be to “have more salmon on hand,” and added that the restaurant ran out of burnt ends around 5:45 p.m., less than one hour after opening.

“We always do that,” Cochran said about the shortage, which is common at the Urbana restaurant.

Some other aspects have stayed the same, despite the location change.

“I like how they’ve maintained the atmosphere,” Kelly said. The orange and brown color scheme is the same as the original, but the former train station’s large, evenly-spaced windows cover the walls and flood the interior with natural light, as well as a view of trains zooming past.

The long building also fits a custom bar which spans nearly half of the wall, where bartenders relay orders down the line.

The large paper pad used in Urbana to reserve a table has been replaced with an iPad where customers can sign in and are then texted when their table is ready. Jim said he liked the electronic system that allows customers to pay at their table, which is also used at the Urbana location.

“That is a benefit to everybody,” Cochran said. “It’s just convenient.”

He said business had been steady all day, as the owners had hoped. Given Black Dog’s close proximity to downtown Champaign, the opening was timed perfectly for the Pygmalion Festival.

“It’s just a relief to have everything done,” he said. “It’s gone as well as we could have asked.”