Run the Jewels and Purity Ring light up Pygmalion stage 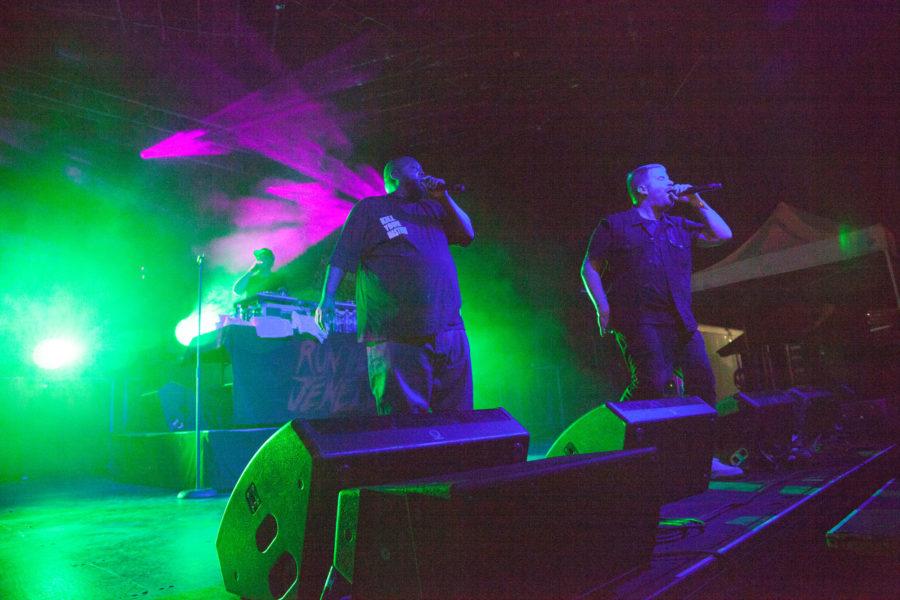 Rappers Killer Mike (left) and El-P of the group Run the Jewels perform on Saturday night as headliners of the Pygmalion Festival.

When two festival headliners performed in succession, The Highdive was lit up in two very different ways.

Guests at the 11th annual Pygmalion Festival were treated with a talent-stacked lineup Saturday at the venue. Run the Jewels and Purity Ring, the top-billed performers, played from 8:20 p.m. to 11:30 p.m. and delivered an odd mix of artistry.

The sky was overcast, but Purity Ring created a space-age, magical sky on stage.

One-hundred twenty-eight strands of color-changing lights hung down, framing an elevated DJ stand decorated with seven crystals and what appeared to be a moon suspended from the ceiling. But the “moon” was a giant drum that lit up when hit, and the crystals also lit up in different colors when played like a xylophone.

The atmosphere was calm during the first few songs of the set, with slow light effects that shifted from rose gold to a mixture of purple and orange reminiscent of a sunset.

The crowd swayed and bobbed with lead vocalist Megan James’ lilting voice and was seemingly hypnotized by her relaxed movements.

James meandered around the stage, weaving between the strands of lights. When she stood on wooden platforms near the front of the stage, her hair blew in the wind, creating an ethereal image backed by hazy lights.

The otherworldly effect remained even when she took a break to address the crowd 20 minutes into the set. She told a story about her memories of their last tour stop in Champaign — sneaking into an orchard and eating peaches. Later, she gasped and pointed out the moon, which was shining through a break in the clouds, and told the audience to look at how beautiful it was.

Not every song in the set was as relaxed, however. During higher-tempo songs, the audience jumped around and threw their arms up, matching a thrumming bass and erratic light effects.

By the time Purity Ring left the stage, the crowd had reached the metal barriers at the back of the outdoor venue.

Their sound only needed one major set piece: the audience.

From the second the acclaimed rap duo of El-P and Killer Mike strutted onstage to Queen’s “We Are the Champions,” the crowd rushed the stage and crushed themselves against the metal guardrails. They screamed along to the pair’s energy-filled lyrics, throwing up the band’s sign — a right hand forming a gun and pointing to a left fist.

In response, Killer Mike looked across the crowd and said, “Let’s burn this motherf—–down.”

If Run the Jewels’ incendiary lyrics didn’t work, the crowd’s excitement would. Security flanked the front of the audience as it surged forward and attempted to knock over the guardrails, while others crowdsurfed in the back.

It was difficult to believe that this was in any way the same crowd who had calmly swayed along to Purity Ring just an hour before.

The rappers were appreciative, encouraging the audience and laughing happily at the crowd’s enthusiasm. They thanked their fans for support and declined suggestions to play anything from their album “Meow the Jewels,” which dropped Friday and features Run the Jewels’ songs remixed with cat sounds.

Part of the way through the set, Run the Jewels brought out rappers from St. Louis, performing in response to the ongoing conflict in Ferguson. The crowd raised their hands in the familiar “hands up, don’t shoot” position.

The duo showed off their well-documented political side — the two said in a BBC interview that “riots work,” and Killer Mike gave a pro-protest speech at a St. Louis concert after the Grand Jury decision.

Throughout the rest of the show, the audience’s energy didn’t fade, and when the act left the stage, the crowd chanted “RTJ” until the rappers performed an encore.

Cheers and “RTJ” rang throughout the venue after the stage was empty and the final note had played.