The Hijab: More than just clothing 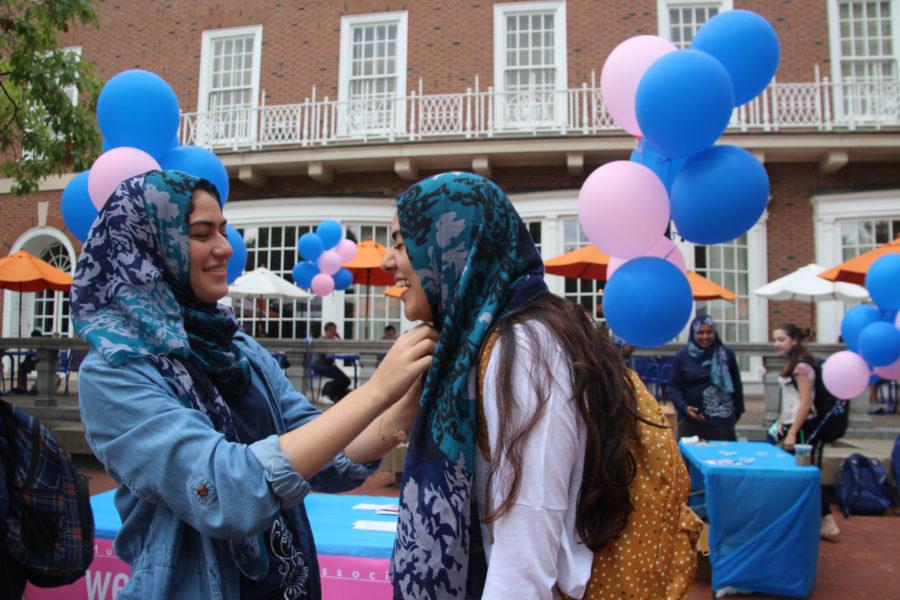 Reema Ghabra, sophomore in LAS, puts a hijab on Aisha Motan, a freshman in Education, as part of the Wear a Hijab Challenge, an event during Islam Awareness Week on Monday.

Although it may come in an array of colors, patterns and textures, the hijab represents much more than just a piece of clothing or a mere fashion statement to Muslim women.

Monday marked the start of Islam Awareness Week, where students in the Muslim Student Association put on a series of discussions and activities on campus. One of these activities is the “Wear A Hijab Challenge.” Starting on Monday, any student could receive a free hijab to wear through Wednesday and reflect on their experience in an open discussion.

Momina Shaikh, senior in AHS and outreach chair for the Muslim Student Association, said that the hijab is a head covering that women in Islam wear as a means of demonstrating their faith and values.

The goal of the “Wear A Hijab Challenge” is to inform through experience, explained Bana Zayyad, junior in Engineering and MSA vice president.

“The challenge tries to capture the essence of hijab by having the participant go to office hours in hijab or order a coffee in hijab,” Zayyad said. “It’s very much a different experience to interact with strangers and friends in hijab rather than wearing it passively.”

According to Sameha Martini, junior in LAS and MSA knowledge chair, the challenge is aimed at dispelling stereotypes connected to the hijab, and allowing students to ask questions.

“(The goal of the challenge is) to give people a glimpse into the Muslim perspective and what it’s like to be a Muslim female that wears the headscarf and to portray and really express the fact that oppression is not connected to the headscarf in any way,” Martini said. “(It represents) someone who wants to fulfill what they believe is an obligation as a part of their faith.”

Beyond answering questions, Shaikh said the MSA wants people to understand what being Muslim means specifically in relation to the wearing of the hijab.

“This might be one of the only times that people might have exposure to Islam,” Shaikh said.

For Martini, wearing the headscarf comes with many expectations from people she encounters outside of the religion.

“I feel like it takes a while before they start to recognize that they should pay attention to what is actually in my head instead of what’s on it,” Martini said. “I have to be extra friendly or trying hard all the time because … I know that I’m a representation of my religion to them.”

Shaikh also explained that wearing the headscarf can prove difficult at times in a society that usually does not promote “covering up.”

“It’s kind of contrary to what the majority of society thinks of as progressive, and progressive women don’t necessarily cover themselves,” Shaikh said. “So I think it’s a concept that is a little bit lost in society and it makes me appreciate it all the much more.”

Martini said that to some Muslim women, the hijab serves as a central part of their identity.

“I think that when you really learn to grow a love for the headscarf and what it means and the symbolism that comes with it, then yeah, it does become something really, really personal and becomes a part of your identity,” Martini said.

The MSA also aims to learn from their participants’ feelings about the “Wear A Hijab Challenge” experience.

“The discussion will serve to collect and capture the opinions of our participants,” Zayyad said. “Everyone experiences hijab differently. So hopefully by sharing everyone’s narration, we can author a story.”

Martini said her personal goal for the event is to spread the word post-experience.

“(I want to see people) challenging themselves to meet new people and to learn about people’s stories before they try writing it themselves.”