Online dating: A match made on your phone 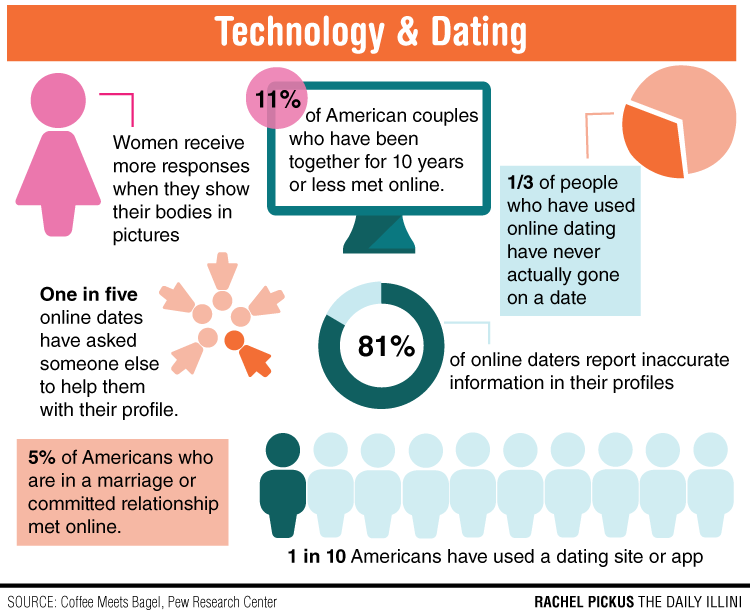 “As anyone who is familiar with the Tinder experience knows, I had the moment where I knew I was going to swipe right and I was hoping for a match to occur right after,” Rockwell said. “Lucky for me, it worked out.”

Rockwell explained that he and his girlfriend had casual conversations on the app for about two weeks. Then, they progressed to texting each other for a week and finally met up. After getting to know one another, he realized they had a lot in common, including the same taste in visual artists and museums.

“It’s really the same way you develop a crush on someone you meet at the bar and then ask to get coffee with after,” Rockwell said.

Since Tinder is mostly focused on “surface attraction,” Rockwell said that it can make the process of getting to know one another easier than confessing attraction in real life.

“Tinder removes one of the hardest parts of getting to know each other, which is admission of sexual attraction,” he said. “It’s nice to get that out of the way.”

“There are myriad dating apps, niche sites, and the like, which has expanded the pool of eligible partners,” Ogolsky wrote via email. “One of the consequences of these options is what I would call decision paralysis. That is, many feel as though they need or want to find the perfect available partner rather than one that might be great. In this context, it can lead to unrealistic expectations and dissatisfaction.”

Ogolsky also said he agrees with Rockwell that Tinder can alleviate some nerves and tension that come with meeting someone in real life first.

“In a lot of ways, Tinder is not all that different from walking into a bar and deciding on who to talk to. It reduces the decision to a simple assessment of attraction, which in some ways is an improvement over complicated matching sites,” Ogolsky wrote.

Corvon Brooks, junior in AHS, said that he has noticed that a lot of University students are using Tinder as a way to meet romantic interests, and he believes the app helps students that don’t have a lot of time to go on dates.

“It’s convenient for when we’re not that busy and see who’s available and match and go off from there,” Brooks said. “A lot of my friends have met on Tinder.”

Yet, Lavine Luo, sophomore in FAA, said online dating can come with a lot of negatives.

“I feel like dating in college is not about the person, but more about the action,” she said. “When you actually go out of college you’re thinking about marriage, looking at a person. More people are looking at a experience over who you’re with and the possibility of staying with that person.”

Rockwell said he acknowledges that online dating has its pitfalls. He he didn’t know his girlfriend’s initial intentions as they were chatting on Tinder, and she later told him she was unsure what he was looking for too, with Rockwell labeling this as a “parameterless relationship.”

Even with the ambiguity associated with the app, Tinder remains popular on college campuses.

“The reason Tinder is so great is it makes a game out of your sexuality. When you see someone you’re attracted to, Tinder can either reward you or punish you,” Rockwell said.