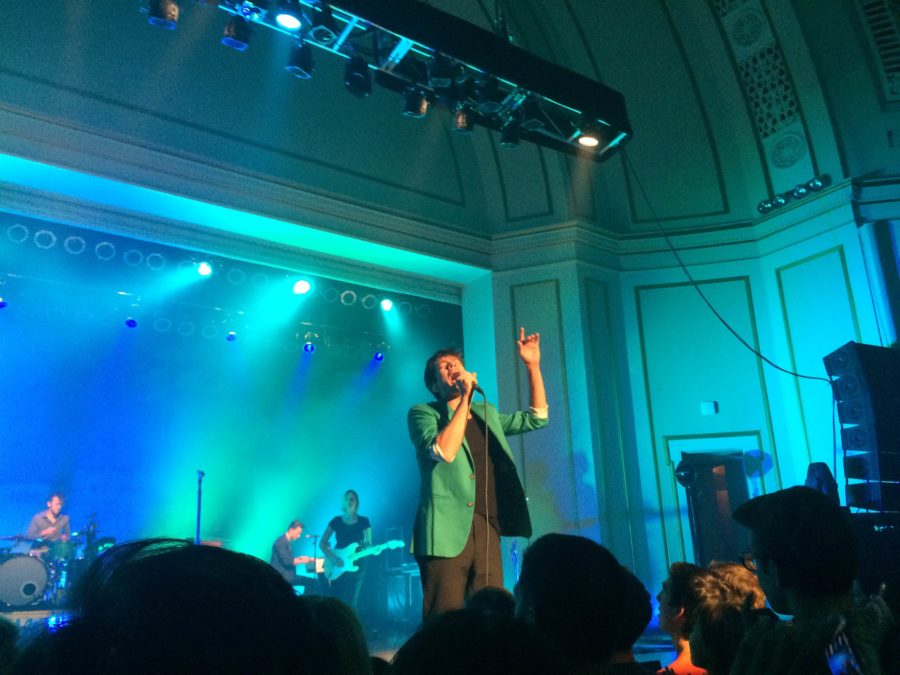 Nate Ruess has been in bands for fifteen years, but his solo show is all his own.

On Sunday night, Ruess — singer, songwriter and lead singer for the band fun. — stepped on the stage at Foellinger Auditorium and lit the room from the moment he started singing.

After a set from indie pop band Saint Motel, Ruess opened his set with “Great Big Storm,” a song from his first solo album, “Grand Romantic,” which was released this past June.

Since releasing “Grand Romantic,” Ruess embarked on his first solo tour, now with the Campus Consciousness Tour. His show appeals to fans from all eras of his musical career, as he played songs from his first band, the Format, from fun. and from his new album.

Dressed in a jade green jacket, Ruess was all over the stage with an infectious, carefree energy. Within the hour and fifteen minutes that he was on stage, he was running back and forth, lifting his microphone stand in the air and standing on top of the piano. He even took selfies with fans in the front row after previously saying that he wouldn’t (“I do not adhere to the popular culture,” he said).

“I know it’s Sunday night. Are you guys here?” he repeatedly asked to a crowd that cheered in response. “Okay, sweet. Me too.”

Ruess stated often how glad he was to be playing music to a crowd that wanted to hear it, and how happy he was in general — and it was easy to tell.

He interacted with the crowd often, talking for long lengths of time about his mannerisms on stage, his decision to make a solo album and even about rooting for Illinois’ football team in Saturday’s loss to the University of Iowa — Ruess was born in Iowa City, Iowa — to which he got a positive response from the audience.

“I was with you,” he said. “But really it was only for the reaction you were going to give me.”

Music from fun. definitely received the most audience interaction, especially the more popular songs like “Carry On” and “Some Nights.” Yet, Ruess visibly enjoyed performing his solo songs such as “You Light My Fire” and “What This World Is Coming To.”

Even with throwing in a few cover songs — Prince’s “Let’s Go Crazy,” Elton John’s “Rocket Man” and Paul Simon’s “You Can Call Me Al” — the crowd was with him the whole time, right up to an emotional rendition of his song “Nothing Without Love,” after which he left the stage briefly.

A few minutes later, Ruess was back for an encore, promising a few more songs to a crowd he felt he could identify with, stating “Midwest is best.” He belted out fun.’s “We Are Young” to end the show, leading the crowd in singing along to the familiar lyrics. But it was Ruess’ happy animation and lively spirit that had the crowd buzzing long after he left the stage.