Elsinore gears up for last show before winter hibernation 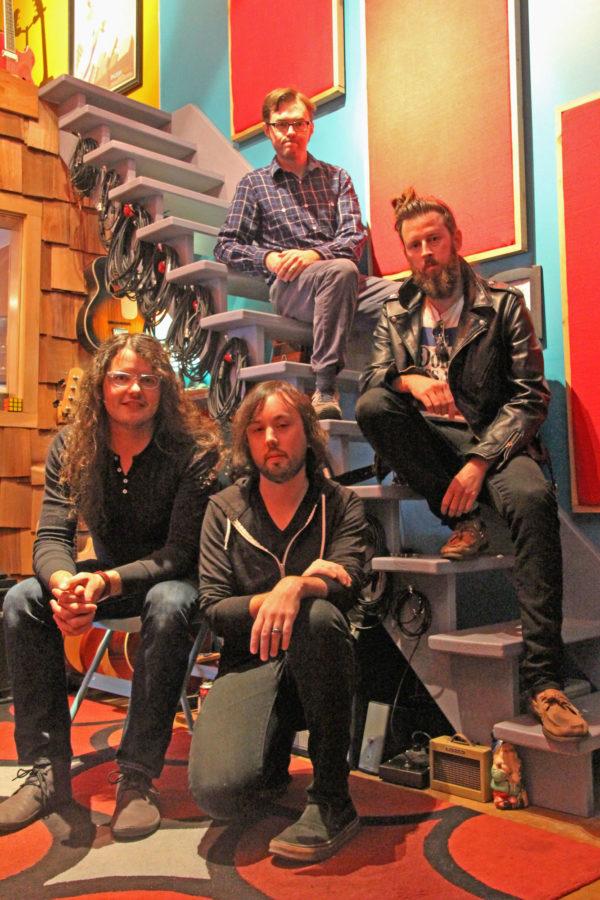 Behind a house located in a quiet Champaign neighborhood stands Perennial Sound Studio, where local band Elsinore will “hibernate” for the winter to continue work on their upcoming new record.

The colorfully decorated studio, owned by Elsinore’s lead vocalist and guitarist Ryan Groff, will be 3 years old this December. Groff said the space is perfect for the band to rehearse, write and record.

“It’s exactly what we need, as some guys in their 30s making music together,” he said.

But before the hibernation begins, the band will perform a big fall show at the Highdive on Saturday — which will also be their last concert of the year.

“We’ll be four musical bears in (the studio) making music,” Groff said. “We don’t want to be tempted to play any shows, so we’re just going to say this show is our last one until the spring.”

Elsinore has been working on their new record for about a year and a half, ever since they came back from their East Coast tour after releasing “PUSH/PULL” in October 2013.

Although they are still writing songs that will be on the record, three of the tracks are almost finished.

“We’ve been just kind of studio junkies for the last year, which is kind of a fun way to exist as a band in this town,” said James Treichler, Elsinore’s drummer. “We still have a fan base that is so supportive, but we can also take it easy and make the record we want to make.”

Groff said Perennial Sound Studio allows them to be that type of group.

“We can take our time. Everything is actually moving pretty quickly when it wants to, and other times, we can give it a break for a few weeks and then come back and add more,” he said. “It’s not like we’re confined to dates that we book at someone else’s studio; our studio is just behind my house.”

Even though they do not have a set deadline for their upcoming record, Mark Woolwine, the band’s keyboardist, said they would probably like to look to the spring for the release of the album. However, he said they would not be mad at themselves if that does not happen.

Woolwine said Elsinore’s teamwork on the new album is “pretty much always a balancing act kind of thing” because they need to juggle their own lives, jobs and families.

A fifth member, Eric Enger, is working with Elsinore on the new album but is not performing shows with the band yet.

“He is as involved and invested in the record as any of us are,” Groff said. “That’s why I say he’s like the secret fifth member, because we don’t know what the future will be, if it will feel right for him to join the band officially, or if he’s just sort of the studio member … He brings a lot of good ideas, experience and studio wisdom.”

Brad Threlkeld, Elsinore’s bass player, said the band started the record off by doing basic demos and pro tools, then moving to big drums and guitars, bass and keys.

“Once we got comfortable enough where the song was, we did … a lot of editing, rearranging and rewriting,” Threlkeld said. “We went into Earth Analog, which is in Tolono, James laid down drums and then we kind of built on that.”

On Oct. 14, Elsinore shot a music video for their single “The Great Communicator” with John Isberg of Swede Films.

“We don’t want to make ourselves or anybody else wait to hear the new songs, so that’s why we’re kind of following the trend today where you’re putting singles with videos out way ahead of the record release,” Groff said. “We’re going to jump on that train because it’s going to be fun.”

Groff said Isberg told him he wants to release the music video before the Highdive show on Saturday, but the band is not asking him to do that because the show is just a few days away.

He said that if Isberg can finish the music video in that time span, that would be great because “it would be a perfect way to launch it,” since it is their “big fall show.”

Two bands from Chicago will open for Elsinore at the Highdive: Santah and The Kickback. The show will be 19 and up, but younger people will still be able to attend if accompanied by a parent. Doors will open at 8 p.m.

“We’ll be playing quite a few songs that will be on the new record,” Groff said. “We’ll probably play every song that we currently have as kind of a big sort of sendoff before the winter hibernation. It’s going to be an amazing show … Everything about it feels really good to me.”