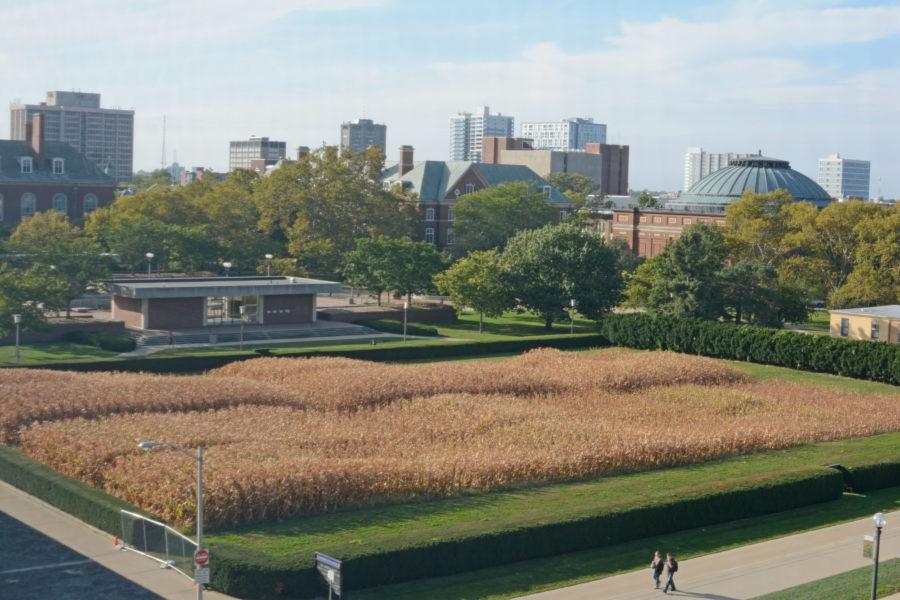 The Morrow Plots, located next to the Undergraduate Library, are the oldest agronomic experiment fields in the United States and include the longest-term continuous corn plot in the world.

The world’s population is growing rapidly, and the Food and Agriculture Organization of the United Nations predicts food production will have to increase by 70 percent by the year 2050.

With limited acres of farm ground, is it possible to feed the world’s population by 2050? Stephen Long, Robert Emerson Professor of Crop Sciences and Plant Biologyss at the University of Illinois, will address the problem of feeding the world by 2050 tonight at 7:30 p.m. at the Spurlock Museum.

The modernization of the nations of the world presents a tough challenge for agriculturalists, scientists and policy makers.

“The reason why (the food supply will need to increase dramatically) is because not only is the world’s population growing, but the population is becoming more urban, eating more meat and wasting more food,” Long said.

According to Long, another problem facing agriculture is the increase in productivity in today’s food crops. Crop yields are not improving as dramatically as they have in the past.

“People have been projecting global starvation for 200 years, and we have largely avoided it by new technologies. Each time (the world) comes close to starvation, some new technology comes along,” Long said.

Professor Long’s research focuses on plant photosynthesis, and he is optimistic that improvements to a plant’s photosynthetic properties could very well be a solution to the increasing demands for food.

For years, scientists have worked to increase the efficiency of many plant properties, but the photosynthetic efficiency of plants has a lot of room to improve.

Long also said the advancement of photosynthesis in today’s major food crops can lead to an increase in the amount of biomass the plant produces. In the 20th century, this aspect of the process drove up crop yields during the Green Revolution.

Long is optimistic that, by further improving the amount of biomass a plant produces through improvements to photosynthesis, similar results can be achieved.

Sustainability and technology are two very common words when discussing the future of agriculture. While technological advancements can greatly improve crop yields, an increasing emphasis is being placed on making sure the world has a sustainable farming system for the future.

Kathleen Holthaus, a local dealer for an agricultural company called Ag Spectrumss, believes that sustainable farming practices will play a large role in the future of agriculture.

“There are a lot of conservation practices out there. Farmers will have to look at a more reduced tillage system and less disturbance of the soil,” Holthaus said.

“One of the biggest hot words when discussing feeding the world is sustainability,” Poole said. “(Sustainability) is essentially making sure the planet and the environment is maintained for future years, how much land we use, care for our land, and using new innovative technologies.”

A current challenge facing agriculturists is the generation of public awareness. While many new advances have come about, some have been met with significant public kickback.

Professor Long said that generating a better public understanding of new agricultural technologies will be important in the future.

“Society is much more resistant to innovation now than 100 years ago,” Long said.