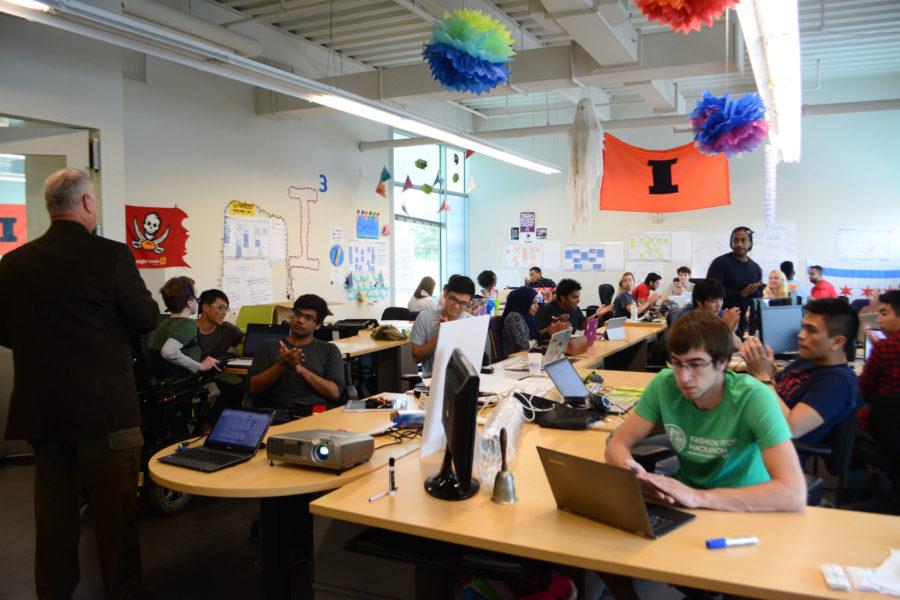 The University was recently ranked as the number 10 undergraduate program in the world for producing venture-capital backed entrepreneurs, according to a Pitchbook report published on Sept. 24RB.

As a part of the University’s thriving entrepreneurial ecosystem, one rising program, the iVenture Accelerator, is the latest addition to this systemRB.

“This connection gives more credibility and legitimizes the fact that University of Illinois students have valuable ideas that are worth investment,” Singh said.

The 13 startups with the iVenture AcceleratorRB — chosen out of 36 applicants to the program — focus on areas such as medical devices, mobile apps and healthcare software.

Though the iVenture Accelerator is relatively new, one student in the program, Mayank Kale, said that it was bound to become the next big program in the University’s entrepreneurial ecosystem.

Kale, a junior in Engineering, and Kyle Hirschfelder, a senior in LAS and Engineering, are the founders of Invoq Health, one of the 13 startups accepted into the iVenture Accelerator program this year. Their startup is building mobile technologies that can be used by community health organizations, and their goal is to continue to create efficient and inexpensive technologies that can better deliver healthcare and data analysis.

Kale said they have been working on developing Invoq Health since June with the launch of the iVenture Accelerator. Since then, it has grown significantly. In just seven weeks over the summer, Kale said that he and Hirschfelder wrote over 100,000 lines of code. Now, their software is deployed through a healthcare organization in India to over 60,000 patients.

“I think one of the biggest things that the iVenture Accelerator did for us was get us to perform at our absolute best, simply because we were accountable to people who were investing money in us,” Kale said. “These aren’t passive investors who care about return on investment, these are people who are running an accelerator from an educational perspective, so their first job is to build entrepreneurs.”

Kale said showing up every day and sometimes putting in 12-14 hour work days kept he and Hirschfelder in check and allowed them to be successful. He said working with the iVenture Accelerator can make it seem as if he is “a full-time entrepreneur and a part-time student,” but that it has been a valuable experience.

In his opinion, the iVenture Accelerator is gearing up to be the program into which all the channels in the University’s entrepreneurial system will funnel.

“It’s going to be the biggest one,” Kale said. “This is where you just either take it off or not.”

John Quarton, the director of the College of Business’s Academy for Entrepreneurial Leadership, said what sets the iVenture Accelerator apart from other parts of the University’s entrepreneurial ecosystem is that it fills a gap they were previously not addressing. Whereas other programs can focus primarily on one type of startup — for example, technology startups — he said the iVenture Accelerator is unique because it is multidisciplinary.

“We have startups that range from technology startups to social startups and your typical commercial-type startups, and to bring them all together under one roof is very unique from our standpoint,” he said.

“One of the things that I think will help us, and we’re working on this actively too, is to create a better branding and communication strategy, both within the University and outside the University, of what entrepreneurship at Illinois is, what it looks like, how to get involved,” Quarton said. “We’re putting some concerted efforts to improve upon that.”

Quarton said doing this will make the University “highly attractive” to prospective students, alumni and the C-U community, as well as Chicago’s entrepreneurial ecosystem.

He said the message that needs to be sent out, generally speaking, is that “entrepreneurship has been and continues to be alive and thriving at Illinois.”

The iVenture Accelerator recently opened applications for 2016-2017RB, which means that more student startups will get a chance to develop their startup ideas, as Kale did.

“I’m an international student, and I always wanted to study in the U.S. because of the entrepreneurial ecosystem, and when I was in high school, I mean, this is what I imagined it to be,” Kale said. “I think it’s a really great thing that they’ve built, it’s definitely going to get a lot better.”