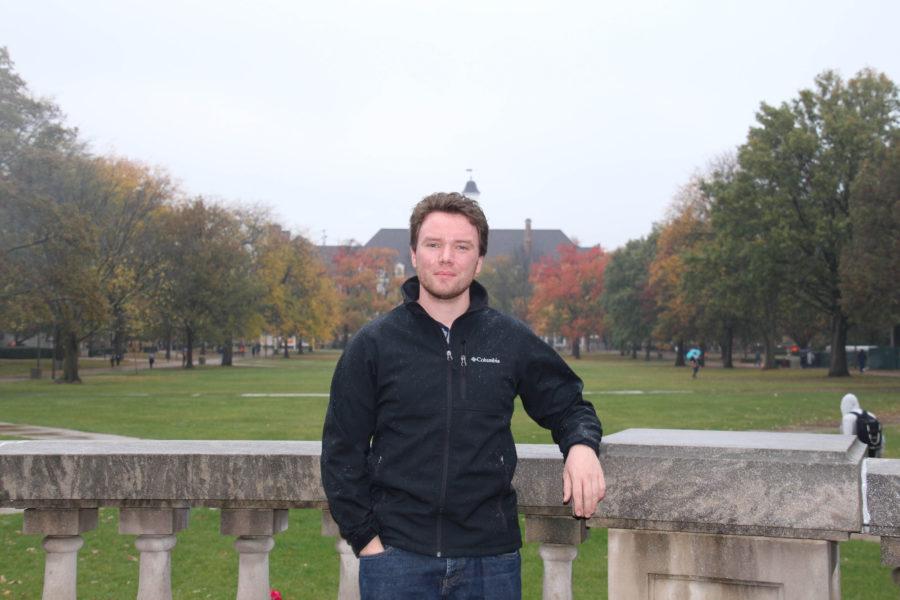 Three weeks ago, a group of about six students sat in a corner table at Murphy’s Pub. Amid laughter and sipping on beer, there was constant chatter in British-English with a few German and Hindi words here and there — it was evident they weren’t from Illinois.

In fact, they were visiting from a variety of countries while at the University for study abroad programs. One of these students was Daniel FriesenRB, a 26-year-old German exchange student pursuing a graduate degree in mechanical engineering.

This is Friesen’s first time in America, and he has wanted to study abroad since beginning college.

“It’s comparatively easy to go (abroad) for half a year as compared to going abroad when you start working,” Friesen said. “I’m pretty late into it … this is basically the last opportunity I got.”

The biggest difference between the U.S. and Germany, according to Friesen, is the society’s mindset and daily interaction with strangers.

“People are just more open to that small talk conversations, like, for example, when you’re shopping for groceries,” Friesen said. “In Germany, you’re lucky if you get a ‘Hi’ out of a cashier.”

But beyond these simple interactions, Friesen said he wanted to study abroad because he wanted more life experience.

“You hear from many people that they went abroad and it changed their mind about what they wanted to do with their life,” he said. “It does something to you and I wanted to experience that.”

Friesen was born in Wuppertal, Germany, and is the only child of two retired opera singers. He later moved to Darmstadt to study at Technische Universität Darmstadt, a research university.

“I’m like the exact opposite (of his parents) — very analytical and the engineering working style fits my style,” he said.

Friesen said he is mostly interested in space and aviation management and came to the University to expose himself to more opportunities in that field. After finishing two bachelor’s degrees — mechanical and industrial engineering — last year, he interned at Lufthansa Technik, an aviation maintenance and repair company, for five and a half months.

“At my home university, we don’t have many space application or space research going on basically,” Friesen said.

He said he hopes to get a better understanding of what exactly he wants to do after staying in the U.S. for a year.

“I thought about staying for a three month internship after this year because it would be quite easy with the visa,” he said. “But depends on how fed up I am of U.S. by the end of this year and what’s bad is that nearly every U.S. aerospace company only employs U.S. citizens.”

Friesen said another reason was to do an internship in an English-speaking country so he could become proficient in the language. He can read and understand English well, since his father is Canadian, but he said he needs more speaking practice.

“The first few weeks were kinda bad … but a few people thought I was from Belgium and London based on my accent, so apparently I’m okay at it,” he said.

In addition to the language curve, adjusting to American food can be a bit challenging for exchange students like Friesen.

“American bread is awful, especially if you are used to really dark, healthy bread, freshly baked or at least … fresh,” he said. “Most of the time (in the U.S.), it is super soft and sweet, I don’t really like that.”

However, he said he was happy to find German bread at Schnucks supermarket in Urbana, which is nearby the Roundtable House properties where Friesen and a lot of international students live together.

Friesen’s friend Alexander Moeller, a 23-year-old exchange student, is also from Germany and is pursuing a graduate degree in electrical engineering.

Moeller also lives at Roundtable House and met Friesen back in Germany when they were both elected for their exchange program. They became members of the same International Student and Scholar Services orientation group upon arriving at Illinois.

Friesen noted that most exchange students have common ground and a certain level of understanding with each other that prevents domestic students from approaching them.

“Most of my friends are also international or exchange students, only a few Americans from my classes because of group work,” said Raphaela Breu, Friesen’s housemate and a 25-year-old exchange student from Austria, studying civil engineering.

In terms of extracurricular activities, Friesen has restricted himself from joining aerospace groups in fear of the time commitment while adjusting to classes. He helps repair bikes at The Bike Project, a non-profit, do-it-yourself space in Urbana that provides tools and resources to repair bikes.

“It can clear your head of complex thoughts, you can just focus on solving that problem in front of you,” Friesen said. “It’s nice to do something with your hands, as compared to studying, which goes on mostly in your head or on a computer.”

As for future trips in America, Friesen hopes to see more of the country. During Thanksgiving break, he plans on taking a road trip to New Orleans in a van with other exchange students.