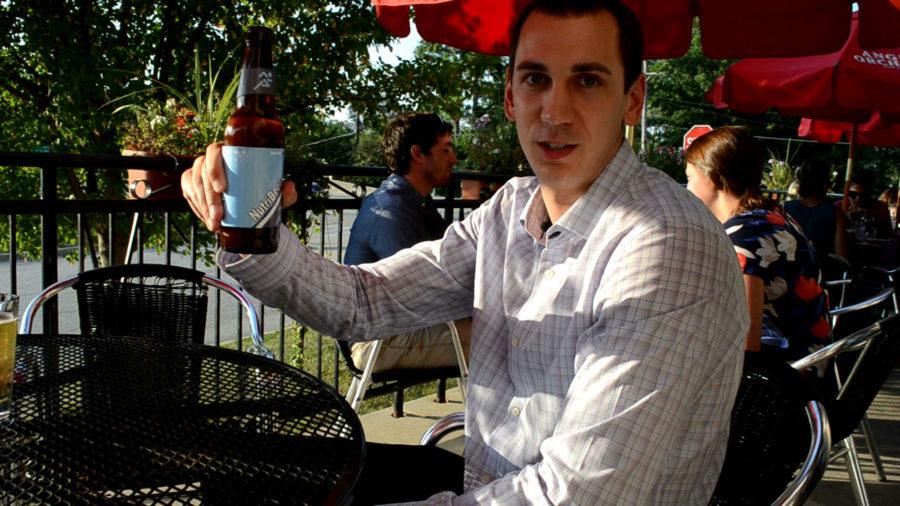 "We just wrapped up a day of filming our kick-starter video and were finally able to relax" - Blake Konrardy.

With exams to study for, parties to attend and clubs to join, sometimes keeping up with fitness in college can be challenging. It can involve working out several times a week, eating balanced, healthy meals and, of course, drinking protein shakes to get nutrients. Yet, is there a way to simplify this regimine?

Blake Konrardy, a 2013 University graduate, believes there is.

After graduating with a degree in statistics, Konrardy got a job working at an insurance company right out of college. But a little over a year ago, an idea took him down a different path.

Konrardy said he regularly works out, lifts weights and drinks protein shakes after exercising. On Friday nights, he would come home, hang out with friends and have a few beers while relaxing. However, he got tired of drinking both his protein shake and beer simultaneously.

“So after that, I decided enough was enough and I have to come up with a solution, so that’s where the idea for protein beer came about, and then I started brewing with that idea in mind,” he said.

The two products Konrardy came up with are Brewtein and Nutribeer. Brewtein is an American wheat ale beer with 7 grams of protein and a higher caloric count, while Nutribeer is a lighter, lower calorie lager beer with a subtle citrus flavor and 4 grams of protein.

When he first started brewing, he didn’t think of it as a business idea. He said he saw the protein beer as something for him and his friends to enjoy. But eventually, he saw the product as something that would benefit many people.

Konrardy is not alone in this journey — his college roommate, Dan Bruzdzinski, also shares his passion for fitness and decided to join the company.

“What better than starting a company with your buddies?” Bruzdzinksi said.

This summer, they officially formed their company. In order to raise funds to move the company forward, Konrardy and his teammates made a Kickstarter page. Although they didn’t quite reach their goal of $40,000 in 38 days, they still managed to raise just over $30,000.

With this funding, Konrardy said the company plans on producing and distributing the beer by partnering up with existing breweries. He said they plan on doing this as opposed to starting their own brewery because it allows them to scale up and produce larger quantities of the product in a faster manner.

Jim Campbell, a 2013 University graduate and one of Konrardy’s associates, explained how the process of pairing with the existing breweries works.

“We give them the recipe, then hire them to brew the beer for us and package it, and then, we take it from them and handle the shipping and the marketing,” Campbell said.

Campbell said he has high hopes for the product, as he believes it has a great taste and is very comparable to regular beer.

“Because it’s whey protein, you can’t really taste the protein as much in the beer, it mixes rather well,” he said. “We brew the beer without protein, we brew it with protein and you’re not able to tell the difference.”

He acknowledged the fact that Brewtein or Nutribeer will not replace protein shakes, as protein shakes can have up to 20 or 30 grams of protein in them. But he said their product will still attract customers.

“I think the other angle of it is that you’ll come home from the gym and have a protein and a beer. Why not kill two birds with one stone and have a protein beer?” he said. “Even if you’re not going to the gym and it’s just a Friday or Saturday night and you’re a health-conscious individual, instead of just having a beer and wasting calories, you’re getting anywhere from 4 to 7 grams of protein.”

Konrardy said he also believes that the product is comparable to regular beer. Yet, he said it took them many tries to get the products to where they are now. He started off by simply taking a scoop of whey protein and putting it in a blender with his beer; however, that turned out not so great.

But the team kept brewing in order to improve the product.

“We kept refining it over time, just brewing batch after batch of beer, in just small 5 gallon batches, and now we’re at a point where I wouldn’t say the recipe is final, but it is at a place where it’s very good.”

Campbell said in the future, they hope to create their very own brewery.

“Way, way, way down the line, that would be the ultimate goal,” Campbell said.

As for right now, Bruzdzinski said they hope the company takes off.

“We just need a couple years to grow and get bigger, but we’re hoping that we can start it out and go from there,” he said. “Shoot for the stars, right?”