Will You Be My Lobster? Alumnus Ahmed Hussain proposes to girlfriend at Arboretum 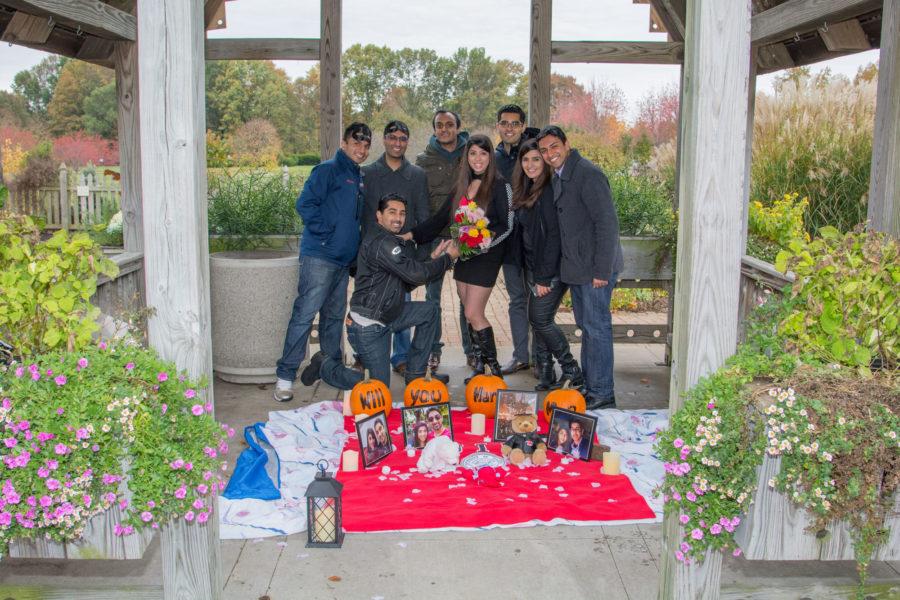 (kneeling) Ahmed Hussain, 2009 graduate of the College of Business, his fiance (with flowers) Munira Charania, a first year MBA student, and their friends and family pose together in the Idea Garden at the Arboretum on Saturday, Oct. 31 after Hussain proposed to Charania.

The Arboretum had an eerie feel this Halloween, with the temperature at a cool 45 degrees as a smattering of droplets fell from the sky. Most of campus was last-minute costume and candy shopping and preparing for holiday festivities to occur later that night. Ahmed Hussain, a University alumnus, however, was preparing for an event of a larger scale: his wedding proposal to his girlfriend of three years, Munira Charania, alumna in LAS and first-year graduate student at the University.

Though Charania and Hussain both attended the University, they never spoke once during their undergraduate years.

They met on May 25, 2012, about a week after graduation. They were both helping with University tours for prospective students when they were introduced by a co-worker. Even though Charania knew Hussain’s sister, a fellow University student, she had never met her friend’s brother. But Hussain instantly knew he wanted to get to know Charania better, and reached out to her on the premise of joining a pre-medical society.

Charania said she was perplexed that Hussain contacted her given that she was an economics major as an undergrad.

“She didn’t know it, but there was another reason why I was reaching out to her,” Hussain laughed.

From then on the two started to talk more, and their first official date was on July 13, 2012. Hussain took Charania on a date in Chicago and gave her a diamond necklace.

“I just remember him not being able to untangle it,” Charania chuckled. “And that he had it in a ring box and I was freaking out.”

That day, Hussain asked Charania to become his girlfriend. However, that September, Charania had to go to Pakistan and planned a return date in January 2013.

Charania told Hussain he could back out, given how hard it would be to be away from each other, but Hussain had no intentions of breaking up with Charania.

“I knew what I was getting into when she told me she was going out of the country,” Hussain said with a smile. “It’s not a big deal if you’re willing to stick it out. It came out well.”

Things didn’t get easier for the couple distance-wise. Shortly after returning from Pakistan, Charania went to work for Hewlitt-Packard in Houston and Hussain got a job with Dell in Chicago. Charania then had to make the decision while she was working about where she was going to graduate school, and when it was time for her to officially commit, she knew what she had to do.

“It was between UT Austin and (University of Illinois at Urbana-Champaign) and I chose here because of him,” she said.

“We weren’t shocked. We knew from just seeing them with each other,” Hassanali said. “If she could put up with him for two years she was definitely a keeper.”

Hussain said he waited until Charania was settled in at school before preparing to propose. Hassanali, friends and relatives of the couple pitched in with the organization, as Hussain really wanted people close to the couple to have a hand in the proposal, even if they couldn’t make it to the event. Friends of the couple all came down to campus, telling Charania that they were coming down for Halloween. Hassanali said he came all the way from Florida to be there.

Charania was told to get ready to go out with friends while Hussain and his crew set up in a gazebo in the Arboretum. Four pumpkins had the words “will you marry me” written on them, surrounded by framed pictures of the couple and two stuffed animal bears hugging. One of the bears was Hussain’s childhood toy.

When Charania arrived, clad in a race girl costume for Halloween (an ode to Hussain as one of his hobbies is studying cars), Hussain played her favorite song “The Man Who Can’t Be Moved” by The Script. He then asked her, “Will you be my lobster?” — a reference to her favorite show “Friends.”

Early in the relationship, she joked that her family didn’t approve of Hussain.

“They were like, ‘You’re dating him? All he talks about is cars!’ And even now, when we drive by apartments on campus I have to be quiet and let him look at the cars,” Charania said.

Hussain said he is grateful that Charania accepts him for who he is.

“She puts up with my childish behavior and my quirks. She’s very caring, very forgiving. She’s very determined and optimistic,” he said. “She is always looking at the good side in every situation. She’s one of the people who I can feel comfortable around and be my real self with.”

“He’s so thoughtful and so understanding,” Charania said.

Hussain kept Charania’s personality in mind when he thought of how he was going to propose.

“I knew I had to do something low-key. She’s a very simple person. What better place than how I met her? Here (on campus),” Hussain said.

As for the Halloween proposal, Hussain figured that the holiday coincided with how often they try to see each other in person, which is about once a month. He thought it was a unique and fun day to propose.

As of now, they’re not thinking of marrying until Charania finishes graduate school in 2017, but they do plan on having an engagement party. The couple’s families are thrilled. Right after the proposal, they called and FaceTimed their parents.

Hussain and Charania’s friends are also ecstatic for the couple.

“She’s an extension of him. They’re really good friends and have good chemistry. I can’t see them not being together,” Hassanali said.