In relationships, communication is key 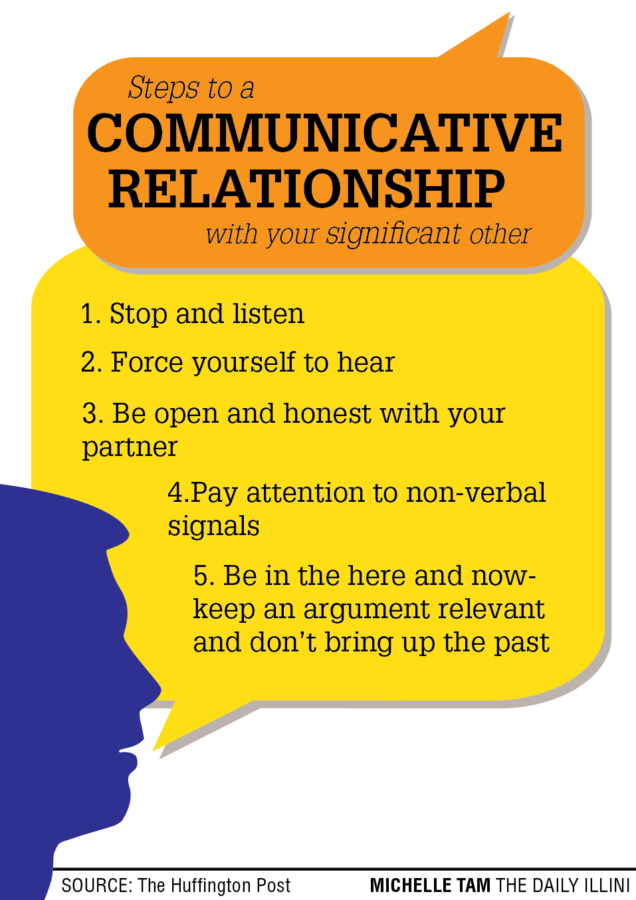 For Matt Miller, senior in LAS, technology has become an important part of the way he communicates with his girlfriend of seven months.

Each day, he communicates with his girlfriend in person but also through phone calls, text messages and pictures on Snpachat. Miller said this communication has helped his relationship grow.

“It’s getting to know people. Communication is the foundation of a lot of things. It helps to understand where people are coming from,” Miller said.

However, an issue many couples face is knowing how to balance how often they communicate with one another.

“It’s different for each couple,” Miller said. “For some people, it’s healthy talking all the time, knowing what the other person is doing all day. It’s how you can be a part of their life.”

Kosenko explains that sometimes couples over share, which can cause problems.

“I do think couples can be too open with each other. There are things that we should keep to ourselves. For example, you wouldn’t tell your partner every time that you see someone who you are attracted to walking down the street,” she wrote.

Junior in LAS Jake Navarez has been in a relationship with his girlfriend for six months. He said it was normal for the two to communicate every day. When they don’t have the chance to see each other in person for the day, they make sure to call each other at night to catch up.

Navarez says couples should be honest with one another about their feelings so as not to create confusion.

“It’s really good to be transparent. You can’t have a feeling on one side and expect the other person to know how you feel. Just sit down and talk to each other, ” Navarez said.

Navarez also explained that communication changes as the relationship progresses. The longer the relationship has been in existence, the more intense of conversations occur, as couples become more comfortable being their true selves with each other.

However, no matter how long a relationship has been going on, it can be easy to develop communication issues. Kosenko believes couples should figure out their weaknesses and try to move past them.

She said couples can argue over a myriad of reasons.

“Some topics, such as sex or finances, might be particularly difficult for an otherwise open couple to address in conversation. Others might find that they know each other so well and share so many experiences that it doesn’t seem like they have much to talk about anymore. In that sense, the length of the relationship could affect communication quantity or quality,” Kosenko wrote.

Ironically, Miller believes fighting can actually be healthy for a relationship.

“It’s a really valuable way to get to know somebody, what makes them tick. It leads to intimacy in resolving stuff and forces you to communicate and be more clear,” he said.

Gender can also affect communication. Sexual scripts, according to Kosenko, are mental roadmaps for how we should act in sexual situations.

“These scripts tell us what to expect out of dates, out of relationships, and out of sexual interactions. The traditional sexual script (in heterosexual relationships) tends to paint the male as the initiator (of the date, relationship, and sex) and the female as the resistor,” Kosenko said.

But Kosenko said there are ways these issues can be solved.