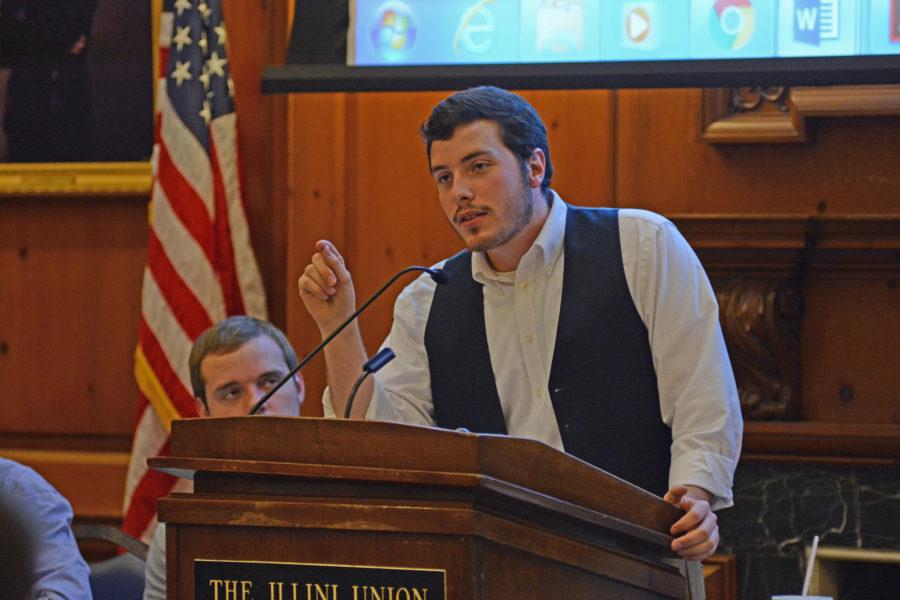 Alex Villanueva opens up the ISS meeting by speaking about the importance of veterans day in the Pine Lounge at the Illini Union on Nov. 11, 2015.

Editor’s Note: This is the second installment in a four-part series about how the tradition of Chief Illiniwek continues on campus despite its ban in 2007. The Daily Illini will focus on why the Chief has remained a prevalent image, and the mark it has left and will eventually leave on the C-U community and those of Native American heritage. See Monday’s edition of The Daily Illini for the next installment, which will discuss the presence and impact of Chief imagery and paraphernalia. Also read parts  one, three and four .

Alex Villanueva sees a void at the University.

With nearly a decade of scandals and recent departures of officials, the void is growing every day.

But he has an idea of how to fix it: introducing a new school mascot.

Villanueva, junior in LAS and senator for the Illinois Student Senate, or ISS, is exploring the possibility of adopting a new University mascot and symbol. A resolution, created by Villanueva and three others, to create a committee for this purpose was passed at the senate’s Oct. 28 meeting. The committee will spend the coming months working with the student body to see if they want a new mascot.

“It’s something that can bring a new representation to our University, especially in this time of distress, of administrative issues, of political issues, of student issues,” Villanueva said. “A new mascot, or at least finding out we need a mascot, could do a great step to finding some unifying factor on this campus.”

Villanueva said the issue of the Chief and whether a new mascot should be chosen has been a tearing point on campus for nearly 10 years.

“Something that is so simple, something that we should all be able to accept and be happy about, has really damaged this University,” he said. “If we want to make this University a cohesive, united campus, I think this is a great symbolic way to start.”

Jay Rosenstein, media and cinema studies professor and American Indian Studies affiliate, said he agrees with the resolution because it could help get rid of Chief imagery for good.

“Not having a mascot creates a void, and something has to fill that void, and what’s filling it right now, I think is all these other kinds of t-shirts … with images of headdresses and things like that,” he explained.

Bennett Kamps, sophomore in LAS, however, said he opposes the resolution because he wants to preserve the Chief.

Kamps, who is currently trying out to be the new unofficial Chief, has attended recent ISS meetings along with members of the Students for Chief Illiniwek Registered Student Organization and Ivan Dozier, the current unofficial Chief and graduate student in Crop Sciences, to speak out against the resolution.

“We’re obviously trying to stop it, but there is never going to be a mascot that goes up against the Chief and makes as big of an impact, especially on alumni. Nobody who ever went here while the Chief was here is ever going to accept that,” Kamps said. “The Chief is never going to die, so why would you compete with that?”

This is not the first time University groups like ISS have asked students if they want a new mascot. In the past, they sent out referendum questions to get the student body’s opinion, and the student body supported the Chief in 2008 and 2013.

This time, however, Villanueva said the committee is going to take a new approach. He believes polls are often not representative of the entire student body, and they want to fairly gain the input of as many students as possible.

“We know that certain groups, be them pro-Chief or anti-Chief, are going to push their bases; they are going to mobilize their bases and make sure their voices are heard,” he said. “Although their voice is important, I want to be able to ask a student at a basketball game what their opinions is … Their voice may not be as loud, but it is just as important as those who make their voices heard.”

To remedy this, Villanueva said they will have meetings to bring out different groups to voice their opinions on the issue. One of the goals of the committee is to bring in experts, historians and faculty from the American Indian Studies program on a weekly or bi-weekly basis for their input.

“That way we can get a real representation of what the campus wants,” he said.

Villanueva said if their survey results show that the campus is ready for a new mascot, then the next step would be creating a new committee that will begin the mascot selection process.

Dozier, however, claimed there will be a problem if a new mascot is selected in the future. Since past student referenda voted in favor of the Chief, he said ISS cannot go back on this decision under Article IX of ISS’ Constitution.

He also said that, due to the current campus climate, it is not the time to try to bring in a new mascot.

“As our athletic department faces recruiting challenges, as the tenure of an undergrad is no longer here than a president or chancellor, we need to be unified,” Dozier said. “Trying to force a mascot on us now would show that the campus is more divided than ever.”

Villanueva said Dozier acknowledged discrepancies, but at the same time, he said they cannot work contrary to the Board of Trustees, who made the decision to ban the Chief in 2007. He also pointed out that Chief supporters have a fair shot like everyone else to vote for their symbol and mascot, but there is little chance the Chief would ever be implemented again.

If a new mascot selection process begins, Villanueva said the ideal mascot should honor the University and state.

“A mascot needs to symbolize who we are as Illini, as students of the University of Illinois,” he said.

Villanueva also said the new mascot should not insult or offend any members of the student body.

Villanueva said he has heard potential mascot ideas swirl around campus, such as wildlife, like eagles, that represent the state. He has also heard of the idea of the “Fighting Lincolns.”

“Which I think is a terrible idea,” he joked.

The road to change could be long at the University, but it is happening at other universities and colleges around the country.

Other universities that have transitioned from Native American nicknames, mascots and imagery include Stanford, Dartmouth, Marquette and Miami University. Most recently, the University of North Dakota began its transition process from the “Fighting Sioux,” a tradition that began in the 1930s, to a new nickname.

Under the same NCAA ban that affected Illinois, North Dakota challenged the decision through a lawsuit, and in 2010, they reached a settlement agreement where the school must now change its nickname and logo to host NCAA championship events. North Dakota could have kept the nickname “Fighting Sioux,” but they did not get permission from one of two Sioux tribes in the state.

Matt Kopp, University of North Dakota student body president, said it has been a long road to change. For many in North Dakota, he said the Fighting Sioux was a way of life.

“People have a lot of pride in that name. It’s been tough. We won seven national division championships, like Division I men’s hockey, with the Fighting Sioux name,” Kopp said.

Kopp said they experienced a lot of pushback from both students and alumni in the name-changing process.

“There’s been a lot of alumni that say I’m not going to give my money to the University of North Dakota anymore. There was actually a group of alumni that filed a lawsuit against the university trying to keep our school’s nickname as just North Dakota and not have a nickname basically, so then we remain the Fighting Sioux,” he explained.

But now that the school is in the final stages of selecting a new nickname — they went from 11,000 potential nicknames to three — Kopp said people are coming to terms with the decision and preparing to vote. In just two weeks, North Dakota will have a new nickname — either the Fighting Hawks, Roughriders or Nodaks.

“People are finally starting to say, ‘Okay, I’m going to vote because obviously it’s going to happen. We are getting a new nickname, so I need to try to participate in the process so that I can get the best nickname possible,’” he said.

If the University begins a new selection process, Kopp’s advice is for everyone to be respectful.

“Have a respectful discourse throughout the whole thing and don’t let things get too emotional because when people start taking these issues on from an emotional standpoint, they end up getting pretty nasty and people that are just trying to do their jobs get hurt,” he said.

Can you manufacture tradition?

Steve Raquel sees one problem with implementing a new mascot at the University.

Raquel, an adjunct lecturer in the College of Business and member of the Council of Chiefs, who served as the Chief in 1993, said it is difficult to manufacture tradition.

“You can’t say, ‘You know what, now we are going to be called the Eagles.’ Or ‘Now, everytime at halftime, we are going to have a red ball thrown on the court.’ That’s tradition. Sometimes it works, sometimes it doesn’t,” Raquel said. “But endearing, cultural, very engaging things that colleges around the country do, those traditions are generations old, and they usually come out of the passion of the student body.”

Raquel cited groups like the Orange Krush, which came out of the student body. He also said that since the alumni base and their support for the Chief is so strong, a new tradition will not be successful.

“Our tradition is so steep over generations,” he said. “It’s really hard to naturally replace it.”

But Villanueva said alumni should think about what is best for future generations.

“(The Chief’s) retired, and he should be considered the University mascot and symbol from 1926 to 2007. The alumni deserve to have that,” Villanueva said. “That was their mascot. But the students on this campus today deserve the same.”

But Rosenstein said every tradition has to begin somewhere, and Chief supporters simply do not think there is an alternative.

“Every team name and every team logo and every team mascot and every team symbol of every team in the world was manufactured, so I don’t know any other way you get a tradition than making something, and then continuing to do it,” Rosenstein said. “I think what they are trying to say but can’t articulate is that they don’t think that anything could replace the Chief.”

In the meantime, pro-Chief groups like Students for Chief Illiniwek are planning on making more appearances at ISS meetings to speak out against the committee.

“We haven’t left, we haven’t given up, and we continue to do things behind the scenes,” Raquel said. “They don’t see it at halftime but that doesn’t mean we aren’t doing something.”

For now, the void will continue. Villanueva asked that students think to the future when considering if they should fill this void with a new mascot.

“The University has become my home, and I’d be very proud if one day my kids come to this University (and) get to experience what I experienced. I’d like them to be able to sit in Memorial Stadium and see something symbolize their university,” he said. “Because we don’t have that.”