C-U community responds to campus discrimination at 'The Vigil' 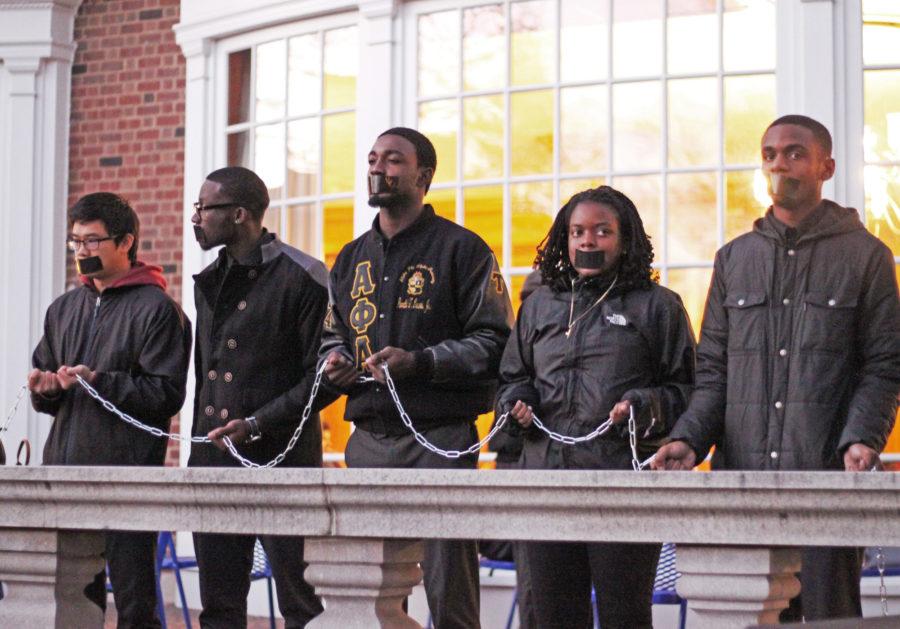 U of I Students gather on the main quad to share personal and anonymous experiences with racial discrimination on campus for the Vigil.

Silence filled the frigid air. Faces were painted with somber and blank looks. The crowd’s quiet demeanor was only broken by an occasional mutter of emotion.

Over 200 community members, faculty and students listened with a quiet alertness at “The Vigil: Breaking the Silence,” as students commented on the acts of racism and discrimination they experienced in the businesses, walkways and classrooms they frequent every day.

The accounts ranged from student-written poems and stories, which recalled specific incidents that stuck with students about religious affiliations, racial identities and sexual orientation.

Romano said the recounts made her feel uncomfortable and she wished to eliminate that discomfort by making the University a better place. She also said she is working on fulfilling requests that students made in the past year regarding the rebuilding of the African-American Cultural House, implementing required diversity training in the curriculum and addressing low minority enrollment.

Although she highlighted the work being done, she also acknowledged the reality of how much more needs to change at the University.

“We’ve got a lot, a lot, of work to do. Your voices and your dedication really make me want to be rededicated to this,” Romano said. “I know this University moves slowly, but I think that’s a good statement knowing that … hopefully it will be a more inclusive place, and you’ll be able to say ‘I made that happen.’”

Feser had similar sentiments, addressing his pride in the students gathering together and disappointment in the University’s noninclusive state.

“I’m really proud to see our students up here. It takes a lot of courage to do what they’ve done tonight and to recognize an injustice and to speak up about it. I’m disappointed that they have to do it,” Feser said. “It’s disappointing that we aren’t the University that is welcoming and intellectually challenging to students from all backgrounds … It’s really important that you speak up like this and that you engage on these topics to solve the problems that we face in making this a truly welcoming University.”

Christensen said trust is key to making a difference.

“We need to continue to build trust with every other student in our community,” he said. “The way we grow as police and individuals is through dialogue, productive dialogue to change things and make them better.

Timothy Morris, junior in LAS and member of Alpha Phi Alpha Fraternity, Inc., who sponsored the Vigil, said the administrations’ responses were interesting.

“It’s definitely a step in the right direction. Granted, I feel like they couldn’t expand fully on the conversation, so some things were minuscule,” Morris said. “But in having these conversations, getting a seat at the table is a first step, and I feel like this program provided this perfect segue into getting a seat at that table and making sure that we dispel these issues.”

Audience member Katerina Newman, sophomore in LAS, said that the Vigil was a great way to put a face to these experiences.

“It’s incredibly profound, and I think that more students need to experience it and to really hear their classmates and the pain they are going through,” she said.

During one of the readings, Ronald Lewis, Alpha Phi Alpha member and junior in Business, explained how his experiences with racism on campus personally impacted him.

“It’s hard to speak on racism to people that you know won’t change. Some people ask me, ‘Why waste my time talking to negligent people about the struggle of minority students?’ I used to ask myself this question all the time, but I found my answer: I’m doing these things for people that come after me,” Lewis said. “I have to keep fighting, so they have things better than what I did when I was on this University.”

Though change is not always immediate or made by the actions of single individuals, Lewis said he hopes to do all he can to make a difference.

“I understand that I don’t have what it takes, but I’m just trying to spark the mind that will,” he said.