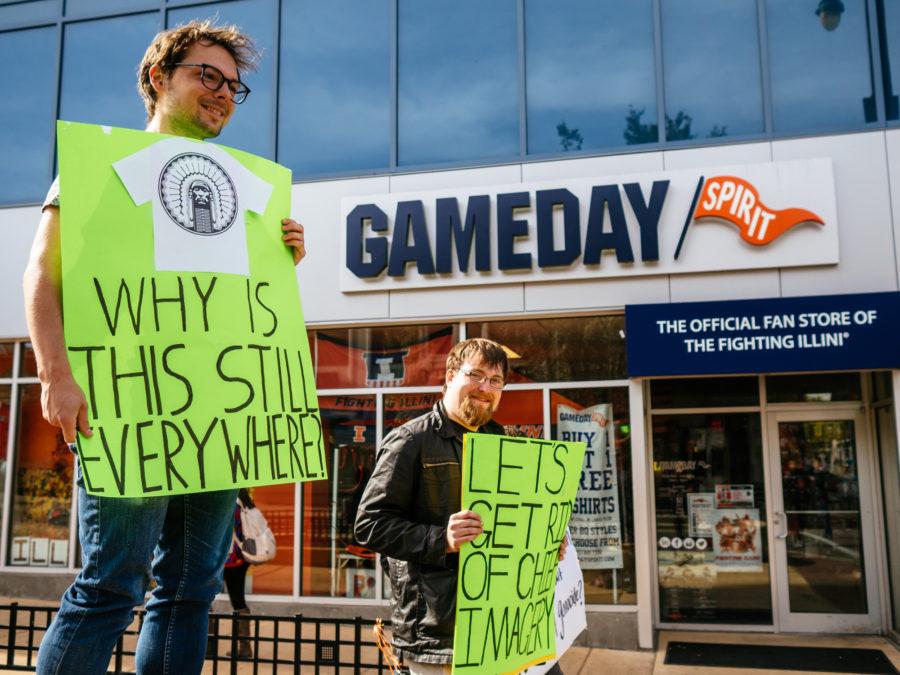 Students protest against Chief imagery in front of Gameday on Monday, Oct 26 2015.

Editor’s Note: This is part three in a four-part series about how the tradition of the Chief continues on campus despite its ban in 2007. The Daily Illini will focus on how and why the Chief has remained a prevalent image, and the mark it has left and will eventually leave on the C-U community and those of Native American heritage. See Thursday’s edition of The Daily Illini for the next installment, which will discuss what the future could hold for the Chief. Also read parts  one ,  two and four .

“It was total disbelief. I could not believe that these people, this community, that I thought was going to be of learners, of students, is engaging in something that is so blatantly racist,” Sandoval said, an alumna of the University.

After the initial disbelief wore off, Sandoval began to feel anger mixed with sadness.

In one of her classes, they discussed how imagery like the Chief was problematic, but after the discussion, students continued wearing the logo to class.

She emailed her Spanish professor to express her concerns about how students wearing Chief apparel in her class impeded her academic success. She went to the Dean of Students to make a formal complaint. Then, she met with an attorney from the Office of Diversity, Equity, and Access.EJ

While these resources offered some advice on how to deal with the situation, Sandoval felt that she had no valid options left that would get rid of the Chief.

She wrote a letter to the administration in which she expressed her “emotional, physical and spiritual pain that seeing the former-yet-still-lingering Chief mascot” had on her. The letter prompted a response from both pro-Chief and anti-Chief proponents, creating a dialogue that offered Sandoval support from the community.

Nineteen months later, Sandoval has moved on to graduate school at the University of Chicago. However, not much has changed in C-U.

The presence of Chief Illiniwek on and near campus remains in the form of merchandise at campus stores like Gameday Spirit and Te Shurt, as well as on murals and pictures at student-frequented bars, like KAM’s and Legends. The logo is even found outside the auditorium at Gregory Hall, with a quote about freedom of speech. During football games, unofficial Chief Ivan Dozier, a graduate student in Crop Sciences, makes appearances in the stands and during the “Three-in-One” song at halftime, when many members of the crowd yell “Chief.”EJ

In 2007, the University’s Board of Trustees made the decision to stop using Native American imagery as the symbol for the University and its athletics along with related “regalia, logo and the names ‘Chief Illiniwek’ and ‘Chief.’” The Board also said in the resolution that it is the job of the Chancellor of the Urbana-Champaign campus to oversee and enforce this. Despite this resolution, there are still ways that the Chief remains on campus.EJ

According to Marty Kaufmann, assistant athletic director and licensing director, the University still owns the trademark rights to the Chief under the Collegiate Licensing Company’s College Vault program. He explained that since 1983, this company has managed all of the University’s trademarks and logos, including the Chief, and only manufacturers, not retailers, can hold licenses to reproduce them on merchandise.

When the Chief was retired in 2007, Kaufmann said they moved the Chief from the standard licensing program to the College Vault, allowing the University to maintain control over regulated production of Chief merchandise.EJ

Kaufmann said they made specific restrictions on the Chief when it was moved into the College Vault. For instance, most manufacturers with an Illinois license can use all current trademarks and logos, including the “Block I” and the names “University of Illinois” and “Fighting Illini.” But for the Chief, Kaufmann said the University made an individual license so they could track it separately and have more control over it. He said they also restricted it to only being sold online.

“It was really just to have an even playing field so all alumni and people across the country could have access to it. It wasn’t necessarily on campus, it wasn’t necessarily in your face. And it didn’t give any retailer really an unfair advantage or disadvantage,” Kaufmann explained.

Kaufmann said they do receive royalties from the Collegiate Licensing Company but only less than 1 percent of these profits came from the Chief logos in the past seven years.

According to a Freedom of Information Act request, during the 2014 to 2015 year, the University received $1.4 million in gross royalties; around 1.7 percent of which was from the College Vault program, and less than 1 percent was from the Chief logo specifically.

Kaufmann’s job revolves around fighting trademark violations, including those involving the Chief.

“We send out cease and desist letters, we’ve bought and received damages and penalties from them and we even in one or two instances have taken legal action,” he explained. “So by maintaining our trademarks on the Chief images, it allows us to try and go after anybody who uses the Chief.”

The University also monitors the Chief logo through campus policy, where Registered Student Organizations can’t use Native American imagery in their designs. Kaufmann works with the Chancellor’s Office and Student Affairs to regulate this.

“Say it was the ‘Tennis Shoe Club’ on campus, and they wanted to make a shirt for the ‘Illinois Tennis Shoe Club’ and just put a picture of a Native American on it,” he said. “Depending on how it is worded, it may not be against trademark law, but it could be against campus policy.”

However, Kaufmann said it can be extremely difficult to catch and police all infringements. For instance, he said online sales are more prevalent now, whether it is student groups like Greek organizations or just fans in general.

He said there are also people who get away with using certain Chief logos that were never trademarked by the University that they can’t control, such as the “profile Chief,” and others who will use Native American imagery by itself without mentioning the University.

However, Kaufmann said he believes if the University didn’t own Chief trademark rights, things would be much worse.

“We just do the best we can to try to prevent them, but if we didn’t at least own trademark rights to the logo, we wouldn’t even be able to do that,” he said. “It would just be open season. Anyone could print anything they want.”

Should the “Three-in-One” be banned?

At Saturday’s football game, the announcer introduced the Marching Illini’s song “Three-in-One,” a 75-year-old halftime tradition at the University.EJ

But to some, it’s another reminder of the presence of the Chief on campus as the crowd traditionally yells “Chief” during the song. Because of these reminders, Sandoval said she didn’t attend University sporting events.

Professor Emeritus Stephen Kaufman recently spoke out against the song, saying it violates the policies of the Board of Trustees and NCAA, the University Non-Discrimination Policy and more.EJ

Jay Rosenstein, media and cinema studies professor and American Indian studies affiliate, said he believes the problem with the “Three-in-One” is not the actual music, but the feelings and behaviors it triggers.EJ

“People were trained from watching the Chief behave in a way that sort of imitates racist things that he does … like walking around with your arms folded and marching like that,” Rosenstein said. “Have you ever seen an Indian person do that in your life? Of course not. It’s ridiculous.”

Rosenstein also gave an example of Holocaust survivors who avoid listening to the music of composer Richard Wagner, whose music was used by the Nazis.EJ

“Anybody who is sensitive to Jewish people and what they had to go through in the Holocaust wouldn’t be having events and playing music by Wagner, even though the music itself isn’t the problem,” he said. “But now it’s permanently associated with Nazis and concentration camps and genocide.”

Freedom of speech: At what cost?

Even though Kaufman said overall sales of Chief merchandise haven’t changed significantly in recent years, one student group called Illinois Community Action Network, or ICAN, has been protesting the Chief imagery sold at Gameday Spirit and Te Shurt this year.EJ

Adam Dornford, member of ICAN and senior in Engineering, explained at one of the protests on Oct. 26 that the organization is trying to raise student awareness and convince them not to purchase Chief merchandise.EJ

“I know that the Chief is not an accurate depiction of what Native Americans are like today and were like in the past,” he said. “Continuing the stereotype of Native American imagery in most popular culture is racist.”

Spencer Walters, another ICAN member and junior in Engineering, said he has seen positive impact from the group’s protests.EJ

“I’ve had a Native American come and tell us that he’s very happy to see this happening because the imagery still exists everywhere,” Walters said.

Dornford said the University should step in, but educating students is a start.

“It’s a bad stain on the University’s record, so I think that the University helping, or at least students helping, to get rid of the image in stores will help the campus at large seem more politically appropriate,” he explained.

Associate Chancellor Robin Kaler explained that since the Chief was retired in 2007, the campus is not going back.EJ Instead, they are looking forward. Just like Marty Kaufmann, she explained that the College Vault program is necessary to control who uses the retired logo.

Alex Villanueva, senator for the Illinois Student Senate (ISS) and junior in LAS, who is helping lead the effort to potentially introduce a new school mascot, said this could help remove Chief imagery on campus.EJ

“If we have a broadly acceptable, cool and exciting new symbol, and the University and its support rally behind it … then you will see the new imagery fit into this void,” Villanueva explained.

Kaler also wrote in an email that, while there is no current process in place, the administration will work with ISS to learn about their potential new mascot search.

Sandoval believes that picking a new mascot is important in replacing the Chief, as well as regulating the use of Chief imagery in a stricter form, if possible.

Stephen Kaufman wrote in an email that he would like to see the administration show leadership to put the Chief behind the University and help bring in a new mascot as soon as possible.

“This will take real backbone and standing up to some members of the Board of Trustees and some politicians, but I am certain Chancellor Wilson and President Killeen are more than up to the task,” he wrote.

For now, the Chief will remain. Sandoval asks people to think about how their love for tradition can negatively affect others, even though it may be hard to let go.

But for Dozier, letting go is not something he wants to do.

“Listen to the people against the Chief. They want to ban the song, the merchandise, the image … everything. They are trying to control what we see, what we hear, what we wear … it’s an attack on our freedom,” he explained.

Sandoval acknowledges the difficulty in transitioning beyond the Chief.

“Admitting that we’re wrong and hurting people is hard … to hear someone tell you that something that you’ve loved for so long is actually pretty racist,” she said. “I think that’s hard for people to accept.”

Charlotte Collins contributed to this report.